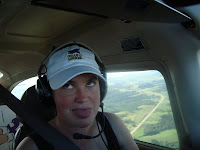 I can't believe the AirRace is over. It seems like I've been gone for weeks, while at the same time I don't want this adventure to be over quite yet... Clearly, though, it was time to pack up. Heather was getting a little loopy. 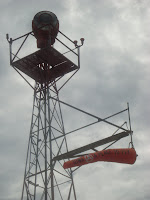 I am SO lucky in that on Sunday (yesterday) I started trying to figure out how I was going to get back to my home in Cleveland, OH, from Atlantic, IA, the terminus of the AirRace. My timing was perfect. In order of preference for my travel home was a nice fast ride on one of my company's jets (pretty unlikely between these two cities), then a ride on one of the racer's airplanes (also unlikely since no team is from Cleveland), then using the buddy pass on the commercial airline - read this post to get an idea of this ordeal) and finally renting a car and driving (expensive and a full days drive). 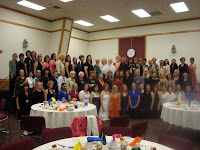 Well, as of the banquet last night, no reposition (empty) trips were showing on my company's website, but the dear twitter friend who supplied the buddy pass did say that there were quite a few empty seats on the Omaha - Cincinnati - Cleveland flights. It would have involved a very early drive from Atlantic to OMA, flying to CVG and sitting for 6 hrs before the flight to CLE (assuming that I actually made said flights). But I was resigned to getting gussied up in my uniform and dragging my bags and Penelope Pilot poster around airports all day. 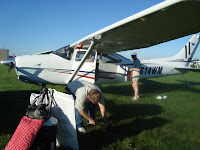 I was trying to coordinate with another racer, Christy, whose husband was going to OMA in the morning and who would be able to give me a ride. In the melee I realized I didn't have his cell number. I asked the maintenance guru, Vern, for the AirRace if he had a phone list (and why) and he asked me if Cleveland was anywhere near Bluffton, OH, where he was planning on making a enroute stop. I had no idea so I looked it up on Google: 152 miles. Might as well have been 1052 for all I'd be able to make it the rest of the way. So what does his friend, Terry, a major AirRace organizer and pilot say? 152 miles is nothing in an airplane! So I am sitting in the back of her Cessna 182 riding back to Cleveland, should be home around lunch! Sweet! 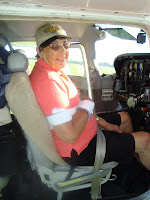 Now this pilot is from FL, so normally Cleveland would obviously not be on the way. But we had a couple of injuries during the Air Race. One woman tripped on the ramp in Sweetwater and damaged her ankle spending the race on on crutches. Another woman, Dottie, fell during the post race activities and now needs her arm immobilized so now cannot even climb into her Archer, much less fly it. So the mechanic, Vern, also a pilot, is flying the Archer to the woman's house in Bluffton while the 182 carries the injured owner back. And then the two pilot friends will continue on to MD, where they are going to spend some post race time. Which makes Cleveland on their way! Make sense? Anyway, it means I have a ride home!

Yeah, yeah, yeah... How did we do in the race?? Well, for first timers not so bad. Heather and I 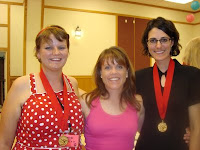 placed 22 out of 34 teams. At least we came away with one award for being the third place on the last leg of the race. The first place winner was Girl With Wings Erin and fifth place was held by GWW Nicole! I am so proud of them.