My Journey to the Air Races

Well, my Air Race Adventure started very early Friday when I had to wake up at 2am to catch a 5:45am flight from Cleveland to Denver. The plan was to use a airline buddy pass to save money because I had just committed to this trip on Wednesday, which makes for a short notice (read: expensive) airline ticket. The buddy pass ended up being $130, but that was ok with me since this airline’s policy was to put folks in First Class first. So my first leg to Atlanta was wonderful up there in seat 2D. I arrived in ATL at 7:34 and had a connection to Denver, where the Air Race starts, at 8:52.

Well, if you’ve never been in Atlanta’s Hartsfield airport, it is the country’s busiest. So this place is never deserted - it is usually mobbed! So I tried not to be nervous about the crowds as I went to the gate for leg 2. There are screens in the airport that list the ‘standby’ passenger list, as I was since I traveled on a non-revenue buddy pass, and I was twenty-something out of thirty-ish. With about 12 seats available. Again, I wasn’t too nervous because many people don’t show up for their flights because they end up not traveling, or make alternate plans, or miss their connection. But it soon became apparent I would not get on. However, I got pretty close, so I was hoping I would have a better shot on the 10:52.

There was still a big crowd, but I was less than twenty on this list, so I was sure I had it. The gate agent even lined up the rest of us “non-revs” up against the wall, scanned us in, and told us to go on board and find a seat. Except there weren’t any. So a United Flight Attendant, a woman whose husband worked for United traveling with her 9 year old son, and I, dejectedly deplaned. The good news is that these folks and I were now “united” in a common goal: to get to Denver. We had all been told that the flights would open up later in the day, so we proceed to the next flight together, the 12:20, and spend time getting to know each other.

Unfortunately, now the number of non revs increased, as many of us didn’t get on that one, which was even oversold so they bumped paying passengers, nor the 1:38pm one either. At least we were having fun spending time together! The woman’s son was amazing. Any other kid would have been whining and groaning about having been in the airport since 6am, but not a complaint out of this kid! The Flight Attendant and I, since we were in uniform, decided to see if we could take advantage of another airline’s policy to let crewmembers fly for really cheap. There was only one seat remaining on this 2:25pm flight, and I let the FA have it since he had to show for work in Denver at 5pm. But before he left, he signed me up for a buddy pass on his airline, so I met the woman and her son at the United gate for the 2:59 flight. No luck.

By this time, we were getting desperate (and really tired). As we waited for the 4:10pm flight, where we were again in the high twenties for a flight that had only single digit seats, we tried to figure out an alternate plan while her son took a nap on the floor. Driving from Atlanta to Denver was not an option, but we wondered if we could at least take a flight to an airport within driving distance of Denver. OR, close enough so that we could go there on Delta and make a connection on United the rest of the way. Wichita, Kansas City, Omaha, Colorado Springs, all oversold. Jackson Hole, WY, available, but we’d have to spend the night, and a $300 hotel room was not in my budget. Cammy called her husband to check flights, I called my contact and we tried to come up with a plan despite the fact that exhaustion was setting in on the adults, too! Meanwhile, the 4:10 flight filled up and left without us. The gate agent here, if not helpful, was at least not hostile. She told us that the 7:10pm and 9:35pm flights were way oversold as well.

Both Cammy and I sat in shock for some time, trying to figure out the best options. It was clear to us we were not getting out of Atlanta, but we didn’t want to spend the night only to have to go through this all again tomorrow! But really, what option was there? So we went to sit at the 7:34 United flight. I had just finished telling Cammy that the second best thing that could happen was that at least she and her son get on this one (a regional jet as opposed to the 737s and 757s we’d been trying to get on) and that would allow me to figure out what to do on my own. And sure enough, they were the last two people called to get on the flight!

I had now been in the Atlanta airport for 12 hrs. I was hungry, tired and a little worried. Although I don’t need to be in Denver until Sunday at the absolute latest (the race organizers were being generous because I was a last minute replacement), the day was a total loss! I still had plenty of things to do for Girls With Wings and our trip. Write a press release, get a webpage built, etc., but I was never in one place long enough to open up the computer and most gate areas didn’t have anywhere to sit anyhow!

I headed on over to the last Delta flight of the day, the 9:35pm, stopping at the Colorado Springs and Wichita gates along the way. If you’ve ever been to ATL, you know that there is no “stopping by” anything. ATL is HUGE, and my body was getting really tired of walking down concourses, taking trains and escalators, while wheeling my overstuffed bags and carrying a 2 foot by 3 foot poster board of Penelope. As the gate area for the Denver flight filled up, I made a decision. I knew that I was not going to get on the Delta flight, so I ran over to the last flight with any airline to Denver, the 10:05pm on Air Tran. The gate area was relatively deserted! Until I started waiting in line, of course. But lo and behold…

…when I got to the counter, I was issued a boarding pass! We were still somewhat far away from the departure time, though. And people just kept coming and coming. I wasn’t going to celebrate until I had myself in a seat and the aircraft door was closed. This did happen, unbelievably, relieving me from finding a place to stay the night and coming back early the next morning to try again.

Embarrassingly, I was only awake long enough to hear the safety brief and 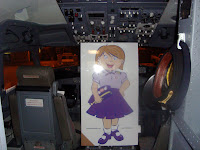 slept until the FA’s announcement that we were preparing to land. I woke up on final to DEN nearly 24 hrs after I had started this trip, with red eyes, bad breath and a grumbling stomach. But I was so happy. My poster of Penelope had made the trip to Denver in the cockpit, so I grabbed her picture and deplaned.

A friend picked me up from the airport and brought me to their house, where I made a horrible guest and went right to bed. Today, I will meet up with Heather and we will start working together on our participation in the Air Race!