Definition of Hanger: A clothes hanger, or coat hanger, is a device in the shape of human shoulders designed to facilitate the hanging of a coat, jacket, sweater, shirt, blouse or dress in a manner that prevents wrinkles, with a lower bar for the hanging of trousers or skirts.
Let us distinguish that from Hangar (commonly misspelled as above): an enclosed structure to hold aircraft in protective storage. Most hangars are built of metal, but wood and concrete are other materials used. The word hangar comes from a northern French dialect, and means "cattle pen."

Hangars protect aircraft from weather and ultraviolet light. Hangars may be used as an enclosed repair shop or, in some cases, an assembly area. Additionally, hangars keep secret aircraft hidden from satellites or spyplanes.

Usually my company will get "hangar space" for us overnight if there is a storm on the way. High winds and hail may damage the aircraft, but

we also get a hangar (rented from the FBO where we are staying), in order to prevent the aircraft from being subject to the elements during the winter. It is more desirable to have the airplane in a warm hangar overnight to avoid the airplane getting snowed on, or worse, icing over. We may negate the need for getting deiced in the morning - which is costly - and we may also prevent the soda cans from freezing and exploding! Plus, the aircraft batteries may need to be removed and kept warm. All in all, we'd rather park it inside. 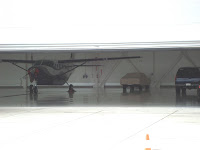 But hangars are used for other than their intended purpose. The above picture shows a hangar we are parked in front of with a truck offering aircraft cleaning services. If you look inside the partially closed hangar door, though, you can see what all is parked inside of this particular facility. Hey, the cars need protection from the elements too! Given that this was southern California, I'm not so sure this was so critical...