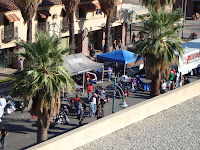 I am pretty lucky in that I am not a picky sleeper. I can usually sleep anywhere. I find it very easy to doze off when I'm a passenger in a car or airplane (I said passenger!), and I can catch a power nap in the crew lounge of the FBOs by curling up in a la-z-boy. I can have my batteries almost fully recharged with 10 minutes of shuteye. The only time I can't do this is if I have a list of things to do and number 3 is take a nap. I keep thinking of tasks 4,5, and 6, and so on. After a few minutes of that, I'll just get up and keep moving.
A lot of people can't sleep in hotels because they are accustomed to their bed. Although I have a great bed at home, I find almost any bed comfortable enough to sleep in, unless it's so soft it's suffocating. It is a bit annoying to get into a hotel bed that is dipped so low on one side (usually the side with the alarm clock) that it takes no effort to get out of the bed because you can just slide on down to the floor. This is why mattresses need flipping and rotating! I don't mind all of the pillows that hotels have, as long as they're not the ones filled with little squares of foam. I like 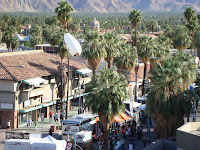 having them all piled up. I especially like that Hampton Inns include a lap tray in their rooms. And MOST hotels have nice enough sheets, too, not scratchy or thin - but I don't like when they don't have a fitted sheet, so that the bottom flat sheet comes untucked from the mattress, and wrinkles up under me. Luckily, my employer puts us up in high enough quality hotels so these items are usually standard. Some of the rooms are suites, which means there are two rooms, one "living room" off the hallway, and the bedroom, which you get to by going through a hallway - farther away from the interior of the hotel and usually quieter.
I try to ask for the top floor, so I don't have Big Foot pounding on my ceiling. I also prefer rooms away from the elevator, because most people continue their conversations coming out of the elevator and quiet down as they get to their room. Oh, and the ice machine can get pretty noisy, 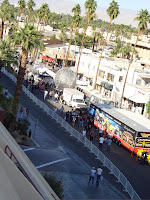 too. Some people listen to their tvs amazingly loud. Earplugs block out most of these sounds, as does turning on the room fan. Every once in a while I need to call the front desk and ask if they can have some one come up to request that the guest can tone it down.

Well, sometimes there's little that anyone can do, especially this tour when I stayed at a Palm Springs hotel right next to their Bike Week festivities. These are pictures taken from my hotel room balcony. There's not much hope for blocking out the vibrations from a loud set of pipes on a Harley. Add to it the entertainment of loud music and a stunt biker riding in a metal sphere, and you're pretty much up the whole night.
You can see the hills, mountains, ?, in the background. I went looking for a place to run in the evening and was told there was a hiking trail I could run on. Unfortunately, this trail was pretty much vertical and had much sand and loose rocks. It was too dangerous to run, so I walked, but the trails started to get less obvious. I'm not found of my bones being found out in the desert, so I 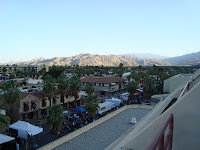 turned around and ran on the streets instead.
So I was pretty tired by the time I had to turn in. The noise hardly bothered me at all and I was well awake by the time the alarm went off at 4am. Ok, I am used to eastern time zone which is three hours ahead, but you get the point...