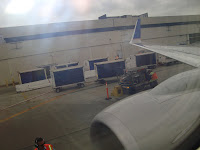 I have talked before about the fuel trucks used to refuel aircraft, but some people may be asking themselves, "How come I never see these trucks when I'm on a commercial flight?" Could you imagine a fleet of fuel trucks trying to fuel all of those commercial airlines at a major airport? It would be a logistical nightmare - and also pretty dangerous. We would not want a collision between a full airplane and a full fuel truck.
I decided to take this picture to the left as my flight to Los Angeles pulled into the gate. The line personnel were already ready to get the plane unloaded, fueled and turned. I thought I would explain that weird contraption under the wing. Well, here I find again that Wikipedia has beaten me to the punch: At some airports, underground fuel pipes allow refuelling without the need for tank trucks. Trucks (or just a cart) just carry the necessary hoses and pressure apparatus, but no fuel.

Next time you fly into a commercial terminal, look for the covers that designate where the large underground fuel tanks. You can also see similar covers at your local gas station. Of course you know that all the fuel coming out of the pump isn't stored right in the box with the pump handle, it has to be stored underground. It's a pretty good idea, huh? No trucks maneuvering around taxiing aircraft, and no need for the trucks to have to continuously refill themselves. The pumps on the carts are portable, to allow for the different configurations of the airplanes.