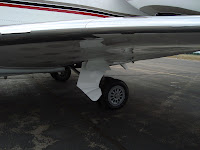 I'll be the first to admit, I don't know everything about airplanes. Not even close. The first aircraft I ever flew, the UH-1 Huey (a helicopter, at that), was the last and best vehicle for airborne transportation I ever knew in and out. Of course, it was also the simplest aircraft I ever flew. My flight school instructor made me recite the names of all the parts as I touched them on the preflight. I hated it then, but it made me pretty knowledgeable.

Every successive airplane has gotten more complex, and the training facilities expect us less to understand HOW they work as opposed to how to PROGRAM them! Where we used to have to know how the ACM 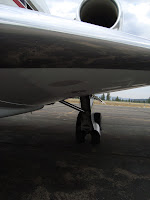 (Air Cycle Machine) worked during an oral exam, now we just need to know that there is one. All of the knowledge in this aviation business builds on itself.

There is also a lot of knowledge that people pick up along the way, depending upon their interest level, experience, mechanical ability, etc. The first jet I ever flew, I don't think I understood what the thrust reversers did until I was through with the course and a captain I was flying with noticed I wasn't using them appropriately. (I discussed TRs before in an earlier post. See Wikipedia for more info: Thrust reversal, also called reverse thrust, is the temporary diversion of an aircraft engine's exhaust or changing of propeller pitch so that the thrust produced is directed forward, rather than aft.) 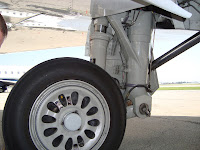 Anyway, back to the gear. The Citation X has trailing link landing gear. I've heard about it in passing, especially after some of my poorer landings. For "whatever reason" it's pretty hard to have a hard landing in the X. So I decided to look up this gear and why it's less likely to have this airplane "slam" on the runway. There's not much to read online, so the captain walked me out to show me how this gear is different from every other previous airplane I've flown.
Basically the strut on the right, or forward, has a pivot point that allows the tires to sink a few inches when the airplane is off the ground and the gear is extended. When the tires touch the ground on landing, it's enough give so that when the second strut, the hydraulic one, comes into play, it's not as abrupt. It used to take a pilot's skill to make a smooth landing, now the gear does it for us!