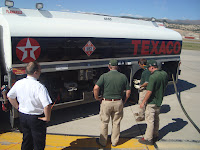 Well, for the second time in my flying career, I had to have fuel taken OFF an airplane. The first time the fuelers forgot to mix PRIST into the jet fuel. The airplane I was flying at the time needed to be defueled at a service base as defueling couldn't be done with a fuel truck, so we had to fly a short distance (not getting high and cold) to get it defueled. Huh? What is Prist and why did we need it?
From Prist Aerospace Products: 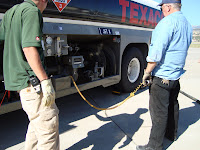 All turbine aircraft fuels contain some dissolved water. It cannot be extracted because it does not exist as particulate water. When an aircraft rises to flight altitude, the fuel cools and its capacity to retain dissolved water is reduced. Some of the dissolved water separates out as discrete water that can form into ice crystals or remain as a super-cooled liquid. When super-cooled water strikes a tubing bend or a filter, it can freeze quickly and block a fuel line or filter. If suspended ice crystals are present, they can also block a filter. Prist Hi-Flash anti-icing aviation fuel additive controls icing in aircraft fuel by depressing the freezing point of water. 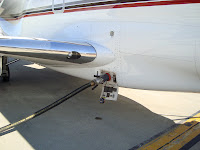 But this time was because we had gotten too much fuel. The paperwork for the flight had assumed that it would be cooler than the actual temperature which limits our maximum takeoff weight for a given length of runway. PLUS, part of the runway was closed (the last 500 feet), which limited our takeoff weight even more. Since we couldn't lessen the aircraft any other way, we had to take off some fuel. We were actually dispatched with enough fuel not to need fuel at an interim stop to drop off one of our two passengers, so this just meant we had to get fuel at the next stop.
So, I got to see the fuelers take fuel off the airplane. It usually is a pretty simple process. Instead of the fuel truck dispensing the fuel, 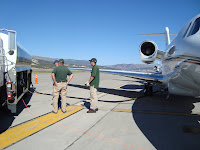 a lever is depressed so it just sucks it back in. However, it wasn't working, and the ground crew was clearly perplexed. Finally a supervisor came over and determined it wasn't working because there was no fuel IN the truck - so they had to go get fuel in the truck and come back to defuel.

In the interim, the passengers showed up, but luckily were hardly inconvenienced. Safety, after all, is the most important principal in aviation.