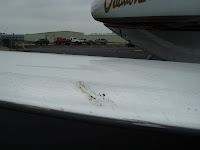 Well, I got to work yesterday and met my new airplane. The captain, on his preflight (checking over the airplane to note any deficiencies), noticed a problem - besides the grey skies and sprinkling of rain! Why can't it rain in Cleveland? Save my lawn, please!
First, let me say that post-flights (done after flying) are just as important as a preflight. I myself have been caught missing something before turning over an airplane to someone else. We can never assume the previous pilot left us with a perfect airplane. And once a pilot signs for an airplane, the issues with the airplane can be transferred to the new pilot; which means also the responsibility and accountability. A story at one of my previous places of employment concerned a crew that had an extremely hard landing at night. They didn't report the damage to the company and the crew that took the airplane the next day started before dawn. It wasn't until it was light that they saw the damage. They were held accountable for flying that airplane with damage that they should have caught! 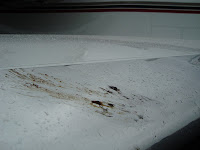 Dark or not - use a flashlight!
Luckily, this was not a major bird strike. It can be a catastrophe when an airplane hits even a tiny bird. I assume the bird just glanced off the wing. It didn't look like much, but close up, you could see the feathers and gore. The airplane underwent an inspection to see if there was any damage.
How bad can an bird strike be? You wouldn't think so bad, since an airplane is so much bigger and more rigid than a bird. I'll never forget the first time I saw an airplane that had hit a turkey vulture on final approach to an airport in Texas (back in my army days). Even though this jet was slowing for landing, that bird hit and went into the vertical stabilizer (or tail). The neck of the bird was stuck about six-ten inches into the metal! I have never hit a bird, but they've scared me before.
Wikipedia: Event description
Bird strikes happen most often during take off or landing, or during low altitude flight. However, bird strikes have also been reported at high altitudes, some as high as 6000 to 9000 meters above ground level. The majority of bird collisions occur near or on airports (90%, according to the ICAO) during takeoff, landing and associated phases. According to the FAA wildlife hazard management manual for 2005, less than 8% of strikes occur above 900 meters and 61% occur at less than 30 m (100 feet).

The point of impact is usually any forward-facing edge of the vehicle such as a wing leading edge, nose cone, jet engine cowling or engine inlet.
Jet engine ingestion is extremely serious due to the rotation speed of the engine fan and engine design. As the bird strikes a fan blade, that blade can be displaced into another blade and so forth, causing a cascading failure. Jet engines are particularly vulnerable during the takeoff phase when the engine is turning at a very high speed.

View of fan blades of JT8D Jet engine after a bird strike.

The force of the impact on an aircraft depends on the weight of the animal and the speed difference and direction at the impact. The energy of the impact increases with the square of the speed difference. Hence a low-speed impact of a small bird on a car windshield causes relatively little damage. High speed impacts, as with jet aircraft, can cause considerable damage and even catastrophic failure to the vehicle. However, according to the FAA only 15% of strikes (ICAO 11%) actually result in damage to the aircraft. The impact of a 5 kg (12 pound) bird at 240 km/h (150 mph) equals that of a 1/2 ton (1000 pound) weight dropped from a height of 3 meters (10 feet).
Bird strikes can damage vehicle components, or injure passengers. Flocks of birds are especially dangerous, and can lead to multiple strikes, and damage. Depending on the damage, aircraft at low altitudes or during take off and landing often cannot recover in time, and thus crash.