During this tour we spent a lot of time taking people to and from Florida from the New York and New Jersey area. After a little while flying up at altitude, our window starts to show frost and ice! 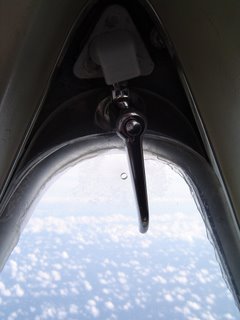 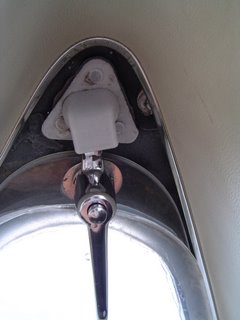 Why is that? You would think, wouldn't you, that the higher you get in the sky, the closer you are to the sun... so warmer, right? Actually the reverse is true, and it's called the environmental lapse rate. The environmental lapse rate (ELR), is the actual change of temperature with altitude of the stationary atmosphere at a specific time and specific location. The ELR at a given place varies from day to day and even during each day. As an average the International Civil Aviation Organisation (ICAO) defines an international standard atmosphere with a temperature lapse rate of 6.5 °C per km (3.57 °F/1000 ft or 1.99°C/1000 ft) from sea level to 11 km. See Wikipedia for more information.

They are talking about the first level of the atmosphere, the troposhere. The envelope of gas surrounding the Earth changes from the ground up. Five distinct layers have been identified using thermal characteristics (temperature changes), chemical composition, movement, and density. Can you name them?


Troposphere
The troposphere begins at the Earth's surface and extends up to 4-12 miles (6-20 km) high. This is where we live. As the gases in this layer decrease with height, the air become thinner. Therefore, the temperature in the troposphere also decreases with height. As you climb higher, the temperature drops from about 62°F (17°C) to -60°F (-51°C). Almost all weather occurs in this region. The height of the troposphere varies from the equator to the poles. At the equator it is around 11-12 miles (18-20 km) high, at 50°N and 50°S, 5½ miles and at the poles just under four miles high. For more information, click here.