Congratulations to Caitlin, who has progressed in her flying lessons thanks in part to the generous donations that people have made to Girls With Wings. The Dreams Take Flight Dreams Take Flight Scholarship is designed to introduce the world of aviation to someone who would benefit from experiencing the joy of flight. The award of this scholarship is intended to fund introductory flight training to encourage achievement of a stated goal, whether in aviation or in another field of study.  There is no prerequisite flight training required for this scholarship, just enthusiasm and the desire to learn. The Dreams Take Flight Scholarship is an award in the amount of $500.00. Read more about our scholarship program. 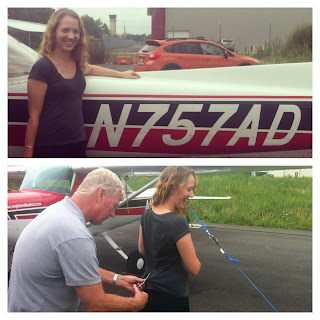 My training has progressed exponentially since winning the Dreams Take Flight scholarship! It’s such an amazing feeling and winning gave me that extra confidence boost I needed.

From submitting my application to winning, I actually changed flight schools and got paired up with my first male instructor. While it was amazing to have had two inspiring female instructors, they just weren’t the right fit for my learning needs. I was very proud of having female instructors, but in the end, I had to do what was right for my training. It was an important lesson for me to learn. It was difficult to change from my previous instructor because we got along great and I had no personal issues with her, but I felt stuck and having the same lesson over and over with little or no progress. 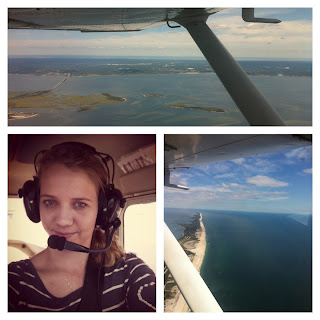 Within a few lessons with my new instructor I soloed! It was obviously a big day for me. I had struggled a lot up to that point. My previous instructor kept telling me I was close to soloing since the end of April, but schedules, weather, and my improvement wasn’t enough to get me to solo with her. I was beginning to doubt my ability. When I finally went for my progress check with another instructor, it went horribly wrong. I lost all my confidence and thinking about flying a plane solo made me feel sick to my stomach afterwards. I was ready to quit. I switched schools to give it one last try, and it was the best decision I ever made. I gained my confidence back and on August 12th my instructor said the next landing would be a full stop and he would be getting out, I wasn’t nervous at all! I knew I could do it because my last five landings were the best I’d ever done. My problem: my seat was too low; we raised the seat that lesson and it all clicked. I heard people saying that would may be the case, but I just didn’t believe it. I wasn’t expecting to solo and I think that made it so much better. It was a day I was beginning to think would never come. 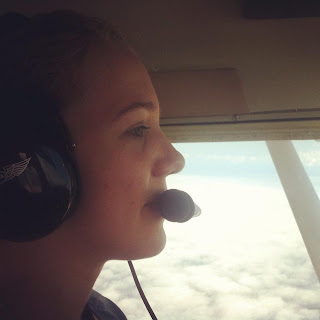 I love going up solo now, something that I thought I would avoid at the start of my training. I thought I would do my time required to get my license and then most likely always have another person with me in the plane. My mom would prefer I always have another pilot with me, but that’s not going to happen (sorry, Mom!). I now look at soloing as almost relaxing. I get my ultimate alone time. I know going into solo cross countries and check ride prep that solo time will be less relaxing and more work, but I think I’ll always enjoy it.

I went straight into cross country planning after my solo. I’m very lucky to have my boyfriend doing my ground school, so we stayed up later than I should have planning my first cross country to Poughkeepsie therefore I could just focus on the flying part of the cross country the next day. It was great to get out of the pattern; I have felt stuck in it for MONTHS! 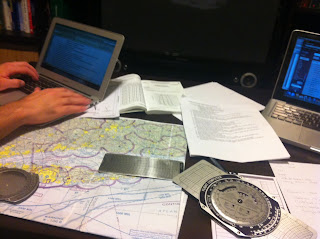 My CFI and I also accomplished my dual long cross country which was great because most of the first leg was flying along the northern coast of Long Island. It’s amazing how different the landscape looks further east. There are fields and lots of green, compared to the congestion I’m use to seeing. There was a few clouds below us, starting to form a layer. I got the chance to fly above the clouds, which felt like I was much higher than the 3500ft actual altitude I was. It also gave my instructor to explain to me if I was on my own what I should do. It was still VFR on either side, so it might have been better to fly across the Long Island Sound and follow the coast of Connecticut instead. We were in luck when the clouds parted and by our first stop, KGON, it was clear skies by the airport. The next two legs did involve dodging some towering cumulus clouds in the way of my planned flight path. After landing, while waiting for my train home I got a call from my boyfriend asking if I was on the ground at KFRG. I said yes and was a bit confused. Apparently, at Newark, there was a torrential downpour that cancelled his flights. I never got rain on, even on the way home! It’s funny how different the weather can be in such a close proximity, and a reminder to double check the weather at your destinations, in case you run into something like that!

I felt like I was breezing through training now. I worked on more complex landings/take offs on days when the weather didn’t let us leave the pattern. I also used foggles for the first time on my first cross country and used them for almost an hour another lesson. I started feeling a bit weird at the end so had to take it off before the Hobbs got to one hour. I’m now working on building up my solo time, to hopefully take my first solo cross country after my next lesson! It keeps being delayed due to weather or the plane has a broken attitude indicator. I’ll be taking my written very shortly as well. Things are moving along quite quickly, who knows where I’ll be by the next blog entry!

We're looking forward to hearing from you about it, too, Caitlin. Congratulations on your solo and for taking charge of your training.