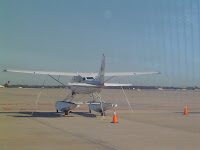 I consider myself lucky, having had the experience of flying helicopters in addition to airplanes. There are a lot of people that have only flown fixed wing aircraft. But there are so many different kinds of flying machines and reasons to fly them. One type of airplane that not many people are rated to fly are seaplanes. I am so jealous of anyone who can takeoff and land on water! I was in Ft Myers, FL, yesterday, and took a picture of this float plane.
Ok, so why would this capability be necessary?
Courtesy of wikipedia:
Uses and operation
Numerous modern civilian aircraft have a floatplane variant, usually for light duty transportation to lakes and other remote areas. Most of these are offered as third-party modifications under a supplemental type certificate (STC), although there are several aircraft manufacturers that build floatplanes from scratch, and a few that continue to build flying boats.
Many older flying boats remain in service for fire-fighting duty, and Chalk's Ocean Airways operated a fleet of Grumman Mallards in passenger service until service was suspended after a crash on December 19, 2005, which was linked to maintenance, not to design of the aircraft. Purely water-based seaplanes have largely been supplanted by amphibious aircraft.

Seaplanes can only take off and land on water with little or no wave action and, like other aircraft, have trouble in extreme weather. The size of waves a given design can withstand depends on, among other factors, the aircraft's size, hull or float design, and its weight, all making for a much more unstable aircraft, limiting actual operational days. Flying boats can typically handle rougher water and are generally more stable than floatplanes while on the water.
Rescue organizations, such as coast guards, are among the largest modern operators of seaplanes due to their efficiency and their ability to both spot and rescue survivors. Land-based airplanes cannot rescue survivors, and many helicopters are limited in their capacity to carry survivors and in their fuel efficiency compared to fixed-wing aircraft. (Helicopters may also be fitted with floats to facilitate their usage on water, though such craft are not referred to as "seaplanes".) These are even more limited in range.
Water aircraft are also often used in remote areas such as the Alaskan and Canadian outback, especially in areas with a large number of lakes convenient for takeoff and landing. They may operate on a charter basis, provide scheduled service, or be operated by residents of the area for private, personal use.
Greece uses seaplanes to connect its many islands to the mainland. In the Western Hemisphere, there are numerous seaplane operators in the Caribbean Sea that offer service within or between island groups.
In August 2007, Scottish based commercial operator Loch Lomond Seaplanes launched the only European city based seaplane service. They offer a daily service from Glasgow, Scotland's largest city, to the west coast town of Oban, as well as charters and excursions elsewhere.