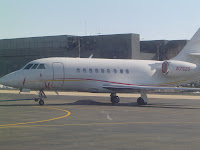 Look at all those red streamers hanging off this airplane. Is this some sort of decoration - to prove to others how fast you're going?

Let's hope not - those flags should be "Removed Before Flight." Those are mostly pitot tube covers, and are critical to safe operations. T

he cover keeps dirt, contamination, and insects from entering the pitot tube, which can result in erroneous instrument indications and damage to systems.

Pitot tubes are used on aircraft as speedometers. The actual tube on the aircraft is around 10 inches (25 centimeters) long with a 1/2 inch (1 centimeter) diameter. Several small holes are drilled around the outside of the tube and a center hole is drilled down the axis of the tube. The outside holes are connected to one side of a device called a pressure transducer. The center hole in the tube is kept separate from the outside holes and is connected to the other side of the transducer. The transducer measures the difference in pressure in the two groups of tubes by measuring the strain in a thin element using an electronic strain gauge. The pitot tube is mounted on the aircraft so that the center tube is always pointed 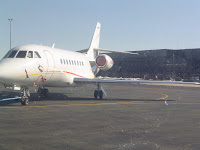 in the direction of travel and the outside holes are perpendicular to the center tube. (On some airplanes the pitot tube is put on a longer boom sticking out of the nose of the plane or the wing.) http://www.grc.nasa.gov/WWW/K-12/VirtualAero/BottleRocket/airplane/pitot.html If the pitot tubes are blocked, the speed of the aircraft cannot be accurately measured. This has resulted that more than just a few accidents.

There are also "engine plugs" to keep contamination from entering the engine. Snow can pile up in there - and birds can build nests overnight. Just another way to keep an expensive piece of machinery from needing maintenance!

Someone asked how to pronounce Pitot - it's pronounced /ˈpiːtoʊ/ tube. The Pitot tube was invented by Italian-born French engineer Henri Pitot in the early 1700s, and was modified to its modern form in the mid 1800s by French scientist Henry Darcy.