Mis-firing in your Wiring 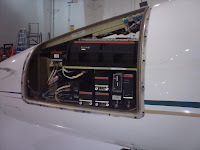 I had started this post looking for some statistic on how much wiring is in an airplane. All airplanes are different, of course, with some more complex than others. Electrical wiring is used for the obvious reasons, like lights, radios, etc., so I figured that if you included all of the other systems in the airplane, there would be miles and miles. I bring this up because we had to bring an airplane into maintenance, and the first thing the mechanics did was to open the 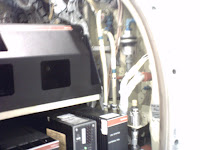 This is not viewable to the pilots during their preflight. If it was we'd see all of the wires and tubes leading into the pressurized vessel. This is on the other side of the flight deck, so obviously a lot of it has some level of importance to the pilots.

So I ask again, just how much wiring is in an airplane? Here is a much better picture:

In fact, according to this aviation maintenance magazine http://www.coopind.com/news_wiringmatters.htm :

Modern jets contain 100-200 miles of wiring running into every nook and cranny of the airplane. To borrow a biological metaphor, the wiring is akin to the body’s nervous system.

Mostly I just found articles with concerns about wiring. There were about ten articles in USAToday alone in 1999. http://www.usatoday.com/money/biztravel/wiring/w010.htm

Damaged wire insulation has led to fires and electrical equipment failures for years in military and commercial airplanes, according to Air Force, Navy and Federal Aviation Administration documents. U.S. and Canadian investigators are studying whether wiring malfunctions might have caused the crashes of TWA Flight 800 in 1996 and Swissair Flight 111 in 1998. Last September, NASA put a hold on space shuttle flights because damaged wiring was found throughout the agency's aircraft. An exposed wire caused a short circuit during the launch of the shuttle Columbia last summer. Similar flaws were later found elsewhere on Columbia and on the Endeavor and Discovery shuttles.

The problem is, you can't really see most of these wiring bundles http://www.usatoday.com/money/biztravel/wiring/w005.htm :

Wire-testing experts agree with Block that visual inspections have limitations. ''Almost all the wires in commercial aircraft are in bundles,'' says Chris Teal of Eclypse International, which sells wire-testing machines. ''Visual inspections can't see some radial cracks or each wire in a bundle. You have to check all the wires because often the problem is just one.''

Airline personnel used only flashlights to examine the wiring, and wire bundles were
left undisturbed. The inspectors -- some of whom examined their own airline's
planes -- were trained to look for ''signs of deterioration, cracked insulation,
discoloration, sparking, arc tracking, improper routing and dirt or lead buildup,'' Marcontell says. Wire-testing experts agree with Block that visual inspections have limitations. ''Almost all the wires in commercial aircraft are in bundles,'' says Chris Teal of Eclypse International, which sells wire-testing machines. ''Visual inspections can't see some radial cracks or each wire in a bundle. You have to check all the wires because often the problem is just one.''

I don't mean to scare anyone with this information. As we all know, flying is inherently dangerous and we have to take it seriously. It's good to know these things are being researched and improved on.