Someone sent me this amazing picture showing the vortices from a large aircraft: 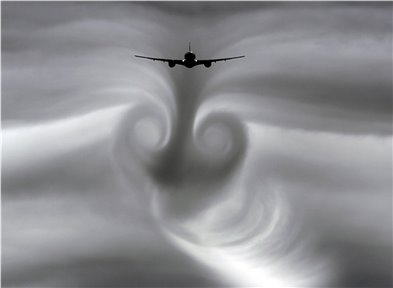 Although amazing just to look at, there's an explanation behind it that pilots need to be aware of...

An aircraft, like a ship, will leave a wake behind it. The lift on the wing is because of the difference between the higher-pressure acting on the wing's bottom surface and the lower pressure on its top surface. This difference in pressure causes the airflow near the wing tips to curl around the tips and move from the higher-pressure area below the wing to the lower pressure above the wing. The aircraft's wake is in the form of these two counter-rotating swirling rolls of air—the wake vortices—that trail from the wings of the aircraft. The wake vortex pair may last for several minutes and stretch for many kilometers behind the aircraft. The strength of the vortices depends on the aircrafts' weight, the air density, the flying speed, and the wingspan.

Vortices last longer in calm air, and atmospheric turbulence hastens their decay. Decay is the dying out of eddies. All aircraft produce wake vortices—much like two small horizontal tornadoes trailing behind the wing tips. The larger and heavier the plane is, the stronger the wake. That means small aircraft that follow larger ones can encounter turbulence if they are not kept far enough apart. The turbulence can be severe enough to cause a plane to crash.

Wake vortices are normally invisible, and pilots have no warning that they are flying into them. For this reason, the International Civil Aviation Organization has strict rules about the permitted spacing between aircraft, based on their sizes. In instrument flying conditions, aircraft may follow no closer than 3 nautical miles (5.56 km), and a small aircraft must follow at least 6 nautical miles (11.12 km) behind a heavy jet. However, the Autonomous Flight Formation (AFF) that NASA is developing could allow commercial planes the ability to use the vortices of other planes to save fuel, and fly safely.
From http://nasaexplores.nasa.gov/show_58_student_st.php?id=02122685840

Does it seem less awesome, now that you know why?