It's been a very long day... I was awakened at 0500L (That's 1000Z in aviation speak: we use "Z" time to represent GMT or Greenwich Mean Time or UTC, Universal Time *something or other*--Oh, you know what, let's let the folks at NASA define it. http://www.lerc.nasa.gov/WWW/MAEL/ag/zulu.htm

The world is divided into basically 24 time zones. For easy reference in communications, a letter of the alphabet has been assigned to each time zone. The "clock" at Greenwich, England is used as the standard clock for international reference of time in communications, military, aviation, maritime and other activities that cross time zones. The letter designator for this clock is Z.

Times written in military time (24 hour format) are four digits, such as, 1830Z (6:30 pm) with the Zulu suffix. Note that the phonetic alphabet is used for the letter Z (Zulu). This time is usually referred to as Zulu Time because of the letter assigned to this time zone. Its official name is Coordinated Universal Time or UTC. This time zone had previously been called Greenwich Mean Time (GMT) but was replaced with UTC in 1972 as the official world time standard changed. While GMT is based on Earth's rotation and celestial measurements, UTC is a based on cesium-beam atomic clocks. The two clocks are rarely more than a second apart as leap seconds are applied to UTC.

Sometimes it's better just to ask a rocket scientist.

Anyway, we departed my Cleveland, Ohio, home airport and went to Kentucky to take some folks to a resort town in the Florida Keys! 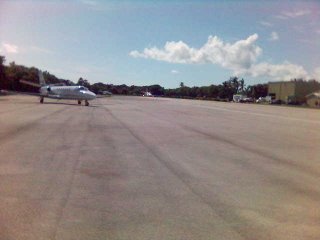 This was a very small airport--they don't even offer any fuel services. So you have to make sure you have enough fuel when you land to be able to get to another airport with either a fuel pump or fuel truck. We had to stop in Miami, Florida, for fuel so we could continue on to Jacksonville, also in Florida. We spend the night here and its another early wakeup to fly some more!