It had to happen. I am sick. The good news is that work didn't need me today anyway. The bad news is that since I thought I would have to work, I made no plans for a turkey dinner. Boston Market to the rescue!

So, let's talk about pilots and sickness...

Pilots need to have a current medical to fly. Every so often, they get a full examination by an Aviation Medical Examiner, which is usually good for six months (as a Pilot in command, Captain) or sometimes a year (second in command, First Officer).

According to the FAA:
What class of medical certificate must I hold and how long is it valid?

Additionally, pilots need to evaluate themselves on a daily basis to determine whether they are fit to fly. There is no question if the pilot is taking a medicine that makes them drowsy or has other side effects. If the pilot has a simple cold, they can take some over the counter medications to reduce the symptoms. HOWEVER, it is always up to the pilot to decide whether they can perform as needed. This is especially apparent if the pilot is just plain tired. It causes a decrease in decision making ability and reaction time--not good traits in a pilot...

Says the FAA:
Am I prohibited from exercising the privileges of my pilot certificate during medical deficiency?

Yes. You are prohibited from acting as pilot-in-command or as a required pilot flight crewmember during any medical deficiency that would be disqualifying or may interfere with the safe operation of an aircraft.

This is a really broad answer, huh? Therein lies the problem. Most pilots want to do their job and do it well, so they don't want to "wimp out" because of a runny nose. Pilots ask themselves, "Am I really tired or do I just need another cup of coffee?" The question pilots need to ask themselves is, "Am I capable of performing at my best today?" That's what our passengers expect and deserve. Of course, those we're working for might not appreciate our taking the time to recuperate because it can really mess up their schedules. Since bad things rarely happen, it's easy for all of us to forget how horrible things can get if something goes wrong. Pilots never want an accident to be caused by "pilot error."

(a) Operations that require a medical certificate. Except as provided for in paragraph (b) of this section, a person who holds a current medical certificate issued under part 67 of this chapter shall not act as pilot in command, or in any other capacity as a required pilot flight crewmember, while that person:

(1) Knows or has reason to know of any medical condition that would make the person unable to meet the requirements for the medical certificate necessary for the pilot operation; or

(2) Is taking medication or receiving other treatment for a medical condition that results in the person being unable to meet the requirements for the medical certificate necessary for the pilot operation.

A simple problem such as a cold, a broken arm, or an abscessed tooth may require nothing more than the appropriate treatment and a little time before you can safely return to the skies. A more complicated problem or the development or change of a chronic illness may necessitate consultation with an AME or the FAA before resuming flying. New medical conditions do not need to be reported to the FAA until you wish to return to flying.

There are some conditions that mean a person is unable to get their medical:
What medical conditions does the FAA consider disqualifying?

The following conditions are listed in the regulations as disqualifying medical conditions; however, in many cases when the condition is adequately controlled, the FAA will issue medical certification contingent on periodic reports.


Angina pectoris
Bipolar disease
Cardiac valve replacement
Coronary heart disease that has been treated or, if untreated, that has been symptomatic or clinically significant
Diabetes mellitus requiring hypoglycemic medications
Disturbance of consciousness without satisfactory explanation of cause
Epilepsy
Heart replacement
Myocardial infarction
Permanent cardiac pacemaker
Personality disorder that is severe enough to have repeatedly manifested itself by overt acts
Psychosis
Substance abuse
Substance dependence
Transient loss of control of nervous system function(s) without satisfactory explanation of cause.

Other conditions not specifically listed in the regulations are also disqualifying.

Have a great holiday weekend! 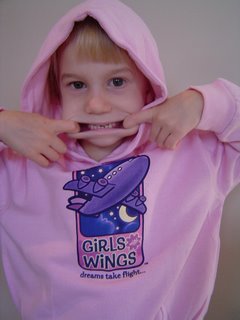 My niece, Delaney, *kind of* protesting her constant modeling of Girls With Wings apparel!