What an amazing year it has been for me. One year ago this month, I attending the Continental Luscombe Association’s annual fly-in at 022 in Columbia, CA. My good friend, Al, the same friend that introduced me to flying 35 years ago suggested that I join him there. I was recovering from fatigue due to a thyroid problem and I figured “why not?” I had enjoyed flying decades ago and thought that a weekend hanging out with pilots and perhaps having the opportunity to go up in a Luscombe again would be fun. Little did I know that a year later I would be well on my way to obtaining my Private Pilot’s License.

I did indeed go for a flight, thanks to the owner/pilot of a beautiful polished Luscombe. I was hooked again! I lined up another flight or two for the following day. Unfortunately, the wind kicked up that next morning and everyone took off for home earlier than expected. A couple of days later, I emailed Randy, one of the pilots I met at the fly-in and arranged to go flying in his Piper Cub. It was a great, scenic tour of San Francisco bay, complete with a stop for lunch at an airport café and low flying over the Golden Gate Bridge. I had such a great time that when I got home I just had to figure out how to go flying again. I thought of a friend of my son’s that had been interested in flying. I looked him up and found that he was now a pilot, flying out of Santa Paula (SZP) airport. Michael was kind enough to take me flying in his Taylorcraft. I had a great time and I loved everything about SZP – the location, the people, the airplanes. I followed that up with a weekend at the Piper Cub fly-in in Lompoc (LPC). I was in heaven - a few days of meeting super nice people and multiple flights. Randy and his friends even brought their Cubs to SZP for a day of flying with my family. 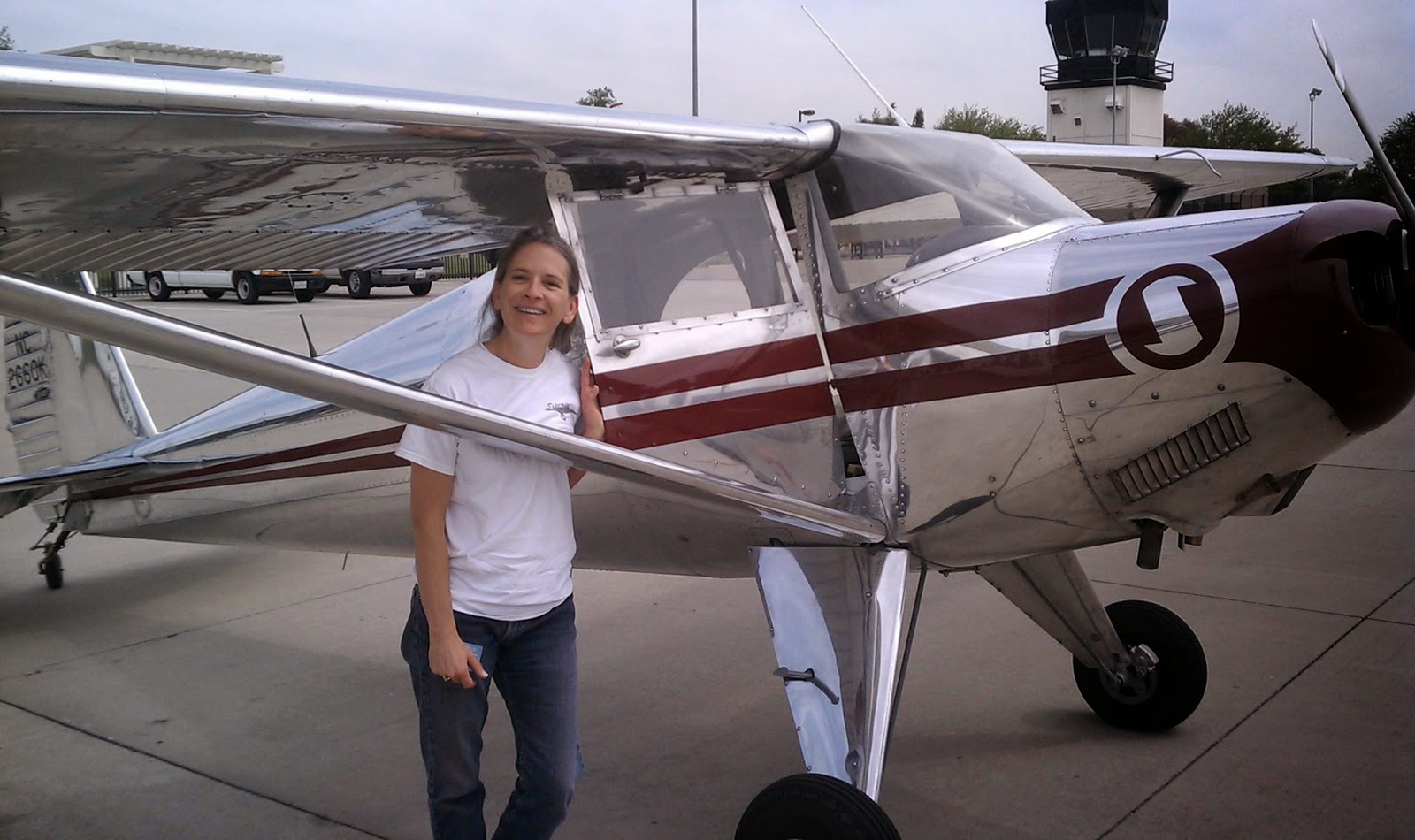 Within a couple of months I found myself at CP Aviation at SZP inquiring about flight lessons. In September I had my first lesson in their Cessna 150. I started out with lessons once a week, which grew to twice a week in January. The aviation community has been so kind to me. Girls with Wings has offered me this scholarship which has allowed me to continue my twice weekly lessons. The Ventura County 99’s have welcomed me into their fold, sharing their knowledge –Mignon and Mary Beth have offered to help me study for my checkride. My instructors, Mark & Judy, have been so supportive through the ups and downs of my flight training. Randy took me flying again and gave me my first lessons landing a taildragger in the grass at Frazer Lake Airpark (1C9). Chuck took me flying in San Diego and the desert east of there. Wilma took me along on a fly-out to Death Valley. Zach let me fly with him to deliver Chuck’s Cub from SZP to San Diego and he was kind enough to be my PIC to this year’s annual Luscombe fly-in in my very own polished Luscombe. Yes, my very own airplane! Al flew my plane with me from Enumclaw, WA (WA77) to its new home at SZP and Sammy took me flying in her locally. I still have to complete my training, pass my checkride and get my tailwheel endorsement – but I’m well on my way, thanks to the help and encouragement of awesome, supportive aviation community. What an amazing year it has been.