This is Deborah's essay from her application. As an awardee of this scholarship, she has agreed to send us updates on her flight training, which will be posted here when they are received. 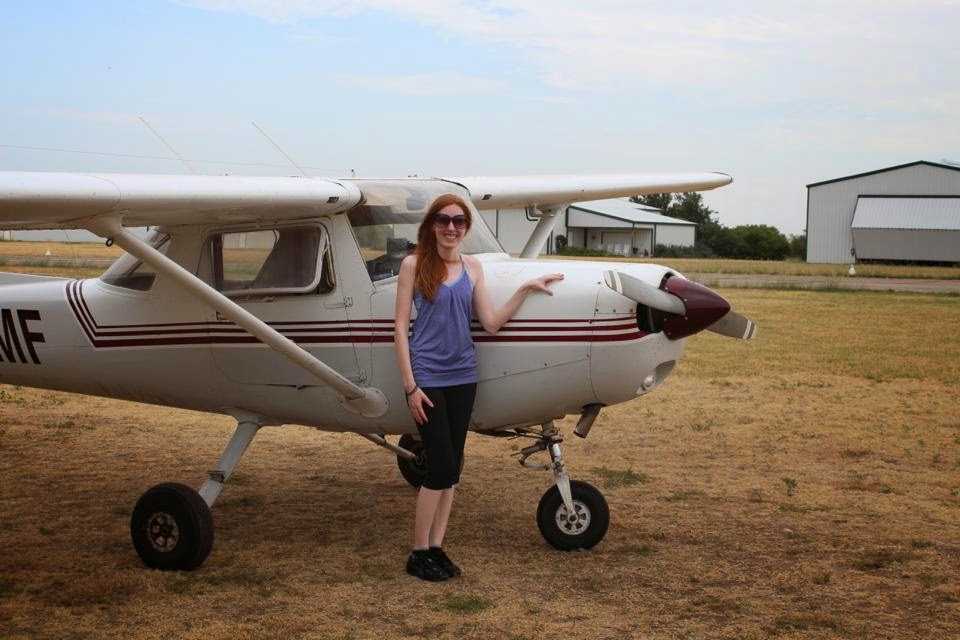 As the daughter of an enlisted Army father, I moved 8 times by the age of 15. This experience offered me greater perspective and some difficulty in learning to make new friends every time I moved. But the most important part of my childhood experience was growing up on air force bases. From a young age, I was surrounded, amazed, and inspired by aviation. I have always known I wanted to be a pilot, although it has been a long road to gain the confidence and means to make this dream come true.

I am the first person in my family to attend and graduate from a university. Working my way through college was a true lesson in priorities: I had to balance 40 hours of work, two jobs at times, a full school schedule, and a lot of homework. Even during this time, I pursued my passion for aviation in any way that I could afford. Although many of the members of the University of Arizona Flying Club were men with flight experience, I joined the Club and worked my way into the position of Vice President. My time is the University of Arizona Flying Club was a valuable learning experience and precursor to the gender dynamics I would later face in aviation.

During this time, I worked two jobs to pay my tuition. However, I soon learned that the Challenger Learning Center of the Southwest was looking for a new Space Exploration Educator. Up until this time, my interest in aviation and space were simply that, interests. I spent my own free time learning and exploring these fields of interest, but I had no formal experience in them. Still, this was a dream job. I studied hard and I earned the job. Through the next two years, I spent any spare time outside of school learning more about aviation and space exploration. I was able to share me love of aviation, science, math, and technology with middle school students. Often, I worked with children from schools that did not have strong science programs. I consider it a true blessing that I was able to share my excitement about aviation and learning with young children who had never before considered aviation as a real opportunity. So many children had never met scientists, astronauts, or pilots and certainly did not believe they could ever attain such careers. My favorite question for these children was “Why not?” For instance, why not finish school? Why not learn to fly? Why not follow your dreams? Eventually, that “why not?” question started to look me right in the face.

One of the pivotal moments that inspired me to finally follow my own dreams was during a two-week girls only summer camp designed to inspire girls to pursue their interests in math and science. I had the honor of co-writing the curriculum and co-hosting this girls-only camp. Inspiring girls to support one another to learn about male dominated fields inspired me. Following the camp, I was chosen to speak about the camp at the Space Exploration Educators’ Conference in Houston to inspire other educators to host girls’ only camps to peak girls’ interest.

I became a flight attendant to become more exposed to aviation and have used my current profession as an opportunity to meet female pilots and learn from their experiences. Although I believe this has been a positive experience, being a regional flight attendant for the last two and a half years, with the minimal pay and lack of seniority, has presented complications in pursuing my goal to become a private pilot. I gladly made many sacrifices to pay for my private pilot’s license. I chose to relocate from Detroit to Dallas-Fort Worth to increase the possibility of flight time. I also switched to a smaller, less popular airplane to increase my seniority in base to allow me to work more hours and thus spend more money on flying. As well, I have had up to ten roommates at one time to keep my living costs low. As hard as it has been, it has been completely worth it. I am inspired every day to continue chipping at my ratings to achieve my ultimate goal of being an airline pilot.

Even though I am very focused on my own goals, motivating young women is still paramount to me. In my current profession as a flight attendant, I urge the children on my planes to ask questions about aviation and share their excitement of the wonder of flight. My aspiration of being a strong, passionate role model in the aviation field became apparent to me the more I surrounded myself with women that are zealous about their aviation careers. I was lucky to be taught by a female flight instructor for my private pilot’s license and completed my check ride with a female examiner. I have also been able to volunteer with the Dallas 99s and meet incredible women through that organization. These encounters only increase my own passion.

I would be honored to become more involved with Girls with Wings. With the support of this wonderful organization, I would be able to gain more flight time and thus come closer to earning my instrument rating. It would allow me to complete 11 more hours in the Cessna 152 I rent and bring me a huge step closer to my instrument rating and ultimate goal of being an airline pilot. I also believe that accomplishing this goal would give me an even greater ability to become a role model for young girls. I am so grateful for the opportunity to apply for this scholarship. Thank you for your consideration.