These are the happy beginnings we live for!


From Alaina, a Girls With Wings Spring 2012 Scholarship winner:

"Hello everyone, I'm back with exciting news! Sunday August 12th, I passed my check ride for my private pilot license! I took my exam with Martha Lunken, the editor of a column in the Flying magazine. In our part of town, she is almost a flying legend; Martha is one of those people that it seems everyone in the Ohio piloting community has heard about. 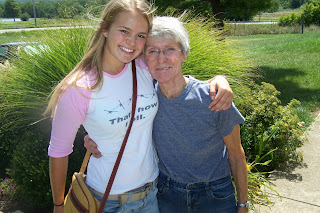 Overall I would say my exam went very smoothly. I was a little nervous because I was not behind the controls of my Aeronca Champ, but over the past few months the little 150 and I had become well-acquainted enough that I could perform the maneuvers without a problem. Luckily for me, the winds were no greater than 6 knots and were blowing almost right down the runway at Red Stewart Airfield. However, I would say the greatest advantage I had was having Martha as a flight examiner; even though she had previously been part of the Federal Aviation Administration (more commonly referred to as the FAA) I was not intimidated in the least bit--except the fact that I was flying with Martha Lunken. THAT was pretty cool. Having the ground portion of the examination was more like a conversation about pertinent aviation information rather than a grilling for obscure facts and numbers. As for the flying portion, our headsets weren't compatible, but we still got in the air anyways. On our emergency landing check, we probably got within thirty feet of the ground before I could add power again (but no worries, we would have made it safely into the field!).

Overall, it was a very neat experience. I am also relieved to have wrapped up my training before school started--whew! I wouldn't have been able to do it without Girls With Wings and the support from my friends and family. Thank you so much everyone for making my dreams come true!


The Girls With Wings Scholarship Program provides funds for flight training to selected individuals with a willingness to be superlative GWW role models. Winners show potential to continue her interaction with the GWW organization, via the website and events, so she can assist GWW in encouraging more young girls to have an interest in aviation. Part of the obligation for being awarded the scholarship is to submit at least one picture and an associated journal entry once a month for three months to the Girls With Wings blog to share with others her training, as well as email a final essay summarizing how the scholarship helped her, what she learned and her intent to continue her work as a role model and volunteer for the Girls With Wings, Inc., organization.