We are so excited to present to you the application essays from the two Girls With Wings Summer Scholarship Winners!

The Girls With Wings Scholarship Program provides funds for flight training to selected individuals with a willingness to be superlative GWW role models. Winners show potential to continue her interaction with the GWW organization, via the website and events, so she can assist GWW in encouraging more young girls to have an interest in aviation. Part of the obligation for being awarded the scholarship is to submit at least one picture and an associated journal entry once a month for three months to the Girls With Wings blog to share with others her training, as well as email a final essay summarizing how the scholarship helped her, what she learned and her intent to continue her work as a role model and volunteer for the Girls With Wings, Inc., organization.

Meagan is the recipient of our $1000 Private Pilot Flight Training Scholarship.

My name is Meagan Gearin and I'm a student pilot at Pinnacle Aviation Academy, in Carlsbad, Ca. I graduated with a Bachelor's Degree, in Political Science, in August, 2011. After I graduated college, I immediately enrolled in a Private Pilot ground school class and took my first discovery flight on September 21, 2011 (which is reflected in the copy of my logbook). After my discovery flight, I immediately fell in love with flying and have been committed to obtaining my Private Pilot Certificate ever since. 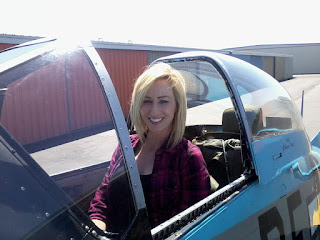 I was initially inspired to get involved in aviation when I met a female First Officer for American Airlines. I never knew that becoming a pilot was a possibility for a woman until I met her in 2011. That is precisely why I want to become involved in the Girls With Wings organization and why I think it's so important for young girls to have female pilot role models. I think exposing girls to aviation, at a young age, will inform them that becoming a pilot is possible for a girl/teenager/woman. I didn't know becoming a pilot was possible until I was 27 years old because I didn't have a female pilot role model. I grew up in a non-aviation environment; therefore, I wasn't exposed to aviation as a young girl.

I would love to inspire young girls to pursue a career in aviation. I think planting the seed of possibility is the first step in inspiring someone to pursue a goal or dream. I wish someone would have exposed me to aviation at a young age or would've brought the idea of flying an airplane to my attention. If someone had brought flying to my attention when I was a little girl, then I'm sure I would have become a pilot long ago.

My plan for becoming involved in the Girls With Wings organization is to first create a blog on the GWW website, in order to inform the reader of what it's like to be a female pilot. I will share my lessons, how I feel, what I'm learning, and most importantly, spread the joy of flying and provide insight into the world of being a female pilot in command of an aircraft. Along with creating a blog, I will attend girls' club meetings at an elementary school. My best friend is a 5th grade teacher in Oceanside, Ca. She was the 2011 Teacher of the Year for Oceanside School District and was nominated for Teacher of the Year for San Diego County. Every school year she creates a Girls' Empowerment Club, which I think is the perfect outlet for exposing the Girls With Wings organization. My plan is to obtain the necessary resources, tools, and information, from the Girls With Wings organization, and relay that information to her 5th grade Girls' Empowerment Club. I will inform them about the Dreams Take Flight scholarship and, hopefully, inspire them to pursue a career in aviation.

I'm relatively new to the entire world of aviation, so I'm working on networking and becoming more involved. I've recently become an associate member of the Ninety-Nines and a member of the Girls With Wings organization.

I'm greatly in need of financial aid in pursuing my Private Pilot Certificate. I was working 60 hours a week, in order to pay for my lessons, up until the end of June, when I lost my second job. I'll be working 2 jobs again, beginning July 11th (I just a got hired as a flight dispatcher at Pinnacle Aviation Academy), and working 3 jobs beginning July 14th (I'll be working at the Del Mar race track as a server for the 6 week racing season). I'm working as hard as I can to make my dream of flying come true.

I've provided a copy of my logbook and will be happy to provide more information if needed. As of today (6/30/12), I have logged a total of 65 hours of flight time and have flown all my required solo cross country and night flights. I still need to take the written exam, prepare for my end of course, do "mock" check rides, and take the actual check ride for my Private Pilot Certificate. These items combined will well exceed the $1,000 scholarship; however, having the peace of mind in knowing that I won't have to worry about the money, will allow me to completely focus on studying and preparing for my check ride. I'm 100% financially independent and money is always a concern for me, especially since my student loans for my Bachelor's Degree are due, as well. I'm progressing as quickly as I can and will continue to move forward until I've reached my overall goal of becoming a commercial or corporate pilot.

Please note: Meagan successfully passed her checkride on July 21st and became a Private Pilot prior to the announcement of the award. Since expenses were still incurred after the close of the scholarship application window in pursuit of this rating, we are allowing her to apply the funds to training already received (up to $1000). She will still be submitting blog entries on her flight training experiences.