Finding fans of Penelope Pilot - and you can help!

Any of you that have had any interaction with Girls With Wings at Oshkosh or an Aviation Inspiration Day has met my dad, Norm. The guy has gone completely crazy about Girls With Wings. And I mean crazy because the guy does a whole heck of a lot of work around this nonprofit organization without any compensation at all.

Well, not completely "at all." He'll tell you that he gets his reward interacting with people instead. Recently we were in a Outfitter's store near the Boundary Waters in Minnesota and he began talking up the Penelope Pilot book. Believe it or not, they bought it. Literally, I mean. They're placing an order for a few copies to try it out. An outfitter's store. That's where they sell gear for hiking, canoeing, camping. Not much in the way of aviation stuff.

For example, he wrote this quick summary of a recent exchange:

I arrived at a friend's house on my motorcycle, not realizing that a package that I had crammed into my jacket pocket had fallen out along the way.  I remembered that in one of the neighborhoods I had seen a woman in the street picking up something after I went by. I went back and stopped at the house and, yes, by golly, she said had seen the bag lying in the street and went out to dispose of it thinking it was trash.  Since it was just filled with miscellaneous hardware, she put it in her garbage.  She was more than a little surprised that I came back for it!


After thanking the lady for her helpfulness, I prepared to start my bike. But then I noticed that there were little girls playing in the drive.  This is always my open invitation to start talking about Girls With Wings and Penelope Pilot....  When I mentioned the book "Penelope Pilot and Her First Day as Captain," two of the little girls said "Oh, we've read that book!' with huge smiles on their faces!


Lo and behold, they had checked the book out of the Rochester, MN, public library the previous week.  Both the girls and the mother were ecstatic in their description of reading the book together and passing it around to other girls in the neighborhood.  I then took the opportunity to describe the GWW website and the (at that time) upcoming Aviation Inspiration Day at Fleming Field in South Saint Paul MN.  The woman told me that they would look at the website and come to the event.

See what I mean? What an amazing coincidence to run into these girls in a town with a population of over 106,000. After all, this is a first time author's (me) children's book, self published, dealing with a book about an airline pilot and how she prepares for a flight. And yes, it is a book for both boys and girls - but just happens to feature a female pilot. And though the book is in several different libraries, at these two at least, the librarians at his and mine assure us that it is unbelievably popular (based on the number of times it has been checked out) relative to the very many children's picture books in their inventory.

So great is the appeal of the book that we have actually acquired a few new fans - a couple of which you may be fans of yourself:   Ariel Tweto and Sarah Fraher, the two female pilots of Discovery Channel's Flying Wild Alaska! A recent press release announces the donation of FIFTY Penelope Pilot and her First Day as Captain children's book by Jones Dykstra and Associates, a digital forensics, cybercrime investigation, e-discovery, and expert witness company. The books will be delivered to Alaska's remote villages later this fall. ”I think it’s important for women to fly,” Tweto said. “If what Sarah and I are doing can provide a little glimmer of hope to the people of these villages, that’s just really inspiring for me personally.”

P.s. the young girl with Sarah in the above picture has been mentioned NUMEROUS times in this blog. 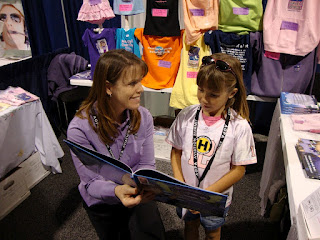 This has inspired us to do a little book drop of our own. We always get such rave reviews for the book but far too many people say, "but I have no one to buy it for." So Very Important Pilots, the operator of the Girls With Wings Pilot Shop, is going to contribute free shipping and handling for fans that would like to donate a copy of Penelope Pilot and her First Day as Captain to their local library. This way every kid has the chance to learn that Dreams take Flight! We'll even include a personalized acknowledgement of the generous individual's contribution inside the front cover (if desired). What do you think? I think there are people out there that care this much to let kids know that "Yes, Girls Can Fly!" Don't you agree?


Just go to the Pilot Shop to buy a Penelope Pilot book at $15.95 and enter the code Library at checkout for free media mail shipping. Put the donor's name in the "Bill to" and the Library's name in the "Ship to." Make sure you enter any special comments (please clearly specify donor and recipient if need be) in the appropriate box. You can do it! [Remember, profits from the sale of the book are donated to Girls With Wings, so GWW benefits twice.]


Of course tell your friends that they can do it too. Help spread the our goal to encourage more girls to have an interest in aviation. We thank you. The kids will thank you.