I believe I can wrap up this adventure with this last installment. Having never been a woman of few words, I know I'm dragging out this experience but it's been great for me to reinforce all that I've learned. So where was I....?

Oh, yeah, Oklahoma. After another very short night's sleep it was time to continue on to the Air Race Classic Terminus in Mobile, AL. I called the weather briefers again and received the news that the way was MOSTLY clear, except for a couple of isolated thunderstorms along our route and some low ceilings about 2/3 of the way to our destination. Rather than mess with dodging these clouds later and perhaps running late (we wanted to get to KBFM before The Racing Aces did to record their arrival), I filed an IFR flight plan and left for the airport so we could take off at 6am.

All in all, I'm sorry to say that it was a non-eventful flight. Wait. That's a good thing, right? Those cells showed up on the Garmin Aera right as scheduled and I requested a slight deviation from ATC to go around them (though I was suspiciously sure that the cells were purposely moving into our direction of travel). The low ceilings appeared just as predicted, but we were well above them and they didn't impact our flight at all. We passed them by in due time and it was clear and a million by the time we got to the Mobile area. All the way over there was a T-6 Texan following us on the frequency. And I do mean Texan. The pilot had quite a drawl! 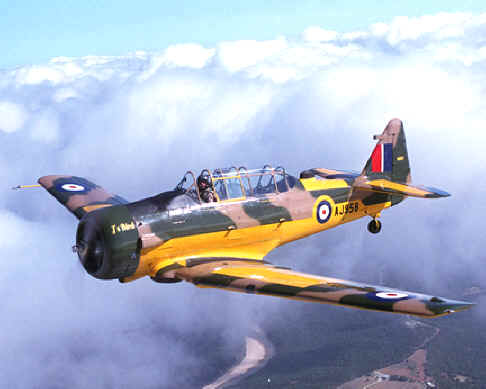 "The North American T-6 Texan was known as "the pilot maker" because of its important role in preparing pilots for combat. Derived from the 1935 North American NA-16 prototype, a cantilever low-wing monoplane, the Texan filled the need for a basic combat trainer during WW II and beyond." Since  I made it to KBFM first, we taxied off the runway and turned on the parallel taxiway just as we heard the T-6s request and approval for it from tower. Don't know why and don't care, but the Texan did a low pass blowing smoke down the runway. Love it.

Jasmine and I unloaded all of our gear and prepared for the arrival of the Racing Aces. Their Husky was the only taildragger to finish the race this year, as apparently the Maule that was also entered unfortunately had engine trouble along the way. Also awaiting their arrival was Katherine, the young lady from the Mobile, AL, Boys and Girls Club that was paired with them for the Race. The racers all had to turn in their keys and their GPS trackers and are not allowed to mess with their airplanes until given the OK from the judges. At this point the racers were on their own again, for socializing, touristing, eating, sleeping, shopping, etc.  I heard from quite a few people that the active Facebook page not seen before the 2011 Air Race helped facilitate a greater sense of camaraderie among the racers. There was no shortage of pal-ling around!

Though I'm not officially a part of the Race,  I did make Saturday's Extravaganza for the Racers and their partner girls at the USS Alabama Battleship and Aviation Museum. These were the girls I gave a presentation to back in March. It was wonderful to see the girls so excited about interacting with the Racers! Inger Anderson of the B&G Club and Terry Carbonell of the ARC did a wonderful job bringing everyone together. I can't help believing that many young lives have been impacted by the relationships developed between the women and girls and definitely plan to have a role again next year in giving the presentation at the Terminus stop in the Cincinnati, OH, area. I appreciate the support I received from the other Racers for Girls With Wings and hope to have an increased role in the future. Even though I have no idea what the future holds for me, I know the Air Race Classic has incredible events planned for the kids next year.

All in all, I am completely overjoyed to have been able to participate in the race with the Racing Aces, even if in a limited way and in several different capacities. It has been a crazy time for me since February when I left Ohio for the Women in Aviation conference and I have hardly been back since. I've been simultaneously keeping Girls With Wings going while working on my CFI and I know there are quite a few people that have been craving more of my attention. I am trying.

The planning for the Race took initially longer than it would for someone more familiar with this type of flying, but I am much more comfortable with it now (now to find some kind of income doing the same!). It will soon be time to put this all aside: I am returning the 182 to the Flight School tomorrow - after I give it a bath, of course, and will immediately be on my way to Houston to complete the CFI training and schedule the checkride. This absolutely must be completed before Oshkosh the last week in July or I will likely never get it done as new events and tasks will come rolling around in August. Do not be surprised if you don't hear from me until it's done. I will report my success [fingers crossed] here as soon as it's a reality!