In my last blog entry I talked about the cross country flying that I'm doing in conjunction with the Air Race Classic thanks to The Racing Aces, who have recently announced they have raised over $14,000 for Girls With Wings. Yeah, that's right.  I cannot thank The Racing Aces - Dianna Stanger and Victoria Holt, for their amazing generosity, as well as their sponsors: As I was mentioned previously, the Air Race Classic was delayed by a day because of weather. There was a low pressure system just stuck over Iowa. To the left is a schematic representation of flow around a low-pressure area in the Northern hemisphere. Wind is initially accelerated from areas of high pressure to areas of low pressure. This is due to density (or temperature and moisture) differences between two air masses. The pressure-gradient force is represented by blue arrows, the Coriolis acceleration (always perpendicular to the velocity) by red arrows.  A low pressure area is commonly associated with inclement weather, while high pressure area is associated with light winds and fair skies. Said low pressure system was right over IA, with the strongest storms to our north and west - where the first stops were. And it wasn't moving any time soon.

The decision to delay the race by a day led into a plan to have everyone relocate to Alliance, NE, to resume the race. Everyone was left to their own devices, as long as they got there by noon. KIOW to KAIA was over 500 miles and many of the racers decided to go either halfway, or divert way south around the weather system, or, as we did, wait until morning.  Jasmine and I met Dianna and Victoria at the airport and after they left (Jasmine is their PR person), we departed IFR. On an IFR flight plan. So what, you say?

What's so significant about my filing an IFR Flight Plan? (For IFR flights, flight plans are used by air traffic control to initiate tracking and routing services. For VFR flights, their only purpose is to provide needed information should search and rescue operations be required, or for use by air traffic control when flying in a "Special Flight Rules Area") I mean, I used to fly IFR all the time. However, I haven't flown IFR (other than an Instrument Proficiency Check) since I got furloughed a year and a half ago. And this time I was flying through the clouds, not facing a huge avionics panel as shown above, but a big blank space.

Since I'm training to be a Flight Instructor, I've been flying the whole route from the right seat so that when I return from this trip I'll be ready to wrap up that durn checkride. So I guess I didn't really think through having to lean over to see the instruments. Jasmine, I should mention, is not a pilot. That blue middle round gauge on the top row? That's the attitude indicator, or artificial horizon. Since we fly an airplane in relationship to the horizon (nose above the horizon = climb, wing below the horizon = turn), something had to be done for us to fly through the clouds. Eureka. You can see the difference between the two panels. On the X panel you can just barely see the standby attitude indicator on the upper left. It's the third one of three. Used for emergencies. So it took a lot of concentration for me to climb through the clouds - luckily ending up on top of the layers of white stuff.

May I add, it was fuh-reezing up there. The temperature drops on average 2 degrees Celsius for every thousand feet of altitude. My passenger gets a little queasy and the heat was messing with her stomach.

Once we got past the low pressure system, it cleared up wonderfully, so I didn't have to descend through the clouds to do an instrument approach - yay! We landed in Alliance, NE, and met a huge crowd of folks. You wouldn't have believed the crowd on the ground here. They were able to take advantage of all of the airplanes showing up at relatively the same time and doing their flybys (flying past the timing officials). The local Chamber of Commerce donated food and families were welcome to walk around and look at the airplanes and talk to the pilots. It was great to see the interaction. THIS is what it's all about.

After every one started taking off again, we departed for Rawlins, WY, what was scheduled to be the previous stop, but canceled. That was another two hour flight and my first in the mountains in a single engine airplane. I decided to fly high - but, yes, VFR. I flew about as high as I could without using supplemental oxygen - 10,500 feet. I have been in a jet at 30,000 plus feet and lost altitude in seconds because of mountain wave: The rising air of the lee wave, which allows gliders to climb to great heights, can also result in high altitude upset in jet aircraft trying to maintain level cruising flight in lee waves. Rising, descending or turbulent air in or above the lee waves can cause overspeed or stall. 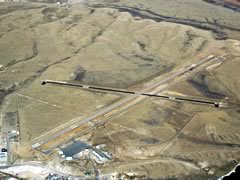 So it was a little bumpy, and the strong crosswind kept swishing the tail around. Woah... Woah.... Yes, I'm afraid of heights. [I say this knowing how completely ridiculous it sounds.] My grip on the controls slooooowly loosened as time went by without going kittywumpus (that's an official aviation term - look in the Pilot/Controller Glossary). We found Rawlins, and I remembered the lessons taught to me by a Captain I flew with into the Rockies for the first time. From Pilot Friend: A rule-of-thumb states that the airplane flies faster than indicated airspeed at altitudes above sea level by approximately 2-percent-per-thousand feet above sea level. This is a built-in compensator for reduced lift caused by the thin air at higher altitude airports.

I got slowed down early, down to traffic pattern altitude, turned final right on profile, and heard a warning over the radio to watch out for the crop dusters. Sure enough, as I was on base I told Jasmine to tell me if she saw that airplane short of the runway moved closer. Yup. I had hoped they'd be off before I came in, but I ended up also doing my first go-around in the mountains. I'm not sure the guy ever even looked in the direction of final to see if anyone was in the pattern. Grr.

Well, the hospitality was more than made up on the ramp. The marshaller was just as friendly as could be, and very happy to see anyone associated with the Air Race show up. He had cut a bunch of tiedowns for all the racer airplanes.... And the woman in the FBO gave us a couple of the hats that they had embroidered for the racers.... Oh, we felt so bad the race had passed them by! It unfortunately had another consequence. We had gone to Rawlins because we had hoped to do Girls With Wings promotion by offering to do the presentation. Even though only the race stop was canceled, the residents also must have assumed the presentation was also canceled.  I did get to spend some time chatting with Minetta Gardiner, the woman who arranged the wonderful start activities and her co-pilot, Charissa A. Dyer-Kendler, a flight instructor at Sporty's Flight Academy, who were one of two teams who decided to do the whole race as scheduled.

I was so disappointed that we weren't able to meet any local girls at the stop. It wasn't for lack of trying. My success in finding opportunities for doing presentations has mostly been through pre-formed Girl Scout troops or other groups - and when school's out, this can be a tough, sometimes impossible, job. It's not the first time I've been stood up. It usually helps to get preregistration - a commitment - but there just wasn't time to arrange for it with the time frame we had (we have no idea how many would have showed in Jamestown since we couldn't make it there because of weather). We promoted Aviation Inspiration Day for MONTHS to get such a large crowd. And even when a group says there will be x number of girls, I can almost guarantee that 10-20% just won't show. Even if they've paid the $5 in advance. I don't know why that is. What could come along that would be better than the GWW presentation? I know, right??

Like I said, not for lack of trying. I've been watching Jasmine do the PR thing for some time now and am learning from her efforts. For years I have hoped that someone would volunteer to do marketing for Girls With Wings - I'm a pilot, not a PR expert! - because it takes up a huge amount of time. You've got to email, call, email and call again to get any response out of some people. I've been for the most part a one woman show working with my nose so close to the grindstone that what publicity I've gotten has been through luck finding someone supportive of the Girls With Wings mission. I spent years working on building the organization before I started to get enough cache to have my press releases published, and even now only sporadically. I think offering money for scholarships got the ball rolling getting the word out about the goals, but Girls With Wings does a lot more than that! Dianna's PR guru, Jasmine, has shown me how much work can go into promotion. She's had an amazing amount of success getting the word out about the Racing Aces, and therefore the Air Race Classic. If you go to the Racing Aces site you can see the many hits.


Here's hoping that the donation from Racing Aces will let us take it to the next level and increase the ability of Girls With Wings to reach out more - and to be able to handle the increased attention. But please. Wait til I'm done with the CFI checkride, ok? And then Oshkosh. I'll definitely have more free time after Oshkosh. :)