In the last blog entry I talked about the middle portion of my Air Race Classic adventure. We had made it to Rawlins, WY, and needed to cross the country again, this time to the Terminus in Mobile, AL. Originally Jasmine and I needed to make the trip in one day - over 10 hours of flight time! However, because of the changes made in the race we had two days to make the trip.The Racing Aces recommended we stop halfway, at Tulsa, OK, to rest and refuel. I'm good with that.

I woke up early early to start calling 1-800-WX BRIEF.  This number enables pilots to talk to "Air Traffic Control Specialists assigned to Lockheed Martin Flight Services, certified by the National Weather Service (NWS) as Pilot Weather Briefers. Pilot Weather Briefers are authorized to translate and interpret available NWS products describing the enroute and destination weather. The leading contributing factor to general aviation accidents is weather. Pilot Weather Briefers are trained to help you avoid dangerous situations." There's a really great page from Flight Training magazine that includes all that Flight Service offers, but let me sum up: it is the best way (supposing you've done a little bit of research in advance) to get a good overview of the weather situation along your route of flight. Plus they can tell you all of the NOTAMs (discussed previously) and TFRs (Temporary Flight Restrictions) that violation of can put your license at risk. And it's a real person. Ask for clarification on that turbulence forecast, and they can tell you whether it's going to be a factor for you or not.

I wanted to get up and going as soon as the sun came up to take advantage of the lighter winds and smoother skies that are more common first thing in the morning but the FBO didn't actually open til 7am. I still got up before dawn. I'm much more of a morning person. As I was listening to the briefer tell me how it was clear it was at RWL, I was also looking out of my westerly facing window at the dark ominous storm clouds rolling in from that direction. They were currently caught up by the mountains on that side of the airport but I knew they were coming eventually. I got a hold of Jasmine and we departed the hotel for the airport as a light rain started falling.

I should have taken pictures of what I was looking at, but I was trying too hard to interpret the clouds around the airport. The current weather at the airport was still saying clear, but there were definitely clouds all around. I filed an IFR flight plan, but I feared that we'd have to climb too high to get seen on radar and as a result get caught in the bumps that usually exist in such cloud formations. No way I could have gotten on top of them. I looked to my right and my left but never did see another flight crew member to help me make a decision as I was used to. So on my own I determined we could fly to the east, under the clouds, and get out that way. Conveniently in my intended direction of travel. But I was never going to get anywhere unless I took off! C'mon, Lynda, make a decision already!

Sure enough, it was pretty clear after takeoff that we'd have NO problem getting out of there to the east. Not only that, it was a much smoother flight at the lower altitude than what we flew up higher on the way in! Interestingly enough, though, when I checked in on the Denver Center ATC frequency for radar advisories, the controller started asking me about the IFR Flight Plan I had filed. Panicked, I was thinking, oh, no, what did I forget? I didn't activate it, so why were they looking for me?? A CFI friend says that's just the conscientious controller keeping an eye out for folks flying out of the Rockies. Nice, but still raised my BP a bit!

And just like that, we were on our way to Tulsa, OK, at 7500 feet. It was so neat to see the rocky terrain change to farmland and go from grey to brown to green. We even flew right past one of the Air Race stops, Great Bend, KS. I really feel that on this leg a growing comfort level  in the airplane. My "cone of understanding" was growing, as I had more time and ability to look around and observe all that was going on, playing around with power settings and leaning the engine. Especially since I had a challenge on this leg. I wanted to take off from Rawlins with the least fuel load to be at the lightest weight for the best performance in the mountains, where climb performance can be an issue. But I also wanted to be able to make Tulsa nonstop.

The problem is that the fuel quantity indicators in airplanes are only required to read correctly at 2 different fuel levels: Full and empty. So even though the fuel was showing sufficient, I still had some hesitation about trusting them. I kept recalculating, trying to determine if I should preemptively land to get more fuel. It would be a bit wasteful if I didn't need to land, get gas and take back off again if I already had enough on board. Should I? Shouldn't I? I was trying to recalibrate my brain. Used to seeing a fuel flow in the hundreds of gallons (we actually use pounds of jet fuel usually) per hour in the jet, the C182 burns about 11 gallons per hour. With over 20 gallons remaining, I still had two hours easily. But, I was thinking, if you run out of gas in an airplane you just don't coast to the side of the road. And we pilots are ALWAYS hearing about "fuel starvation" accidents where a pilot ran out of gas and has to land in an emergency situation... 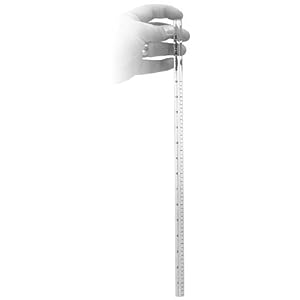 ...but it was no problem. Just to make sure, when I landed at Tulsa, I checked the tanks myself. Since the fuel gauges are so inaccurate, the best way to check the tanks is to use one of these. Stick it in the tank, hold your finger over the end, and the fuel level will be indicated on this gauge. Turns out I had TWICE the fuel load required by the Federal Aviation Regulations. I only needed to have a half hour of fuel (6 gallons) for this day flight and I had over twelve. However, in all honesty, did I feel real comfortable with that? Not so much. Especially since I wasn't very familiar with that airplane and with how accurate the gauges were. I'm now beginning to understand why my friends who are pilots are SO conservative on their fuel burn rates.

Frankly, even though at this point it was still early afternoon, I am done for the day. A couple of pre-4 am wakeups followed by hours and hours sitting in a gently rocking airplane under the hot sun was working me over.  Time to plan for tomorrow's KTUL to KBFM flight...