This November I left the weather in Northeast Ohio to almost the exact same weather in Southern California. No kidding, a solid week of sun and mid-60's in Cleveland, in November and I missed it? Yes, but what I got to experience in SoCal was SO much better!

I have to admit, however, I was totally dreading this trip on the airlines. I have not flown commercially since my furlough started in January, and given all of the bad press the TSA (short for Transportation Security Administration) has been receiving, I expected quite the molestation ritual. Surprisingly, at my airport it was like nothing had changed - when I flew back home out of LA, either.

I first visited a long time friend, Barbara, proprietor of Plane Mercantile, a wonderful eclectic store of antiques and nostalgic aviation items. We met at the first appearance of the Girls With Wings retail line at the Ninety-Nines International Conference in DC in 2006 when Barb walked up to me after a long day of driving from Cleveland and setting up tables to ask if I wanted to share dinner. Actually, I believe she called it "beer." She was a great source of information then and still is - about many things, but mostly about aviation. She has an encyclopedic memory of the growth of aviation over the last century, with several works including "Pancho: The Biography of Florence Lowe Barnes" an excellent and complete of the life and times of the famous society aviatrix and owner of the Happy Bottom Riding Club.

Barbara and I meet yearly at many aviation events, like Women in Aviation's annual conference. This year she also had a booth at EAA's AirVenture, or (Spl)Oshkosh. And, of course, we both had a presence at AOPA's Aviation Summit. More about that later. First, I wanted to also share with you that Barbara and her family have a love of all things aeronautical. Even her sons are pilots. Her husband, Philip, has had a career as an engineer and test pilot that a wall of citations and awards clearly demonstrate. So I was more than willing to go have a $100 hamburger (see previous blog entry) in their Beechcraft Model 18, or "Twin Beech", a 6-11 seat, twin-engine, low-wing, conventional-gear aircraft.

We flew to Mojave Airport, where we just happened to actually see a very famous aviation engineer with some serious mutton chops, not so coincidentally, in a restaurant named Voyager. Besides being the home of Mojave Air and Space Port, a world renowned flight research center hosting the latest and most advanced aeronautical designs, it is also a boneyard. Mojave's dry desert climate and acres of available open space makes this an ideal location for aircraft storage. Numerous large Boeing, McDonnell Douglas, Lockheed, and Airbus aircraft owned by major airlines are stored on site. Some aircraft reach the end of their useful lifetime and are scrapped at Mojave. Others are refurbished and returned to active service.

When we got back from this trip, Philip, also a A&P (airframe and powerplant mechanic) with IA (Inspection Authorization), offered to conduct a little ground school using their Cessna 150. So he removed the cowlings and proceed to point out all the parts of the engine, to which I was known to utter a few "Ooooh's" and "Ahhhhh's," and "Really's" and "No Kidding's." I'm a pretty visual learner, and all of this talk about fuel mixture and carb heat, etc., on a piston engine, no less, when I'm used to turbine engines, REALLY helped me to understand more about how the small engines work. He also walked around and demonstrated the angle of attack on the propeller and because of gyroscopic progression, makes the airplane yaw to the left, requiring right rudder on takeoff...  ok, I can see I'm losing you non-pilots. Here's some more information if you're interested. Anyway, I can tell you that two hours was priceless - and I'm hoping to be invited back out again for more (that's a hint, Barb and Phil!). 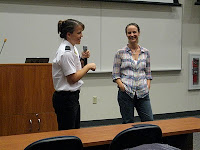 It was then time to travel to Long Beach to begin setting up the Girls With Wings booth at the AOPA Aviation Summit. After carrying my items in, box by box, from the farthest spot my car could have been parked, to the location of my booth (I can't afford to pay the people that provide logistical support for these events to move my things and so I therefore use my own muscles - it makes up for the overeating I usually do on such trips!), I had a Girls With Wings presentation to do! Again, I am so lucky to be meeting such great people promoting more girls' interest in aviation - and one of those people is Monika, the woman behind the documentary Flyabout. Monika and I had just participated in a joint event at Kent State University call Women Take Flight to interest young women to explore the many exciting opportunities for careers in journalism, aviation and filmmaking. Over 150 folks attended! 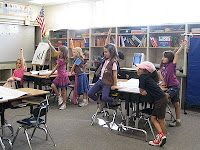 Monika also has a 7 year old daughter who's in Brownies, so I did a presentation for her troop and a group of older Girl Scouts. The girls were amazing - very interested and involved in this introduction to “everything” a pilot needs to know in order to complete a flight. This interactive presentation incorporates various aeronautical tools. My talk always begins by asking the girls if they think they could ever figure out what a pilot does, to which they invariably reply “no.” After showing them navigation charts, demonstrating the methods of communicating with ATC, and playing a game explaining what the flight instruments do, I remind them that they told me at the onset they never thought they would be able to figure out how to fly! See more about the presentation. [I tried to upload video here, unsuccessfully. You can go to the webpage to view three new videos!] 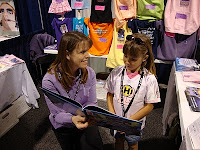 The next day the AOPA Aviation Summit kicked off. I could not have had such a successful booth there without the help of the aforementioned Monika, and Ceci, Adrienne, and Carole - among others. It was AMAZING how many visitors said the came there just to meet me after the article in the AOPA Magazine about GWW. Many folks brought their daughters by just to purchase their autographed copy of the Penelope Pilot book - like Cary here. I would also like to thank Rod of myTransponder for allowing me to participate on a panel "Making Aviation More Social," the video of which is now being shown on AOPA Live. I was able to meet with three CFI's of the Year on this panel, but I treasured the opportunity to meet all of the attendees of the event. Next year, Hartford, CT, September 22-24!

Break down of the booth after the event was much easier with the motivation of being done. Plus I had a good night's sleep to look forward to. Having a booth is hard work, but it's the best way for people to learn about Girls With Wings. Yes, we do also sell items here, but that helps us a little with fundraising. Plus, the more people sporting a "Yes, Girls Can Fly" message the more the word will be spread. Sunday we went to the Griffith's Observatory, a very famous landmark in LA that you might recognize, and Monday (after I took the boxes of remaining GWW stuff to the Post office), we visited Paramount studios. California, although quite smoggy, is really a beautiful place. I've flown over and into it plenty of times, but this was my first chance to see it from ground level. 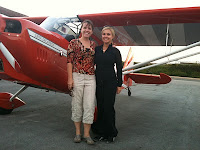 If THAT wasn't enough, my fellow AcroCamper, Michelle, took me for a ride in her Super D to see it from the sky! We flew over to Camarillo, CA, for a bite to eat. Do I look a little green in this picture? It's not from the food. Nor did we do any aerobatics. No, I would like to have one of these in my hangar, but for now, I am so appreciative of friends that are willing to share! Michelle had been considering a Bonanza, but after AcroCamp, knew her future was in a taildragger. She actually picked it up from the factory and had it custom painted in her favorite color, orange. I'm telling you, the new paint was like satin. And the white interior, at least for now, was spotless. No, you local flight schools, Michelle will not be offering this airplane for you to lease quite yet!

And the next morning's two hour drive to cover less than 20 miles to get to LAX nearly concluded my California trip (I had to pull an OJ Simpson in CLT to make my connection). Big thanks to all mentioned above for their willingness to volunteer, extend their hospitality, stop by and say hello, etc. It was a trip I will never forget!