This Halloween weekend I enjoyed my first $100 hamburger. No, thank goodness, my lunch was not actually $100. This is a catch phrase for the practice, a long standing tradition (defined), of flying to another general aviation airport in a general aviation airplane just to go to lunch (or golf or shop, etc.) at another airport. Many of the 5300 or so "General Aviation" or GA airports (compared to about 600 "commercial" airports) are co-located with some fabulous restaurants celebrated by both pilots and the local general public alike. It’s unfortunately getting so expensive for this hobby that they’re now calling this the $200 or $300 hamburger. Those brave enough, of course, of actually figuring the actual cost of operating their own airplane.

My pilot for the day (since I am still doing some CFI training and cannot yet afford to rent an airplane for such a pleasure trip) was Nancy, a fellow Lake Erie 99 (The Ninety-Nines was the first organization of Women Pilots). Along for a ride was Nancy’s husband, Jim, and another 99, Meigs. There are 231,607 airplanes classified as "GA" and Nancy and Jim are part owners in one of them.
They use a timeshare to have access to an airplane, which many people do if they cannot afford or wish to take on the responsibility of buying one outright. They signed a lease in a Cirrus 22 making a monthly payment of less than $1000/mo with two other owners to covering operating expenses. Additionally, they pay an $90 hourly wet rate with covers their maintenance and upgrades. Really, not a bad way to go if you can afford it. See if you should rent or buy an airplane.

So, we all met at Summit Air at Akron’s Fulton Airport, where they keep the Goodyear Blimps (HUGE hangar to left), to prepare for the flight early on this chilly Saturday morning. I have told my fellow 99s, Nancy included, that I was so interested in getting a ride anytime they went flying. Yes, I’ve been a pilot for 17 years, but although it’s been a blast, my flight time hasn't been logged for my pleasure alone. I have been the type of pilot most people think of when they think pilot: someone who flies for the airline or the military. Never a pilot that flies mostly for fun, like many general aviation pilots. By the way, I can't tell you how many pilots are GA pilots because there's not any such category. There are pilots with their private pilot certification that can't fly "for hire" but many pilots with their commercial rating that can do both.

Nancy has been, shall we say?, reluctant to take me flying since I met her. She's got this crazy notion that because I fly professionally that I know everything there is to know about flying. Yes, I know about my airplane, and the kinds of flying that I've done, but not about flying around for hamburgers (peanuts, yes. Colgan Pilots, btw, are understandably a little riled because their new contract will have 6 year captains making less than $40k/yr). So I told Nancy that I wanted to learn from her watching get ready for the flight. I’ve never seen someone so nervous! I was nervous as well, you know, since I'm supposed to be getting ready to teach people how to do this as a flight instructor. I was quite reassured to see watching her that I remember a great deal from my training - such things as calling flight service, for example, as Nancy is doing here.
The truth is, I think Nancy makes a perfect poster child for folks everywhere that are interested in being a pilot but not a career pilot. Nancy flies, just for fun. And fun she is. Always has a smile on her face and a great attitude. This whole flying thing is still pretty new to her. Not the flying thing, per se, because she spent many years as a “stewardess.” Nancy looks 50, though is a smidge older than that; that’s what she was called when she worked for the airlines. I figured that’s where she got the bug. She also had a brother who flew for the Navy and has 360 carrier landings. 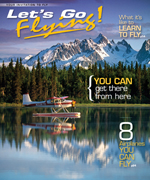 FYI, according to the Airplane Pilots and Owners Association, the average student pilot today is in his 30s, and the typical average active pilot is a decade older. In addition, more than 25 percent of all U.S. pilots with current medical certificates are in their 50s. And some pilots learn to fly after they retire.
Perhaps it was her husband, Jim, along for the flight, that encouraged her to get her license. See Pinch-hitter Course article.
Nope, Jim isn't a pilot.
I've seen Jim around a few 99s events and have to admit, I just assumed he was. I was quite surprised when I asked him outright and he said no. So I asked him for a few words for the blog. Jim says, “I’m in safe hands on this flight with 3 women pilots. Nancy took up flying as a hobby at age 60. Her first instructor was a woman who encouraged her to go for her instrument rating which was also strongly encouraged by her brother. In the middle of that training, she decided to re-start the effort on a high performance single engine Cirrus 22 all glass cockpit. I am very proud of her determination to master that complex rating and fly the Cirrus 22.”
Well, then, what inspired her to pick up flying? If not a career in aviation, a family history of flying, a supportive husband, what?

The answer may be seen in photo to right. The influence of/inspiration from another woman pilot.
Nancy was finally inspired to start flying by the other woman pilot in our group, Meigs. They were both members in another group, the Questers, and Meigs had come in to talk to that group about the 99s, a kind of walking/talking show and tell about women pilots. After the talk, Nancy apparently disappeared, not seen by Meigs until she joined the 99s about two years later. As a pilot. (From right, me, Nancy, Meigs, Deb, and Helen, all Lake Erie 99s). 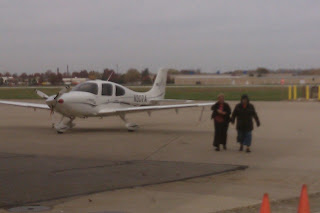 Meigs is a pretty impressive woman herself. Her father was George W. Kirkendall, who worked for Taylor Aircraft, which produced the 1st Piper Cub on which he was the test pilot for its first flight September 12, 1930. Meig's husband wasn't a pilot either, but he talked her into getting a license so they could enjoy more time at their vacation destination by flying together instead of driving! Meigs ended up making 28 cross country trips and joined the Civil Air Patrol flying rescue missions and cadets – amassing over 2700 hours! (To left, Nancy and Meigs finish their post-flight.)
So everyone admires the airline and the military hotshots in their uniforms, leading a cushy life and making the big bucks (cough, cough), but you might walk right past a group of pilots who fly the general aviation airplanes and you wouldn’t even know it. Unless you see the smiles on their faces (and the smears of hamburger grease on their chins). Most people who fly do it because they love it. These are the people who fly for the fun of it. I love it. And I can’t wait to be right into the middle of it.
And for the record, I actually had a $100 pizza. The gorgonzola pizza at the Primo Barone’s Restaurant & Lounge at Venango Airport in Franklin County, PA, is very nearly worth that much.