One of the cool things about having a presence in the aviation world is that people are quite often willing to send me their books to review, as in the case of a book about Amelia Earhart or one on Flying Above the Glass Ceiling. These are two recent blog entries made easy by the fact that I liked the books. I don't usually say anything when I don't. Go ahead. Call me a wimp. But I'm a nice, non-confrontational wimp.

So I kind of figured when I got an email from a marketing agent within a publishing house asking me to review their newly released book that I wasn't going to be all that thrilled with it. Ok, first, it's kind of a stretch that as the founder and Executive Director of a non profit organization (that just received it's 501(c)(3) designation by the way, for any of you thinking about year end donations...) using aviation to inspire girls to achieve their full potential, that I would have a tie in to a book subtitled "The Comet, the 707, and the Race to Shrink the World."

Initially I viewed this request in the same light as vague requests from unknown persons suggesting they do guest posts on the blog about "how to travel with kids," or "how to develop online educational resources." I suppose those topics apply more than "how to drain spinach for a prize-winning veggie quiche," but I usually pass on such offers.

Additionally, the email emphasized, "Sam Verhovek’s Jet Age (on sale 10/14, $27) offers an intimate view into the minds of pioneer aviators – the men [my emphasis] who helped shrink and connect our global village. Jetsetters, pilots, and history buffs alike will receive an invaluable framework for evaluating the current airline industry and appreciating the evolution of astonishing commercial aircraft models."

Not exactly a Girls With Wings niche. 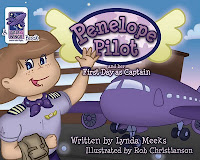 And of course, there's the time issue. Now that I'm simultaneously working on my CFI (Certified Flight Instructor) rating and GWW, there just isn't a lot of free time. Not that I'm complaining, thanks to the recent AOPA article on GWW and the subsequent VERY successful trip to the AOPA Aviation Summit. It's due to this lack of extra time that I haven't been promoting my own book, Penelope Pilot and her First Day as Captain, as much I should. Insert thought cloud above my head, "Oh, to have such an expert staff of people for Girls With Wings...."

And a book tagged with "How Boeing's Gamble Changed the World: Airline Triumphs and Challenges," sounded a bit like a text book.

How wrong I was.

I actually found a space to fit the book into my carry-on luggage to California for the Summit. I was able to crack it open on the trip back, hoping it would act as a sleep aid on my first leg to Charlotte. Well, I never did get to close my eyes, reading the book cover to cover on the four hour flight (I have always been quite the speed reader, too).

Far from a dry narrative of the scientific development of aircraft engine technology, the book is more of a social commentary into the transition from propeller driven passenger airplanes into the standard we hold now for our commercial airline conveyance: jet aircraft. Just ask anyone who finds themselves facing the set of stairs into a "puddle jumper." Airline travel in its beginning stages was loud, bumpy and, um, prolonged. The airplanes utilized big heavy turbine or piston engines with propellers that caused noise and vibration in the cabin. Plus, un- or under-pressurized airplanes can only fly as high as the body can handle, leaving it down low in the turbulent air currents and often storms. The flights were also slow, taking quite often days to fly across the country, but, let it be said, faster than it took to drive. And there wasn't much in the way of regulating the environment for the passengers. Recommended items to pack were warm clothes, face-masks (no air purification) and sick sacks.

So the 1952 appearance of the de Havilland Comet was a welcome addition to the "glamorous" jetsetting life style - only now it was literally, "jet-setting." The British airplane featured a cabin for 36 passengers, "ensconsed in seats covered with a blue herringbone-weave, wool-faced tapestry," and a library, seperate bathrooms for men and women, and, most importantly, a special Comet Cocktail served only aboard the jetliner (presumably not served to the pilots, as well). The airplane's sleek design incorporated four engines enabled speeds of 500 miles per hour, seven miles above the earth, and a fuselage with a fatal flaw. No one at the time was able to determine why three Comets exploded while in flight. You could google the answer right now, but I would suggest that the process as laid out in Jet Age is much more interesting and detailed and worth the read.

Far from shutting down the development of other jet airliners, the competition to build a better mousetrap led to the expansion of the R&D divisions at Boeing, Douglas, Lockheed, et al. And the procurement departments in the commercial airlines of the day, such as Pan Am, Trans World, and Eastern, among others who actually still remain in existence. I won't go into depth into these areas, nor with the insertions of historical factors (like, of all things, ballooning, and the Messerschmitt jet fighter built by the Germans in 1944), but know that the contributing facts put forth by the author seamlessly blend in to the comprehensive retelling of how the jet engine was conceived, built, refined, and then put into generally accepted practice, and the people, some quite famous, who made it possible.

I therefore can confidently recommend this book, especially because you won't learn just about the jet engine, but also the businesses and personalities of the day, how politics and finances have shaped the airline industry and how women have come to play a part in it. Ok, yeah, first as stewardesses but also, eventually, as pilots (there IS a Girls With Wings tie in!). Jet Age, by Sam Howe Verhovek, is really a educational and entertaining book telling the story behind the story in how airlines and their airplanes have evolved.

I'm so glad I was contacted by their "people."