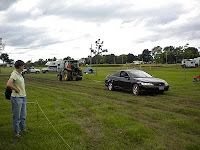 Or should we call it Splosh-Kosh? Yes, this year's EAA AirVenture was a mire of muck and mud for the first few days, necessitating my car's rescue from my new best friend, John Deere. I wasn't the only one needing a tug, however, so bravo to those who made it in to Camp Scholler and, for the most part, kept their spirits up (and stayed civil) despite permanent dirt stains on everything from feet to tarp. We arrived on Friday evening, but within two days new arrivals were being turned away from Scholler and sent to stay in parking lots around Oshkosh until things dried out - which, thankfully, they eventually did. The mosquitoes didn't receive this message to stay away, and in fact invited all of their friends to come on by as well, so for the first time at an Oshkosh I leaked like a sieve every time I drank too much water. The officials at EAA say that attendance was down only 7%, but given the desolation of the North 40 - where people who fly in to KOSH stay under the wing of their plane - I would have thought the percentage would have been higher. However, people who have decided to visit the Mecca of Aviation Enthusiasts will find a way and so perhaps they walked, thumbed a ride or pedaled their bikes instead. 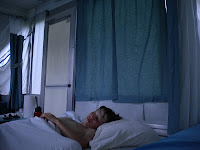 You can see my sister in the picture above - she lives about an hour away from Oshkosh and has come nearly all of the five times we've had a booth to help set up (you'd think she'd learn to lock the doors and turn off the phone by mid July). Her one week short of 13 year old son, Emmett, also helped to set up and "man" the booth on Monday. I was really quite proud of him. He jumped in with both feet to learn the pitch to tell people about Girls With Wings - so visitors know that we are a non-profit organization selling items for fundraising, not to pad our pockets (note my 12 year old car in photo above...). After setting up the booth on Saturday, helping Grandpa on Sunday and then working the booth on opening day, Em was wiped out and was rescued again by mom on Monday afternoon. We hope to have him back next year - he said he's willing, now that he know the ropes. 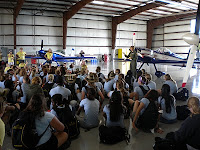 
"Now in its 6th year, the Women Soar You Soar program is shaping up to be one of the best thanks to the number of quality applications pouring in from young women and the generosity shown through scholarship contributions. A 3-day event at the EAA Aviation Center, is designed to engage, inspire, and educate young women from grades 9-12 to pursue their dreams in aviation and beyond. The program includes activities such as flight simulation, workshops, career exploration, and more."

Shown in the picture to the right is Jill Long, a Girls With Wings Role Model, USAF Squadron Commander and Airshow Pilot, taking a few minutes to tell the girls how she caught the bug to start flying. This was a wonderful event - and in my informal polling of the girls the only criticism was that the program wasn't LONGER!

In between Women Soar events, I was running back and forth to the GWW booth to sign copies of our new book, Penelope Pilot and her First Day as Captain (you can purchase a copy online and get one signed as well). Despite attempting to have specific times to do author's signings, many folks wander the AirVenture grounds with no particular schedule so I put myself on a short leash to always be available to personalize the book especially for its eventual recipient. As far as I can tell, the book was purchased for a wide range of reasons - a keepsake for the airline pilot who had just become a Captain, for the kids of the family that the Oshkosh attendee rented a house from, for a daughter, granddaughter, niece, sister, etc., etc., etc., or other young girl in someone's life who could use an inspirational story with lessons in teamwork and responsibility.... But people also bought this book for the male equivalents in the list above. First, because this is not a book just for girls - though it does feature one as its main character, but also because BOYS also need to understand that "Yes, Girls Can Fly!" We sold hundreds of books onsite in one week! Alas, we should have thought to bring more of the matching Penelope Pilot t-shirt....  And our new Girls Need Flight Plans, Not Fairy Tales! dress.... But we're always learning how to do things better.

P.s. if you are looking for a way to schedule your time at Oshkosh, consider using OSHplanner. This is a wonderful tool to bookmark all of the events you would like to attend while at AirVenture.

Speaking of events, the guys from Youth Aviation Adventure and I again put on our popular seminar that we first presented at the Women in Aviation 2010 conference.


7/31/2010 - 8:30 AM - 9:45 AM - Forum Pavilion 11: Starting an Aviation Outreach Program for Kids - Love aviation? Like working with kids? Worried about the decline in the pilot population? Then start an outreach program to get kids excited about aviation. It's not that hard to do and it's fun. You'll find plenty of volunteer help with your fellow pilots. Come hear how two organizations started their programs from scratch. Learn not only how to do it, but how to avoid problems along the way.

I will be honest with you here,  our talk on attracting kids into aviation was not well attended (thought several representatives from the FAA were there, a good sign). Maybe it was because it was held at 8:30 am on a hot, muggy, buggy, cloudy morning, but, as one of the people who did attend mention: the room should have been packed. Not because they should come see me (though I think that would be reason enough, no?) but because the future in aviation depends on getting the next generation(s) hyped up about it as much as we are!

Case in point, one of my honorary Dudes With Wings, Aiden, who came with his dad, Keith to Oshkosh for the first time. These two aviation fanatics spent a full week together exploring Oshkosh and helping out with the booth. Aiden also celebrated his 7th birthday there with a helicopter ride. How cool is that? [Note this DWW's super sweet unisex "Pi-let" t-shirt. The guy knows how to represent.]

Besides these two and my nephew, my Dad also (and always) helps getting ready, staffing and tearing down the booth. What a trooper! And Honorary Girl With Wings, Erika (Callsign Egg) helped for a second year. This was Blackhawk pilot Jacqui's first year working at the booth and she did so with a broken foot! Besides this core of volunteers, we also had, and I would like to thank from the bottom of my heart: Brenda S., Courtney G., Danika M., Barbara M., Carol S., Cindy H., Kate Z. and Lin C., another GWW Role Model. If I have forgotten to put your name here, I apologize. Commence berating.

As far as spreading the word about Girls With Wings, I partook (partaked?) in quite a few interviews, like this one for Aero News: "What if Little Girls Played with Airplanes?" [Several people rightly answered that they DID know some girls that played with airplanes... Fair enough. I didn't choose the title for the article and wasn't asserting they didn't. In fact, the homepage of GWW currently features my niece having a pretty good time with one.]  MySkyMom also published this great picture on her blog after we spoke (story forthcoming). We'll also soon be on Pilots Journey Podcast and FlightTime Radio. Who else did I miss? Oh, I also was interviewed on EAA Radio! Having attempted for over an hour to embed the mp3 file rather unsuccessfully, I'll have to ask you to jump on over to this page to listen to the interview. Sorry and thanks. I'm sure I've forgotten something - I should learn to take notes during this week as some information always gets lost in the melee. There's just always so much going on!

Amid all of this, we still found time (energy?) for some tweetups, like myTransponder's, some beer-and-brat-ing, and visiting with new and old friends - some of whom we'd never met, other than in cyberspace, but unfortunately too numerous to mention. It was, again, a whirlwind, exhausting experience for us all. And therefore I can't wait til Oshkosh 2011. Hope to see you there!