The next morning, I got up early to study. Perhaps you’ve heard me mention that I think that women need to feel like they understand something to feel comfortable doing it. This is me to a T. Me being me, I tweeted, “I have the takeoffs and landings down in the Pitts, but I still need to master that part in the middle.” Master. As if I ever could in a four day "Camp."

Day 3 (May 16th). We got back up into the Pitts in the morning, which I was kind of dreading because I felt I had showed Don the day before that I wasn’t getting this. Now my problem was that reading it in a book and doing it in an airplane (at least for me) were two different things. I am very visual, and needed to see what I need to do before I can do it. For example, the ½ Cuban dictates that you transition from level flight into 5/8s of a loop to the inverted 45° line, 1/2 roll to erect down 45° line, pull to level flight. Makes perfect sense, right? So having barely been there to do it the day before, I tried to put into practice what I had read in the book. As well as reverse ½ Cubans, which I prefer, inverted spin recoveries, loops, slow rolls etc. But by this time they had plugged the leak between the canopy and the airframe (if not the one in my head), so I could hear and I wasn’t freezing! And I got to tweet, “I made the mistake of sticking my tongue out during a reverse cuban. I had to wait til we pulled out to pick it up from the floor.” I am now scared to see the footage from the cameras. I can only imagine what funny faces were captured.

The rest of the day I spent entirely in the Decathlon and worked on my spins. The last time I had done any spins was during my transition from helicopters to fixed wing 15 years ago. During which I screamed. A lot. So Barry and I went out and talked about energy management and spins so he could give me my spin endorsement in preparation for my CFI training, which attests that I received “flight training in stall awareness, spin entry, spins and spin recover procedures…and find her to possess instructional proficiency and competency in these areas.” Posted “Sweet. Just got my spin endorsement. After all this training, those are such a non-event!” on twitter.

We all have our fears, though, don’t we? For one of the other campers, Paul, or “Gump” - you should hear his Forrest impression - it was formation flying. A good number of pilots have a fear of heights, me among them. But for Paul, he was really freaked out by flying side by side with another plane. I thought this was going to weird for me too when Don and Paul wanted to give it another shot, this time flying in formation with me and Barry. For whatever reason, it didn’t bother me at all. Even when Don pulled away in the Pitts and did some amazing rolls as he was flying away. It was like being IN an airshow as opposed to AT an airshow. 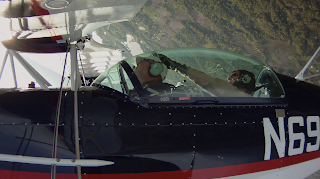 [P.S. The explanation for this picture, as given by Steve Tupper, the director of the documentary: Don told me during the camp that he had discovered some FOD (short for foreign object damage or stuff that can cause it - usually pocket change, the occasional mobile phone, etc.) in the cockpit during a flight with Paul on Day 3. I just happened upon the footage about 14:00 into the flight. Don rolls inverted and sees the FOD just above Paul's head. He taps Paul on the head to get him to move a little and then snatches it in this frame grab.]

During the down times we all mostly hung out in the lobby of the flight school, melting into the cushions of the couch. And what a comfortable couch it was. I posted, “I just had to take my first nap here at AcroCamp. This is a workout.” Sleeping at camp wasn’t the same, either. The hotel bed seemed to go inverted and executed up to and including steep turns at will. Picture taken by ISUHawkeye.

Don’s wife is a massage therapist, and she undid the damage from compressing our spines during the maneuvers. Oh, right, I forgot to tell you about the Gs, which are measured in the airplane on an accelerometer. The trick with aerobatics is actually to keep the G's as low as possible, so that the maneuvers are planned, smooth and under control. Positive, or "upward" g, drives blood downward to the feet of a seated or standing person (more naturally, the feet and body may be seen as being driven by the upward force of the floor and seat, upward around the blood). Resistance to positive g varies. A typical person can handle about 5 g before G- LOC (or Loss of Consciousness), but through the combination of special g-suits and efforts to strain muscles—both of which act to force blood back into the brain—modern pilots can typically handle 9 g sustained (for a period of time) or more (this is how Michele became 6G – almost forcing Don into G-LOC – which eventually became her call sign “G.”). BTW Resistance to "negative" or "downward" g, which drives blood to the head, is much lower. This limit is typically in the −2 to −3 g range. http://en.wikipedia.org/wiki/G-force

So on this, the third day of AcroCamp, folks were coming in, like Rod, of myTransponder, who brought snacks (!), and Kent, another twitter friend who was returning from an aerial tour of Niagara Falls. Unfortunately, friends were also leaving. We said goodbye to Dave and then to fellow camper, Jim. Although Jim earned the callsign “Flubber” at the beginning of camp, he didn’t deserve it by the end of camp. Jim found a home in taildraggers and was able to solo the Citabria before he left. “G” soloed both the Citabria and the Super D! I was also hoping to solo an airplane and get the back cut out of my shirt.

Wait. What? Get the back cut out of my shirt? 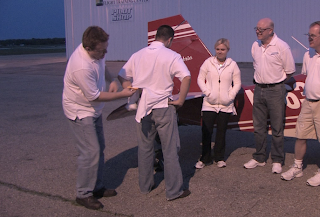 In American aviation lore, the traditional removal of a new pilot's shirt tail is a sign of the instructor's new confidence in his student after successful completion of the 1st solo flight. In the days of tandem trainers, the student sat in the front seat, with the instructor behind. As there were often no radios in these early days of aviation, the instructor would tug on the student pilot's shirttail to get his attention, and then yell in his ear. A successful first solo flight is an indication that the student can fly without the instructor ("instructor-less" flight). Hence, there is no longer a need for the shirt tail, and it is cut off by the (often) proud instructor, and sometimes displayed as a trophy.http://en.wikipedia.org/wiki/First_solo_flight

Stay tuned for the next edition of my AcroCamp journal to find out if I my shirt stayed intact...