Day 2. I think that Don and Barry really know what they’re doing. Instead of going right back into more advanced maneuvers, we had a little warmup session (remember, this was WAY out of my comfort zone and I needed to get back in the groove). I can’t read Barry’s writing of what we did that morning, but I tweeted, “Is it really only day 2 of #AcroCamp? Feels like longer, 'cause I feel like I'm getting the hang of it (hanging from my straps, that is).” 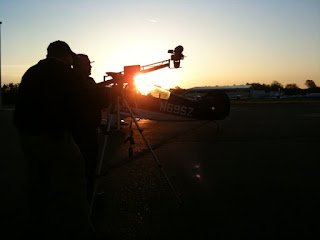 We campers were also having the time of our lives hanging out with some VIPs in the aviation world. Besides Steven Tupper, of Airspeed Online and the creator of this project, we had other folks you might have seen around twitter. The filming was being done by Will Hawkins, of A Pilot’s Story documentary, and David Allen, social networking extraordinaire, whose dream job is to be Ubiquitous Super-Plantery Test Pilot (the guy who flies anything and everything, anytime, anywhere, because he can). Together they do the Pilots Flight PodLog. We were visited by Roger Bishop, of IndyTransponder, who gave us some teaser videos for this year’s airshow in Indiana on June 11-13. Another podcaster, Jack Hodgson, of Uncontrolled Airspace, was there interviewing us for a yet-to-be-named-project featuring AcroCampers (I’ll let you know when he knows). We also saw Rod Rakic, of myTransponder: Making Aviation more Social. Ben Phillips, a photographer, was there as well. I know he got some great pictures of Michele, or “G”, so I’m hoping I’ll see more soon.

Oh, did I not mention MY call sign from the camp? Well, it became “La-La” because of the tendency to put my fingers in my ears and chant La La La La La when I think I’ma gonna hear something I won’t like. For example, when others were coming back from their flights raving about what they had done, I didn’t want to hear something I’d dread doing. Ignorant bliss.

Anyway, it didn’t seem to be necessary. This was May 15th, btw, so I tweeted, “I'm celebrating International Learn to Fly day by learning to feel comfortable upside down. It DOES get easier.” But then I got a ride in the Pitts. If you don’t know what a Pitts is, you probably would picture it exactly if someone were to say to you, “aerobatic airplane.” It’s smallish, with two stubby wings, and two small seats. Yes, the seat is small, but my legs are short. These airplanes were not made for us vertically challenged gals. My first ride in the Pitts had three major issues. One, I could barely reach the pedals or see over the dash. So I had to ..s..t..r..e..t..c..h.. to see to taxi the darn thing. The nose is up so high on this airplane on the ground that you have to point the aircraft toward one side of the taxiway, look ahead of you, then do nearly a 90 degree turn toward the other side of the taxiway, and look out the other side of the canopy to see that no one is in your way. By this time they were using the opposite end of the runway so this made for a very long taxi!

Two, there was a gap between the canopy and the airframe. May in Michigan is considered winter anywhere else and this made for a very cold bite at my neck and had me shivering (but only til we turned upside down again). The wind also caused problem three, because it was hitting the mike and breaking squelch. I had the volume up to try to hear Don over the noise, but the whole flight sounded as if I was in a metal box full of ball bearings! We soldiered on anyway and did some upright spins, aileron rolls, loops, inverted flight, hammerheads, ½ Cubans and reverse ½ Cubans, and Immelmans. I posted “Quick update: I did two flights in the Citabria... and then one in the Pitts! Yeah, buddy. You name a maneuver, and I most likely did it.”

What I learned from this flight was… don’t do “good enough” in getting ready to go fly an airplane. The above problems which distracted me from the training. I kept forgetting to look left. When Don said, “do a loop,” I couldn’t really hear him. Did he say, “do a loop?” “Did he mean now?” Which made me very hesitant in doing the maneuvers – which somewhat decreased the confidence I had built up, even though I was able to at least land the thing myself. I posted, “My dream airplane has always been a Pitts and it's exactly as I imagined. SO responsive and crisp. Immelmans, Hammerheads, Cubans, Spins. Landing the thing is interesting; you have to listen for the runway because you sure as heck can't see it.”

Before I went back to the hotel room, I celebrated a first with Don’s son, Andrew: “I also was the first passenger for the 17 year old son of one of the instructors. Guy doesn't even have his driver's license but he OWNS that Archer.” He’d been in that airplane since he was 2 months old, and was so completely comfortable in it. Truly impressive. Wish I had been able to come close to that kind of proficiency in two days!