The Final Episode of AcroCamp 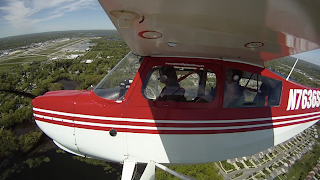 To continue the solo discussion from the last post: I also achieved a measure of proficiency in the Citabria, and so I tweeted, “If the winds cooperate I may get to solo the Citabria at #AcroCamp too.” Like the other campers, I spent a session doing some traffic patterns and getting comfortable landing the taildragger. Barry and I decided to take a break and get back in the air – at which time he hoped to get out and let me go it alone. I even wore my AcroCamp polo for the occasion, excited because technically I had never actually had a solo ride that would qualify me for the shirt ceremony.

Good news: I got the skills and the confidence to solo the Citabria. Bad news: Mother Nature decided to kick up the wind.

Well, the second flight was a mess. First, I guess I was back to being a bit nervous. As I taxied up and held short of the runway, I attempted to call tower and state my intentions to do closed traffic. I keyed the mike to identify myself (with my type airplane and the tail number) and said, “Sigh-, Sigh-Sigh…” I was literally staring at the placard in the airplane that said Citabria and tried to get out “Sit” for “Si-Tah-Bree-Ah.” No, instead all I could do was start to say, “Sigh-Tay-Shun” my most recent airplane. Of course everything we said was being recorded because of the documentary, but all transmissions with ATC are not only recorded, they are broadcast. So Kent, or @ flyingcheezhead tweeted, “Funny moment departing #AcroCamp: listening to @GirlsWithWings call tower and not be able to say "Citabria" instead of "Citation." ;-) ROFL”

Alas, now the winds were picking up and were not right down the runway, much less light and variable. No, they were pretty much kicking the left side of my butt. This was fine under normal circumstances, since you need to be able to land the airplane no matter what the weather, but we were short on time and I was not going to get proficient in the time left. “Completely bummed. The wind has cursed my plans for soloing the Citabria.” 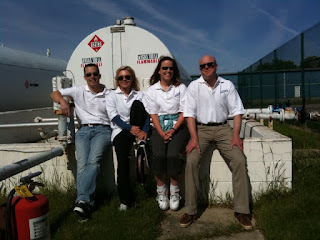 So I got the spin endorsement, but not the tailwheel endorsement. There was one more thing I had to do. My two Pitts rides were less than spectacular. I wanted to have at least one amazing ride in this thing. Don talked to me a bit about recognizing what I needed in my instruction, “Tell, Show, DO” and so we went up to finish AcroCamp with a bang. As a future flight instructor, I need to learn from Don and Barry and be able also to recognize how best to instruct each student – because not everyone learns the same way. I finally learned my lesson about getting situated in the front seat, too. I not only was sitting on about a foot and a half of cushions (so I could see) I was also wearing some Nike sneakers Ben had outfitted with lifts. They're on my feet, but I'm kind of hiding them. Surprisingly, they're not that hard to walk in. One just feels a bit like Lady Gaga. Or Lady LaLa, as it were.

Here’s a list of what we did on that last flight (in no particular order, for those of you who are checking for “energy management” compliance):
Half Cubans
Reverse Half Cubans
Immelmans
Hammerheads with roll spins (at least I think this is what Don wrote in my logbook) such as the one shown here:


Obviously a couple of those require explanation. First, a tail slide. No, first let me tell you about something on the Pitts (and most other aerobatic airplanes). On the left wing (remember how I mentioned you look at the relationship of the left wing to the horizon to level the airplane?) there is a protrusion designed to allow the pilot to recognize what angle to the horizon they’re in. For example, a Cuban requires to be 5/8ths into a loop. How are you gonna know that? The Citabria’s indicator was pretty simple, just a rod with the end bent a bit. The Pitt’s one had probably 6 or 8 spokes on it. The Pitts one also had a 6 inch length of string tied on it. This was so (I can’t imagine any aerodynamic need for it) the pilots could go vertical and see the string streamlining straight down. I suppose there was an instant at the top of the vertical climb when the airplane was just hanging there that the string stayed straight down because of gravity. But then, the string bent. And then folded back on itself. And then, as the airplane descended vertically backwards, the string completely reversed directions!

And the humpties. You can refer to http://www.iac.org/begin/figures.html for a description of all of these maneuvers, but I’ll try my best to explain. The Pull Pull Pull means you pull back on the stick to go straight up. Pull again, to go over the top and straight down, then pull back to level flight. The Pull Push Pull means you pull back on the stick to go vertical, then PUSH to come over the top and head straight down toward the ground – kind of like being in a roller coaster. This was a great way to conclude this camp, because this was my nightmare scenario. I couldn’t imagine having that view – but again, by the end of training, it was a BLAST. (Note: I’m definitely not saying I’d ever go rent an airplane and do this myself – my confidence came from knowing Don OWNED the Pitts, if you know what I mean.)

After the flight, I was wrung out. But because I skipped out on an earlier dinner, I stuck around to have dinner with #AcroCamp crew before I had to drive back to CLE.  I wasn’t much fun, I admit. I ordered a huge steak to celebrate my huge achievements, then got in the car to return home. It was definitely time to wake up in my own bed. My next tweet: "CLE arrival 2am post #AcroCamp. Despite my best efforts on trip home, the Honda couldn't execute maneuvers nearly as well as the Pitts.”

Well, that's my adventures at AcroCamp. I hope you enjoyed reading about them as much as I enjoyed having them (fat chance!). Please stay tuned to the AcroCamp blog to find out when the documentary will be released.  Check out more pictures at http://www.facebook.com/album.php?aid=2084204&id=1453705023&l=21a8ea98e1