"Flying is a lot like playing a musical instrument; you're doing so many things and thinking of so many other things, all at the same time. It becomes a spiritual experience. Something wonderful happens in the pit of your stomach." - Dusty McTavish 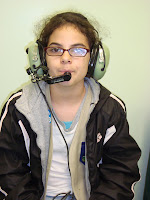 When I give a presentation to girls I tell them that I am going to teach them "everything" they need to know about being a pilot. I have learned the hard way that in the literal mind of a kid, they think I will actually be able to do so in an hour long presentation. I need to stress that all I'm really doing is giving the girls the basic building blocks that every pilot uses. One of the things I teach the girls is the phonetic alphabet so they know how to use their tail numbers as call signs and to make a basic radio call.

One of the tasks that a pilot needs to be proficient on is talking on the radio. As I've referred to on the last couple of posts, communication between pilots is important. But for me, in my job, talking to other pilots is pretty rare. In the early days of flying, pilots self regulated - or kept themselves (hopefully) clear of other traffic. With the increasingly complexity in the world of flying, though, we needed to develop a system to control all this air traffic. Hence, air traffic controllers.

Although I've gotten used to talking on the radio (picture from my Be1900 days to left), knowing you're transmitting to everyone within hundreds of miles can sometimes lead to a little foot in mouth disease. I still make stupid little mistakes. You know, say my call sign wrong. Miss a radio call. Say I'm at 31,000 feet instead of Flight Level 310. Or worse, get a radio call such as, "ExecJet 123, Descend now to FL 240, slow to 300kts in the transition, THEN descend to cross 35 miles SW of ABC VOR at 17,000, local altimeter 29.94." And all I can answer is, "Huh, what?" New pilots are very intimidated by talking on the radio, so there are books like the one to the right to help people to be more comfortable:

I always talk about the Aeronautical Information Manual, the "handbook" for pilots. One of the chapters contained in this book is the Pilot - Controller Glossary: compiled to promote a common understanding of the terms used in the Air Traffic Control system. It includes those terms which are intended for pilot/controller communications. The definitions are primarily defined in an operational sense applicable to both users and operators of the National Airspace System.

Even though the introduction promises that: "Use of the Glossary will preclude any misunderstandings concerning the system's design, function, and purpose," it most certainly doesn't! I referred to those "petty things" in the last post. Their are clear "don'ts" like saying "All traffic in the area please advise," but there are many more that some pilots just find SO annoying. One of the pilots I flew Hueys with in the National Guard would physically flinch every time a pilot would check in on a frequency by saying the words "with you." As in, "Cleveland Center, Citation123BC with you at 13,000ft. " The "with you" is totally unnecessary and contributes to frequency congestion. And excessive flinching.

Ok, two words, big deal, right? A family member, who I will not describe further to protect my butt from getting kicked, wanted to take me for a flight in his airplane, but the airplane required maintenance first. He called the ground controller to request clearance to taxi from the hangar to where the mechanic was located. A proper radio call would have been something like this, "Airport Ground, Skylane123LW, at My Hangar, request reposition to Proficient Maintenance Hanger." Instead, this relative said something like this, "Yeah, uh, Airport Ground... I'm parked over here at My Hangar, and I need to go on over to Proficient Maintenance Hanger for some work on my airplane..." Yikes. WAY to much information. Brevity is key.

This verbosity is not always on the part of the pilot. In fact, just the other day a captain and I were given taxi instructions clear of the runway to go to the FBO. The clearance sounded something like, "ExecJet123, taxi Charlie, Hotel, to parking." Unfortunately, we weren't entirely familiar with this particular mid sized commercial airport, and there happened to be at least two FBOs off of Hotel (intermixed with a couple dozen hangars and other buildings).

Our attempt to clarify how far down on H were thwarted as the ground controller transmitted, "Airliner456, do you have time for a question?," thinking he was done with us and there was apparently no one else who would need to transmit on ground. Unfortunately, what followed was a long discussion on why this airliner chose a shorter runway despite the longest runway being the one in use. He was a new pilot and was interested in what factors would contribute to this decision. In itself, very admirable in the pursuit of knowledge.

Meanwhile, we were taxiing slowly, referring to very vague airport diagram trying to figure out where to turn off the taxiway onto the ramp. And of course there was a passenger on board, making us look like we didn't know what we were doing or going (quite a coincidence, considering we, well, didn't). When the controller, a pilot as well, had all of his questions answered, we were able to get revised taxi instructions to the proper FBO. As anyone in aviation can tell you, do not be afraid to ask for clarification. Or for "progressive taxi instructions."

There's that can of worms again. Seems like I'm always bringing up terms I should probably explain further. But I'm going to stop here, because my dad is anxiously awaiting my attention as we are going to do some home renovation work today. I managed to come up with quite a few references on this subject, so next time (I'm not promising tomorrow since I have 100 year old house) I will talk more about the complexities of pilot - controller communication.