Today I did my first day of STEP training. There have been so many people tripping going down the stairs of the Citation X, the company is trying to avoid any potential lawsuits...

... Nah! I'm just kidding. Today WAS my first day of STEP training, but STEP stands for Scenario Based Training and Education Program. Instead of doing the same old instrument approach proficiency practice and single engine and other emergency procedures, the company has determined that a lot of 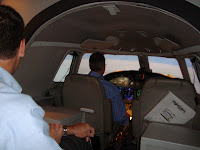 risk involved in our everyday operations involves threat and error management. In other words, recognizing the first link in a chain of events that may lead to an incident or accident. Instead of taking a checkride, the instructor evaluates our SOP (Standard Operating Procedure) knowledge and decision making skills.

I flew in the simulator first. This, believe it or not, is almost easier, since the pilot in the right seat has to handle all of the checklists (normal and abnormal ones), instrument approach plates, programming the radios, talking to ATC, etc. The pilot in the left seat just has to fly (and direct the person in the right seat - however at this point in our careers, both pilots have a pretty good idea what to do!). I had this job for the second half of the sim session and at one point tried to tune up the frequency to receive the ASOS (Automated Surface Observing System): 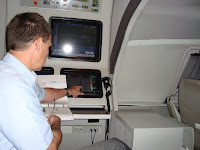 If you were paying attention in the picture above, you'll see that ... THERE'S NO ONE IN THE RIGHT SEAT! Isn't this a two crew airplane??

Well, yes, it is. As I was trying to tune up the ASOS, and not receiving it, I had to turn around and look at the sim operator, Phil, shown to left. He was holding up a sign that said, "Say you're not feeling well and have to use the lavatory." Disbelievingly, I told the acting Captain (in reality a First Officer just like me), that I had to go. Phil told me to sit down in a seat in the back and buckle up.

After not too long, my training partner, Robert, finally says, "Hey, what's going on here?" or something to that effect. Phil acted as the lead passenger and tells him that I had tripped and hit my head and appeared to be unconscious. As a result, Robert flew the approach and landing single pilot (after declaring an emergency - since this is a 2 person crew airplane, a single pilot operation is non standard). He did a great job. Such a great job that w 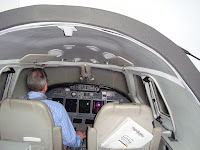 e had time to practice our approach and landing into the Hudson River. Yes, to see how we would have done under the same circumstances as Sully and his crew. Although this might seem like an unlikely scenario and somewhat gimmicky (even a time waster?), it was a great illustration of the glide characteristics of the Citation X and practical application of a procedure (Dual Engine Flameout) that we are required to commit to memory but some times don't completely understand because they are not (usually) applied.

And this is what that sim training is for, illustrating the capabilities of the airplane without risk to the crew or equipment (at a lower cost than actually operating the actual airplane). And continuously developing the skills of the pilots in order to maintain the safety of our operation.