I often post about learning something new from a fellow pilot who may or may not have been flying jets for longer than I have. I am not too proud to say that I also learn from private pilots, aviation hobbyists and non-jet pilots as well.

If you are not already on Twitter, it is a real-time short messaging service that works over multiple networks and devices. I am on it all the time, and refer to the people I have met on there often. There are also quite a few people that I already know that have popped up on Twitter. It's a really amazing application! Anyway, I'm not sure how it came up, but someone mentioned how transient jet pilots can be a little, ahem, annoying to single engine pilots practicing maneuvers in their local "uncontrolled" airport. 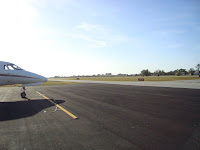 Now, don't read uncontrolled to mean uncontrollable. In fact, due to this confusion, the correct term to refer to an uncontrolled airport is a Non Towered Airport. The Aircraft Owners and Pilots Association (AOPA) Air Safety Foundation has put out an excellent guide for understanding the basic procedures at such airports. (You'll see me refer to them often - if you are a pilot and not a member, you should be!) I won't go into all of the operating procedures at these airports. The AOPA guide to NonTowered Airports is a very user friendly, full color, easy to understand explanation of how pilots should operate at these airports. This is not a official document so AOPA makes this disclaimer:

The Advisory Circular noted above says the same things as the AOPA guide, but in technical pilot-ese.

Ok, the first question you might have is why would I go to a nontowered airport if so many of the airports have air traffic controllers in towers to provided direction to the airplanes there? From From an FAA Safety Seminar: "Nontowered airports—those not served by an operating air traffic control (ATC) tower—are much more common than towered fields. There are approximately 13,000 airports in the US that are nontowered, compared to approximately 500 that have towers. Safe operations can be conducted because pilots put safety first and use recommended procedures. Most mid air collisions occur within 10 miles of an airport."

You might think that as a pilot of a mid size jet I would operate out of towered airports, and for the most part I do. Every once in a while I visit (and sometimes blog about) nontowered airports. In fact, just the other day I picked up a passenger at such an airport. We taxiied out to the runway making "self announce" calls on the Common Traffic Advisory Frequency, or CTAF. The CTAF frequency can be found on sectional charts, in the Airport Facility/Directory ( a pilot’s manual that provides comprehensive information on airports, and other aviation facilities and procedures - sample page shown at right), AOPA’s Airport Directory, instrument approach charts, or other airport directories. Since CTAF is just an open frequency to let other pilots in the area know what I was planning to do, I was required to call a Flight Service Station (FSS), Burlington Radio, on another frequency, to pick up our IFR clearance (this can be given by a controller located on the field). According to the AIM:

Now technically, a pilot can take off without talking to any ATC facility and maintain responsibility for avoiding other traffic (that is, as long as the weather will allow the pilot to remain under Visual Meterological Conditions or VMC). We call this "see and avoid." It requires extreme vigiliance for other airplanes that may be operating in the vicinity. For safety reasons, our company requires us to pick up our clearance before taking off. This way, when we are cleared by ATC, our clearance is relayed to us through the FSS, and we are given a "void time." We must take off by this time or call the FSS and let them know or they might lauch Search and Rescue if we do not pop up on the overlying radar for the airport. Yes,

radar coverage does not always go to the ground. So since ATC is maintaining responsibility for aircraft under IMC (Instrument Meteorological Conditions), but cannot see a transponder blip, they will only let ONE IFR aircraft into that block of airspace at a time. Transponder to left is "squawking" 1200, the standard code for aircraft operating VFR.

This restriction translated into a very long hold at the end of the runway. We had to explain to our passenger that the delay was because the FSS needed to hold us on the ground until an inbound aircraft had landed at the airport. When that aircraft cancelled IFR, the controlling ATC agency would allow one aircraft into that airspace. On climbout, we would switch from the CTAF frequency to the overlying controller's frequency. So operations at these airports are not so much "uncontrollable" as they might appear. It just requires proper procedure being exercised by the pilots.

So back to why I bring up the twitter connection. The twitter friend brought up how annoyed local pilots can get when some transient jet pilot blasts into their CTAF and self announces something like this: "Pleasant Airport, ABC123 is a Citation X 20 miles to the east at 6,000 feet, inbound for landing, any other traffic in the area please advise, Pleasant Airport." When I was taught to fly way back when, we were taught to say the "any other traffic in the area, please advise (AOTITAPA)" phrase to get anyone else listening to the frequency, and operating at that particular airport (sometimes the frequency is used for more than one which is why we say the airport name 2x), to let us know to keep an eye out for them.

Somewhere along the way, however, the Aeronautical Information Manual started to advise that AOTITAPA is “not a recognized self-announce position and/or intention phrase, and should not be used under any condition.” Therefore, anyone using this phrase was also announcing that they had not studied this reference in a while. So when this fellow Tweeter called me on it, I was a bit embarrassed. And also confused. If concerned with safety, shouldn't we pilots be asked, "Hey, anyone out there I might have a mid-air with?" Not as professional in my opinion. In fact, this Tweeting pilot said that local pilots found it SO annoying (kinda like a big fish alpha male invading their pond). But I felt I need to say something, especially since for the most part I was communicating with the controller on the overlying frequency and had to just momentarily switch to the CTAF to provide myself and other pilots a heads-up that I was coming their way. I couldn't monitor for an extended period of time to listen to see if someone else self-announced. Hmmph.

Within a month of this discussion, I met an FAA representative and asked him why this phrase had become taboo. His explanation matched the one given in the AOPA guide as a Courtesy Tip.

These days, a lot of pilots wrap up their initial position announcements with a request: “Traffic in the area, please advise.” Don’t be one of them. The phrase is redundant (we’re all supposed to be listening and selfannouncing anyway), and it contributes to frequency congestion.

So as near as I can tell, we can make the request, but just not say the exact phrase? In the interest of safety, I'm still going to ask. Airplanes move fast, the sun gets in your eyes, someone might be doing a non-standard traffic pattern, or that high speed jet may just assert its supremacy by expecting everyone else to get out of the way! Tomorrow I will research and post some information on that phrase I used earlier: Most mid air collisions occur within 10 miles of an airport.