Previously I posted a blog entry about a crew's incomplete postflight that resulted an airplane being grounded on the next morning's preflight. I've been trying to find some kind of regulation stating what a pilot's responsibility for the pre/post-flight, without success. Even the airplane checklist, which is a quick reference step by step listing for tasks pilots have to accomplish for every phase of the aircraft operation, is pretty vague. Some literally say, "Aircraft Condition: Check." The more complete Operating Manual or the owning company or airline might specify other "high failure rate items" to check (like my employer), but the Federal Aviation Regulations pretty much hold the pilot responsible for everything. The vagueness of this wording allows for an all inclusive legal responsibility to which to hold the pilot. 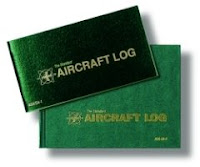 Airplanes are assigned maintenance logbooks, like this one at left, to help keep records of entire aircraft in order: inspections, tests, repairs, alterations, Airworthiness Directives, service bulletins, and equipment additions, removals or exchanges. This is a small book, by the way, for a "small" or simple airplane. Some company operations allow for pilots to enter "write-ups," a way for the pilot to communicate with a mechanic who may not be available when the pilot lands, which also allows an ongoing record of any ongoing problems with the aircraft, for example: pilot seat broken. This may be something the mechanic wouldn't notice on a regular inspection, or perhaps the seat (or other item) broke during the flight! A large, complex airplane will have a binder (or two) and records backed up at the home office.

There has been an email circulating with some humorous writeups that might make more sense to any non-pilots now. If not, please ask. Enjoy!

After every flight, UPS pilots fill out a form, called a 'gripe sheet,' which tells mechanics about problems with the aircraft. The mechanics corrects the problems, document their repairs on the form, and then pilots review the gripe sheets before the next flight.

Never let it be said that ground crews lack a sense of humor. Here are some actual maintenance complaints submitted by UPS pilots (marked with a P) and the solutions recorded (marked with an S) by maintenance engineers.