Just as all good things must come to an end, I had to return from Sun n Fun on friday to get home in time to go to work on saturday. *sigh* 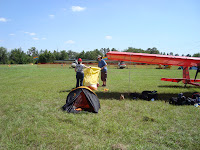 The picture to the right is a couple of my twitter friends helping to set up tents. Mine is the one in the front. My cocoon, that is. I just bought it for SnF, and made the mistake of crawling into it headfirst. I got my legs swung around, but then I was stuck folded in half. There was not enough clearance for me to get my head back toward the opening. Luckily the designers had built in a zipper vent in the top of it so I could get the additional room to lay myself out again! You can see Arty's ultralight to the right (more on that in a bit).

My new found twitter friend, Jo, to the right in the photo, is an aviation photographer and I had a great time following her around watching her take pictures of airplanes. Though not a pilot, Jo knew every airplane on that field and patiently gave me an education. Some of her pictures. To the left is Julie. 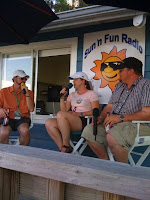 The first person we met there was DaveFlys, also not a pilot, but a huge aviation enthusiast. He helped out with Sun n Fun radio the whole week and in turn had an awesome time. He was kind enough to do a Pilot's Flight Podcast with yours truly, too! Dave is to the left and Will is to the right (not the best picture of me, truly, but I wanted to show you Dave and Will). Will is half of Wilco Films, which is producing the documentary, along with Rico, A Pilot's Story: 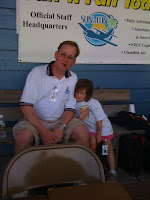 You can't see him in this picture, but this is where I met Jack Hodgson, who writes about the people and places of aviation in his column "Around the Field", and he is the producer & host of the popular aviation podcast "Uncontrolled Airspace". I also met with Marty, of Cleveland, TN (not OH, like me). There was four year old Ella, daughter of StephenForce, of the Airspeed Podcast. I gave Ella some Girls With Wings tattoos, which she shared with another girl. I also got her hooked on the GWW game online (sorry, Dad).

Let's see. I also met myTransponder's founder, Rod, who has developed an online community for pilots. He and ForeFlight, creator of aviation tools for the iPhone & iPod, actually sponsored a "Tweetup" thursday night, where I met AirPigz, who holds great caption contests on his site, among other things. I know there were more, so if you'd like to add your website to this entry, please enter it as a comment below.

I also finally got to meet with Arty! Her Ultimate Adventure is really picking up new momentum with new interviews, sponsors, etc. Here are a few of the links to articles.

She also got picked up by AOPA for their push to pick up new pilots. Here is an article and this is the AOPA "Let's Go Flying" site (Arty gets credit if you sign up on this site). They had her doing a series of seminars at Sun n Fun.

Also, read this AvWeb story on her and see a video!

And here is her route home. Can you come out to meet her? It'll make the THREE week trip go that much faster. She would love to meet you, too!