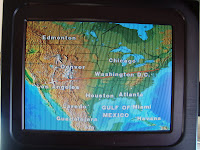 Here's the scenario: on our climbout from NJ, we received instructions from ATC to climb to progressively higher altitudes. As we approached FL410 (or approximately 41,000ft in the air), our rate of climb became shallower than the standard 1500 ft per minute because we were so heavy with the fuel needed for the long flight (route shown here on our Airshow display). In case you aren't familiar with this blog, I fly the Citation X, which has a service ceiling of (or it can fly as high as) 51,000ft. 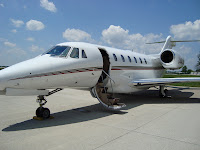 At FL430, I put in a request with ATC for a block altitude of FL430 to FL470 to allow us to be able to fly at any altitude in between at any time. The only restriction is that once I report level at an altitude or leaving an altitude, I am no longer cleared for the block. Why would ATC allow me to be so imprecise? Aren't they supposed to be providing traffic separation (usually mandated to be 1000ft)? How can they do that when I could be at any altitude within a several thousand feet?

Well, mostly they can do this because the vast majority of airplanes have a service ceiling of 41,000 feet, so there are few other airplanes for us to conflict with at these higher altitudes. Each time I was transferred into another controller's sector, I checked in with my call sign and told them I was in a block from FL430 to FL470. Occasionally the controller would want to know specifically what altitude we were at, for example, FL432 (or 43,200 feet).

So why would I want to do this? A step climb, that's why. It's interesting to note how little information I found when I did a search on this term on the internet. Wikipedia, of course, did have an entry:

In aviation, a step climb is a gradual climb from one cruise altitude to another in fixed steps, intended to keep an aircraft flying at the most efficient cruise altitude possible.

Since the early days of jet aircraft and commercial travel, the technique of gradually climbing in cruise altitude as fuel burns off and the aircraft becomes lighter has been widely used by pilots. The altitude that provides the most fuel-efficient cruise at the start of a long flight, when the aircraft is fully loaded with fuel, is not the same as the altitude that provides the best efficiency at the end of the flight, when most of the fuel aboard has been burned. This latter altitude is usually significantly higher than the former. By climbing gradually throughout the cruise phase of a flight, pilots can make the most economical use of their fuel.

Originally, a simple cruise climb was used by pilots. This amounted to a simple, continuous, very gradual climb from an initial cruise altitude to a final cruise altitude, and made the most efficient use of fuel. However, with increasing air traffic and the assignment of distinct flight levels to specific flights, airways, and directions of flight, it is no longer safe to climb continuously in this way, and so most flights compromise by climbing in distinct steps—a step climb—with ATC approval, in order to ensure that the aircraft is always at an appropriate altitude for traffic control. While not quite as efficient as a continuous cruise climb, step climbs are still more efficient than maintaining a single altitude throughout a flight. The step climb intervals may be 1000, 2000, or 4000 feet, depending on the flight level rules which apply on the particular airway being flown.

Where traffic is not an issue, cruise climbs may still be used. The Concorde, for example, used a continuous cruise climb throughout its flights, since there was never any other traffic at the same altitude (nearly 60,000 feet) in the same direction.

In most modern commercial airliners, computers such as flight management systems (FMS) calculate and/or execute the proper steps in a step climb, in order to maximize the efficiency realized by the technique. 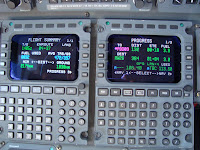 In our Citation X, we do have an FMS (pictured at left) that allows us to program in a step climb. The FMS interacts with our autopilot, so we can select the FLC mode (Flight Level Change) at, for example .85Mach, when we are going .84M at FL430. When the airplane burns off fuel and is able to accelerate past .85M, the aircraft trades off this energy into a climb, even if it is just a foot. The picture at below right is of our PFD, or Primary Flight Display. On the upper right of this screen is our target airspeed, .85M, which is also shown on as a magenta caret on the right side of our airspeed display (or "tape"). In green is our actual airspeed in knots, 232k, and our actual Mach, .84M. Currently we are "stuck" at an altitude 44,200 feet (shown in green on the right hand tape) until we can again accelerate past .85M. The blue 47000 above our altitude tape is the highest the autopilot will let 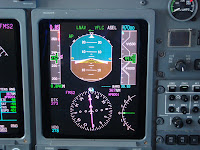 us climb (the top of our assigned block). It might take us more than 200 miles to climb 1000 feet, and we may even descend, should we go through slightly warmer air (engine performance is decreased if the temperature is warmer than ISA - or International Standard Atmosphere). On this picture to the right you can partially see our MFD, or Multi Function Display. In that little box you can see an SAT of -55; should this change by even a degree, it will cause us to climb (better efficiency) or descend to maintain our pre-selected airspeed. This is an advantage of getting a block altitude over a cruise climb (where we would not be able to descend).

Whew! Got all that? So, Lynda, what is your point? If you look back at those FMS screens above, the one on the right says "Progress." You can see that our ETE, or estimated time enroute to our destination (shown on the second line down by RW26 since we already have the approach to the runway programmed in) is 01+04, or 1 hour and 4 minutes. The step climb may only shorten this by only a couple of minutes, by allowing us to fly at a higher mach speed at a higher altitude, but would decrease the airplane's hourly operating cost. 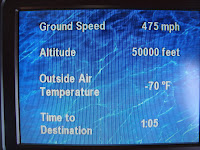 The next number is the one that could change significantly by utilizing a step climb. Under the fuel, you see 3.0, which means 3000lbs of fuel remaining when we arrive (in aviation we use pounds of fuel, rather than gallons, since we are more concerned with weight). Without the step climb, this could be 400lbs less. And that's 60 gallons of fuel. At around $5/gal, this adds up to a savings of $300. Big deal, you might say. Well, even though I'm not paying for the fuel when I fly, every little bit helps the bottom line and the environment. Why wouldn't you fly more efficiently?