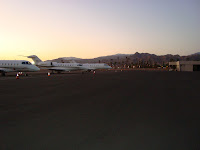 No, not the weather, the aviation industry.

It has been my "feeling" that the aviation industry (read: pilot hiring) is going to get better over the next few years. Why? Because right now the airline industry is struggling and a lot of pilots, getting frustrated, are leaving. Plus many pilots are nearing retirement age. And people are not going to stop flying.

So the demand is going to stay the same, or likely increase, while the demand goes down. Those pilots that stick it out during these tough times will benefit from their dedication.

That's my idea, anyway. I have looked several times for information supporting or debunking my theory, and find it hard to find. This morning I saw this article:

Good Opportunities In Aviation? It's A Tough Sell from AvWeb 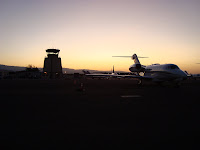 With Boeing, Textron, Cessna, Cirrus, Piper and Mooney either cutting back workers, hours, or operations, it's hard to see beyond the recession to a time when skilled aviation personnel will be sorely needed, but advocates say that day is coming ... maybe sooner than you think. The trick is that the predicted drought isn't the result of an economic boom or bust, but has to do with a generational shift. "The aerospace and defense industry does not have nearly enough skilled workers, especially engineers, to replace the ones approaching retirement," according to an ABC, San Francisco, report. U.S. News Friday expanded that argument to include pilots, stating in its "Best Careers" section that the outlook for employment of aircraft pilots and flight engineers is expected to grow 13 percent through 2016, and keep pace with the average growth for occupations on the whole. The foundation of that article hinges on information provided by a publication by the Bureau of Labor Statistics that appears to have been collected prior to 2006 but, pilot retirements have long been expected by many industry analysts to be one driving force for a shift in supply and demand. Meanwhile, a recent article published by the Hartford Courant states that at least one flight school in the northeast "has seen an increase in demand for its services, particularly flying lessons" currently and in spite of the economic downturn. However, with that increase has come a shift. "There's been an increase in students over 50," the article states. No one should expect those new pilots to be seeking careers in the cockpit, so theoretically those future jobs created through airline restructuring, the expansion of regional services, the economics of smaller aircraft and air-taxi travel and the expansion of global shipping are all expected to contribute to demand. But there are some oddities in the numbers. 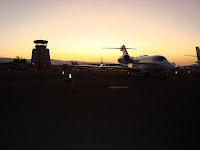 According to FAA statistics quoted by the Courant, there has been a 27 percent increase in student pilot starts over the past five years. It should be noted that for whatever reason, that increase has been limited to the Eastern United States. Nationwide, the number of pilots fell three percent over the same period suggesting a trend that would not be matched by any expansion of the aviation industry.

Unfortunately, I tried to search for both the ABC and US News articles, to no avail.