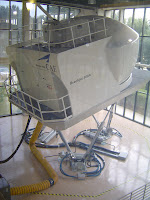 Hi All,
I'm sorry about the silence from this blog - especially since I've gotten a couple questions about this simulator that we do our pilot training in. I took a couple of pictures of the actual sim because it looks nothing like the Microsoft Flight Simulator computer game!

(Wikipedia) A flight simulator is a system that tries to replicate, or simulate, the experience of flying an aircraft as closely and realistically as possible. The different types of flight simulator range from video games up to full-size cockpit replicas mounted on hydraulic (or electromechanical) actuators, controlled by state of the art computer technology.

Obviously, we are not be able to do things in the airplane to accurately simulate potential problems we pilots have to react to. For example, an engine failure in a go around (also called a balked landing). The high power settings on one engine with no power on the other engine can result in a loss of directional control. The airplane can potentially veer toward the operative engine with a loss of altitude (and you can guess the consequence of this). With practice, this can become a "non-event" (not really, of course an engine failure is a big deal - but we learn how to instinctively control the airplane through repetition).

I had someone ask me once - after she had experienced (as a passenger) an inflight emergency. She asked how the pilots stayed so calm and how they knew what to do. I told her that the sim is an opportunity to see the "worst of the worst" so we knew what the airplane was capable of, and to make us pilots proficient in reacting to emergencies. We have a saying in the aviation community, "aviate, navigate, communicate." So the first thing the pilot is concerned with is making sure the airplane is flying. Once the airplane is under control, we can worry about where we are and where we're going, and THEN start talking to Air Traffic Control to get us safely on the ground. 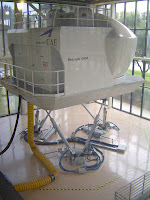 Simulators have changed a lot since I first started flying 15 years ago. In fact, when I was training in the Army, our flight simulator was the actual fuselage of a Huey with the windows painted white so we couldn't see outside (not that it would have helped seeing a bank of computers). These computers were hooked up to the flight controls and the instruments so we could simulate flight. The simulator never moved. It was pretty simple - but got the point across (it also saved a lot of gas money).

As you can see by the pictures, simulators are now fully maneuverable, so the pilots still get the "feeling" of flying. The graphics inside are pretty realistic (though they can be a little disorienting - since they're two dimensional computer images).

Modern High-End Flight Simulators (Wikipedia)
High-end commercial and military flight simulators incorporate motion bases or platforms to provide cues of real motion. These are important to complement the visual cues (see below) and are vital when visual cues are poor such as at night or in reduced visibility or, in cloud, non-existent. The majority of simulators with motion platfoms use variants of the six cylinder Stewart platform to generate motion cues. These platforms are also known as Hexapods. Stewart used an interlinked array of six hydraulic cylinders to provide accelerations in all six degrees of freedom. Motion bases using modern Stewart based hexapod platforms can provide about +/- 35 degrees of the three rotations pitch, roll and yaw, and about one metre of the three linear movements heave, sway and surge.

These limited angular and linear movements (or "throws") do not inhibit the realism of motion cueing imparted to the simulator crew. This is because the human sensors of body motion are sensitive to acceleration rather than steady-state movement and a six cylinder platform can produce such initial accelerations in all six DoF. The body motion sensors include the vestibular (inner ear, semicircular canals and otoliths), muscle-and joint sensors, and sensors of whole body movements. Furthermore, because acceleration precedes displacement, the human brain senses motion cues before the visual cues that follow. These human motion sensors have low-motion thresholds below which no motion is sensed and this is important to the way that simulator motion platforms are programmed (and also explains why instruments are needs for safe cloud flying). In the real world, after conditioning to the particular environment (in this case aircraft motions), the brain is subconsciously used to receiving a motion cue before noticing the associated change in the visual scene. If motion cues are not present to back up the visual, some disorientation can result ("simulator sickness") due to the cue-mismatch compared to the real world.

In a motion-based simulator, after the initial acceleration, the platform movement is backed off so that the physical limits of the cylinders are not exceeded and the cylinders are then re-set to the neutral position ready for the next acceleration cue. The backing-off from the initial acceleration is carried out automatically through the simulator computer and is called the "washout phase". Carefully-designed "washout algorithms" are used to ensure that washout and the later re-set to about neutral is carried out below the human motion thresholds mentioned above and so is not sensed by the simulator crew, who just sense the initial acceleration. This process is called "acceleration-onset cueing" and fortunately matches the way the sensors of body motion work. This is why aircraft manoeuvre at, say, 300 knots, can be effectively simulated in a replica cabin that itself does not move except in a controlled way through its motion platform. These are the techniques that are used in civil Level D flight simulators and their military counterparts.