This is a picture of a VOR (I think this is in Albany, NY). 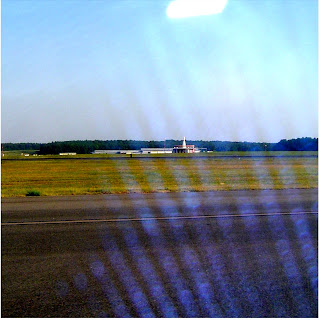 This is a little difficult to see because of the streaks from the polarized window on the airplane, but I thought it would be a good way to show what these things are that you see way out in the middle of the airport. 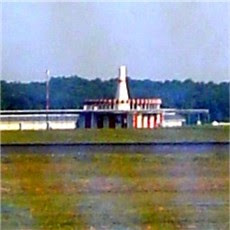 A VOR, short for VHF Omni-directional Radio Range, is a type of radio navigation system for aircraft. VORs broadcast a VHF radio composite signal including the station's morse code identifier (and sometimes a voice identifier), and data that allows the airborne receiving equipment to derive the magnetic bearing from the station to the aircraft (direction from the VOR station in relation to the earth's magnetic North). This line of position is called the "radial" in VOR parlance. The intersection of two radials from different VOR stations on a chart allows for a "fix" or specific position of the aircraft.


Developed from earlier Visual-Aural Range (VAR) systems the VOR was designed to provide 360 courses to and from the station selectable by the pilot. Early vacuum-tube transmitters with mechanically-rotated antennas were widely installed in the 1950s, and began to be replaced with fully solid-state units in the early 1960s. They became the major radio navigation system in the 1960s, when they took over from the older radio beacon and four-course (low/medium frequency range) system. Some of the older range stations survived, with the four-course directional features removed, as non-directional low or medium frequency radiobeacons (NDBs).


The VOR's major advantage is that the radio signal provides a reliable line (radial) to or from the station which can be selected and easily followed by the pilot. A worldwide network of "air highways", known in the US as Victor (for VHF) Airways (below 18,000 feet) and "jet routes" (at and above 18,000 feet), was set up linking the VORs and airports. An aircraft could follow a specific path from station to station by tuning the successive stations on the VOR receiver, and then either following the desired course on a Radio Magnetic Indicator, or setting it on a conventional VOR indicator (shown below) or a Horizontal Situation Indicator (HSI, a more sophisticated version of the VOR indicator) and keeping a course pointer centered on the display.


VORs also provided considerably greater accuracy and reliability than NDBs due to a combination of factors in their construction -- specifically, less course bending around terrain features and coastlines, and less interference from thunderstorms. Although VOR transmitters were more expensive to install and maintain (as was the airborne equipment, initially), today VOR has almost entirely replaced the low/medium frequency ranges and beacons in civilian aviation . . . and is now in the process of being supplanted by the Global Positioning System (GPS). Because of their VHF frequency, VOR stations rely on "line of sight" -- if the transmitting antenna could not be seen on a perfectly clear day from the receiving antenna, a useful signal would not be received. This limits VOR (and DME) range to the horizon -- or closer if mountains intervene. This means that an extensive network of stations is needed to provide reasonable coverage along main air routes. The VOR network is a significant cost in operating the current airway system, although the modern solid state transmitting equipment requires much less maintenance than the older units. Read more: http://en.wikipedia.org/wiki/VHF_omnidirectional_range