I know, I know. The reflection on the window made it tough to see.

The Answer is: Cape Cod! 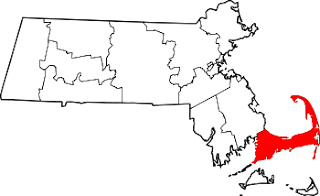 The Cape is an arm-shaped peninsula nearly coextensive with Barnstable County, Massachusetts and forming the easternmost portion of the state of Massachusetts, in the Northeastern United States. The Cape's small town character and beachfront brings heavy tourism during the summer months. http://en.wikipedia.org/wiki/Cape_Cod


Although the Cape was originally connected to the mainland, the Cape Cod Canal, which opened in 1914, effectively transformed Cape Cod into a large island. Three bridges span the canal from the Massachusetts mainland to the Cape. Vehicles can cross onto the Cape via the Sagamore Bridge and the Bourne Bridge; the other is a railroad bridge.