Greetings from Palm Beach, FL, where our airplane is undergoing maintenance... 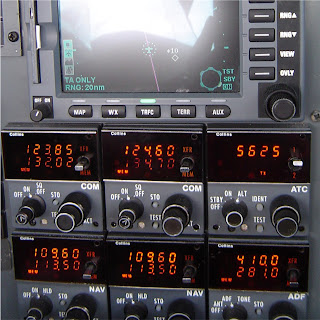 I told you in an early post that I was going to talk about the radios in the airplane. This is a pretty typical setup, so from Left to Right on the top row, we have 2 COM (communication), and the ATC (transponder) radios. On the bottom row, we have 2 NAV (navigation) radios and one ADF (NDB) radio.

There are only two places behind the decimal point shown, so even though we have selected 123.850 on COM1 (shown on the top line of the first radio), it only shows .85. The standby frequency (shown on the second row), is really 132.025, but we don't need to show the .005 to know this has been selected. This is because there is no .024 or .026, this selection could only be .025. Side note: because of bleedover on the frequencies-- we're running out of numbers for every ramp, ground, tower, approach, center, etc., frequencies--it has been discussed that we start assigning frequencies in between the .005. We could start hearing Air Traffic Control (ATC) assign a frequency of 132.027 or 119.054.

The silver oval you see to the left of 132.85 is a lever to switch the two frequencies. In other words, if we are talking to Cleveland Center on 123.85 and they ask us to change to Cleveland Approach on 132.02, we would dial this number in (using the large dial on the right) and then push the switch up, so that the approach frequency would now be the active one (jump to the top row). Pilots will hear a tone when this happens to let them know they've actually changed frequencies.

It's very embarrassing (but not uncommon) to have this happen:

AC123: "Switching to Approach, 132.02, AC 123, Good day." (You should always read back the frequency, just in case you didn't hear it correctly, or if ATC accidently gives you the wrong one).

So you dial in 132.02 push the switch up, and listen for a second, to make sure you're not going to interrupt another transmission.

Then you key the mike and say: "Aircraft 123, checking in, level 10,000 feet, information Zulu." (There are some other things to tell Approach when you first check in with them, like the ATIS, which I'll cover later).

Now, if you didn't notice that you didn't get a tone when you tried to switch frequencies, and therefore made your call on the last frequency, Cleveland Center would have advised you to make the switch. Some controllers with a sense of humor might say, "Flippy the switchy" or "That was a good practice. You're ready for the real thing --once you change frequencies."

This time you make sure the frequencies swap places and make the call again so you get this response:

Approach: "Roger, AC123, descend to 8000." When ATC contacts you with your call sign, they are saying they have you on their radar.

The second COM radio is there so you can continue to communicate with the ATC that is following you on radar while at the same time tune in frequencies to do things like listen to weather at the destination airport (that Information Zulu I mentioned), or monitor traffic at that airport, or call ahead to the FBO (Fixed Base Operations were discussed in an earlier post) to let them know you're coming. Federal Regulations tell us that in-flight, if we have no other need for this second COM radio, to monitor (listen, but don't talk) on 121.5 (Guard) to hear emergency transmissions. This was instituted post-9/11, so ATC could make broadcasts of issues pilots needed to know. It is also used by the military to contact you if you're getting intercepted, or by pilots in distress.

Gosh, I always want to cover just one topic, but everything leads into something else. I will talk more about the other radios next time, but if you have any questions on anything I bring up, just let me know.