Just yesterday, low ceilings at my destination made me postpone my flight to the Atlanta area. While within minimums, the reduced visibility wasn’t ideal for pilotage. Instead, I practised rudder cross control in prep for aerobatic and backcountry flying. As pilots in training, we learn lots about the person who instructs us month after month in the cockpit. Sometimes the conversations at cruising altitude are pop tests of situational awareness, other times friendly conversations, stories, and dreams (yesterday it was reminiscing about grad school days in a band). 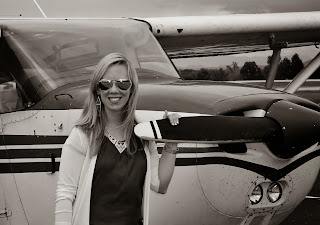 After I flew him around an adjacent city polishing checkride maneuvers, landed a no flaps-power off-emergency landing, and locked the aircraft, my instructor Harrison enquired into my involvement with Girls With Wings as we walked across the tarmac to the terminal. Now, he’s trained and learnt from countless women pilots in his life, and we discussed some of the ways we can encourage anyone with an interest in flying. Harrison then made my day by saying “Well, you know, I’m your biggest fan.” He approaches my professional flying dreams as not only possible, but ones that to work on right now, and it’s something to keep in mind as we find ourselves mentoring others. Harrison began flying at the same age as me —28—and his experience in teaching is backed by work flying backcountry Alaska, practical military instruction, a patient demeanour, and solid dedication to his students’ success. As a college-level instructor myself, Harrison’s talent for teaching aviation improves my adeptness not only as a pilot but also as an academic and educator.

Recently, the Aircraft Owners and Pilots Association (AOPA) has increased their coverage of flying clubs, promoting their benefits to pilots including gaining and maintaining proficiency, becoming comfortable with aircraft insurance, maintenance and ownership, bonding with other pilots, and serving the community through endeavours like Pilots N Paws (Our Clemson-Oconee airport crew even fosters pets, socialising them and getting them ready for adoption. Little kitten meows for attention while a mechanic tinkers with a plane are downright adorable. No pilot can resist!) Air Facts Journal recognised Clemson University Flying Club as the oldest flying club in the nation. I’m very proud to fly for CUFC as one of only a couple women – could not have had a better foundation for my training in natural resource aviation and relief efforts through flying.

The privilege of being named a mentor for Girls With Wings has opened more doors and formed more friendships and cooperations already than I had ever anticipated! In the 2 months since being awarded a flight scholarship, my training has progressed quickly and I am nearing preparation for my FAA checkride to be able to carry passengers! I have soloed the airplane, flown unsupervised solos from start-up to shut-down, and planned and executed cross-country flights to neighbouring states. Most noticeably, I’ve become very comfortable in the air, able to read my aircraft and confidently aviate, navigate, and communicate. This is perhaps the most satisfying feeling after so much sacrifice and investment, and it creates a place in my soul that will always be in the air. A poem that resonates in the hearts of most pilots is High Flight, and it is one that I hope is read when one day I pass from this world to the Kingdom of Heaven to be with the Lord:

Oh! I have slipped the surly bonds of earth
And danced the skies on laughter-silvered wings;
Sunward I've climbed, and joined the tumbling mirth
Of sun-split clouds - and done a hundred things
You have not dreamed of - wheeled and soared and swung
High in the sunlit silence. Hov'ring there
I've chased the shouting wind along, and flung
My eager craft through footless halls of air.
Up, up the long delirious, burning blue,
I've topped the windswept heights with easy grace
Where never lark, or even eagle flew -
And, while with silent lifting mind I've trod
The high untrespassed sanctity of space,
Put out my hand and touched the face of God.

Aviation and the free perspective it affords I will pursue and share with others—especially women and children—for the rest of my life.

Please know that you can contact me at any time through email at kkanapec-at-gmail.com or via my LinkedIn profile http://www.linkedin.com/in/kimberlylkanapeckas.

I truly look forward to updating everyone on my checkride and passenger flights soon.

Blue skies and favourable winds to all!

We are big fans of you as well, Kimberly, but that had to have meant a lot coming from a CFI you respect. Thanks for keeping us inspired with your essays and we look forward to hearing of your future accomplishments!