Amber was the recipient of our Spring Scholarship - we've given away fourteen thus far! And we will be awarding more for the summer. Stay tuned to this blog for the announcements, coming soon.

“A Lot Can Happen in a Month I Tell Ya!”
Flat tires, The American Flag, and Wonderful People

Ah, my final journal entry for the GWW 2013 Spring Scholarship, but definitely not my last. Since I started writing these small informative essays of myself, learning something a lot of have gone through already and some that have not, I’ve realized I’m thankful for doing so. Not only am I going to remind myself of the odd, but fun things that happened in training but others can also see how training may or may not go. 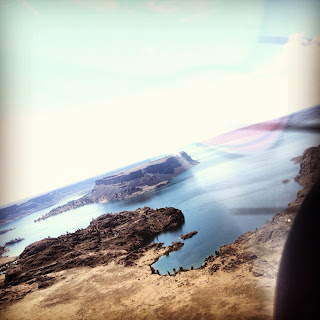 Since the last essay, so much has happened and needless to say I wasn’t prepared for the majority of it or the fact I really wanted to be out on the lake with friends instead of studying in a basement where it’s cool and doesn’t remind me of the outdoors which I’d much rather be in. But a determined mindset and headstrong approach I’m nearing the end of certainly a new beginning.

A few weeks ago I was able to steal the plane after work on short notice. I had also scheduled (on accident) the next morning to fly before work. Apparently 4-6pm one day wasn’t enough so I scheduled 4-6 AM the following day!! Goodness… and someone had already blocked the plane out for after work so I had to stick to my accidental, but thankful, scheduling in the morning…. The afternoon temperatures of 95 degrees made a morning flight more appealing anyways.

July 1, 2013
Since I hadn’t flown for nearly a month straight, I’d thought I’d see if my instructor was available. He was, we flew for a bit, I did great, like it didn’t seem a month ago since I was in the air last.

As we were taxiing back to the hangar on the South end of the airport from the North end we were joking how hot it was and maybe we’d lose a pound or two with this heat and no air-conditioning in the 172. Everything was grand and I was excited to fly the next morning early in prep for my Second Solo Cross Country in the following week.

As we were crossing the highly warn out painted compass at our airport (I’ll get to that later) I felt a loss in turning the plane right…. No movement with full breaking on the right rudder. I honestly thought my instructor was testing me by holding his foot on it. He wasn’t…. Then, that flat tire feeling, like thump thumpity thump…. He said his tire was fine on his side, as was mine on the pilot’s side…. Dang you front landing gear….It’s hot out, not this!! It was almost 7 p.m. and we had both worked all day already.

We jumped out to assess the damage. Thank goodness it didn’t happen on the many touch and goes earlier. My instructor pushed the horizontal down as I checked the front tire. No apparent holes, gouges, obvious pin holes at all. Weird. So next step, we had to get her back to the hangar.

Pushing the plane back with a flat seemed an interesting challenge but it wasn’t going to stop us. There was no one around to help and we certainly didn’t want to bug anyone around 7 at night, as most are relaxing and enjoying dinner around then.

We slowly but surely got the plane back after learning what worked and didn’t work with a stubborn flat. We pulled an air compressor out and aired the tire up….tried to air the tire up, and just as soon as air went in, it came right back out again. Well fine.. Into the hangar you go Lu. (part of her tail numbers, so we call her LU)

Guess I wasn’t flying the next morning…… early. I was okay with it as that experience was definitely a work out to say the least. The plane was fixed in about 2 days and ready to go again. 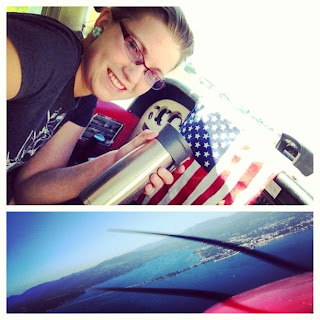 Family was in town and friends had BBQ’s going all weekend. I had 4 days off and was determined to get solo flying accomplished in the mornings and spend social time in the afternoons while doing bookwork in between.

I decided to stay in town over the Fourth and practice maneuvers and touch and goes while the parade was going on in our cute little town. Later, I had friends ask if that was me up in the sky, and I replied with a “you betcha!” I also decided to take a little American flag up with me to be thankful for all the men and women who have served to protect our freedoms such as myself doing exactly what I wanted…. Flying with the birds. 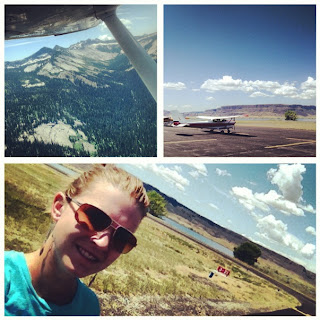 My instructor said I should check out the Grand Coulee Dam….from the air. I had just gone there for the first time a few weeks earlier on a quick road trip to Seattle and back to Idaho. He said it’s on the water and before he finished I said I’m going!

I had to head North and get fuel, since it was cheaper and why not spend less to fly more?! I got in after preflight and planning and turned my master and avionics on. Now to check weather…….weather not working. I knew which runway to fly out on because traffic was using the bumpy/drafty, in the air, runway 19. I was more concerned with coming back as Sandpoint tends to be a bit gusty and I would like to know this info.

I was at the end of the taxi way doing my run ups and a Quest KODIAK pulled up behind me to depart as well. I work at Quest Aircraft. I doubt the owner of that plane knew that I worked on it previously and I was bit jealous he was taking off in a plane I had previously loaded my dirt bike in for a Plane and Pilot Magazine article. But I carried on and departed north after daydreaming for a second. 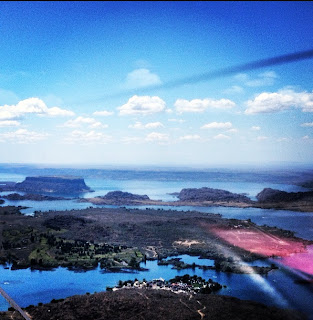 I landed and pumped my fuel. Should have used the ladder available but instead tried to be graceful getting on the strut and fueling that way. Next time, ladder will be my friend.

As I departed West, I was feeling a little iffy going over the Selkirk mountains but as soon as I flew over the Roman Nose Lakes I started to calm down a bit. I had been there, on land, but I knew where I was at. I kept heading west singing to myself since there wasn’t radio to tune into.

I started to go over stuff so I was prepared for this new airport/area. I had done so in planning but time to do it again. . . . Right hand traffic pattern. But I’m used to left hand…. Now it’s easy to say just do a right hand pattern for 21 runway, but to actually have to engage, your brain wants to lock up on something so simple but yet so different than routine. I could have done a left hand into runway 3 but wanted to try another direction since winds were clearly calm and no other traffic, so why not?! It wasn’t hard to accomplish but a mini brain workout if you will.

After landing on this peninsula like, chunk of land, I thought this is great! Should have brought my swimsuit and joined the boaters teasing me going by on the Lake Roosevelt Recreation area. I stopped for a few minutes just enough to realize no one around, probably because they were out on the lake instead of a warm airport. So I decided to head back to the much cooler mountains of Idaho.

Later on into July 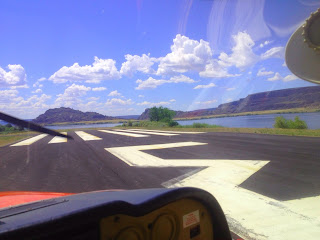 Earlier when I had mentioned the faded painted compass at our local airport during my flat tire, it got me thinking of an organization I’m apart of, The 99’s- International Organization of Women Pilots. I’ve wanted to attend meetings but really am focusing on finishing up and getting my Private Pilot License as soon as possible. I would love to help repaint the compass eventually but I don’t want to overdo things and let goals slide but I can still focus on the 99’s when I’m finished. I get newsletters and am apart of their blog, both nationally and kind of locally. I live far from events that go on so internet is my best approach to reaching others right now. I also can’t wait to help show my neighborhood what Girls with Wings is and what an outstanding group of women aviators they are as well as great role models for young ones.

The other day I received an email which soon was followed by a phone call later by an elderly woman in Sandpoint that is a local 99 member. I looked her up when I found out her name and learned she received her private pilot license at 79…..!!!! That is wonderful. I gave her a call back and we spoke for a bit. We were instant friends and talked as if we knew each other for years. I can not wait to learn things from her…. (She wants us to go up in her Cherokee and go on cross country together). She’s excited to teach me the ropes on her low wing Piper and I can not honestly wait. She understands that I want to finish up and get done soon and said give her a call when I’m ready.

The people you meet in this field are few and far between. The instant friendships that are evolved from an engaging interest absolutely amaze me. I cannot wait until I can offer assistance to any of these organizations from the experience and the thoughtful, encouraging words from so many that have helped pushed me more than I could ever imagine.

I passed my written test.

I studied and studied while friends eagerly and teasingly invited me out on the lake as I had to sit inside to get ready for a test that I had to take the day off work to accomplish. I even kicked my boyfriend out this past weekend (not that he minded) so he could enjoy this awesome weather with friends. I had to pass for many reasons. But getting a better score than my many, and I mean many, practice tests showed working all weekend for this just puts me that much closer to finishing.

Congratulations, Amber! You have made all of us Girls With Wings very proud. And if we had an award for best essay writer/picture submitter ever, you would certainly clinch that prize as well! Thank you for showing such enthusiasm for your training and being a GWW role model by sharing your experiences with us.  Please keep us posted!!  - Lynda