You call this work?

I have just returned from a Women in Aviation Day at the Evergreen Aviation and Space Museum in McMinneville, Oregon, and I must say, I had so much fun! One of the things that I emphasize during my career day presentations at high schools is that people have to get involved in a career that they enjoy or they’ll only be happy twice a month (almost everyone knows this is the frequency with which one gets a paycheck). What you do has do bring you joy, and my professional pilot career (mostly) and my public speaking career (always) does exactly that. In fact, someone asked me while I was there how my vacation was going, and I hesitated to reply that it was, in fact, a business trip. How can you call sparking an interest in aviation “work?”

A little background. I “met” Erin Willison, the Education Coordinator for the museum via email months when she asked me if I would be interested in coming to the museum. I was, but Oregon is close to Ohio in the alphabet only, and the likelihood of my making it out there without sponsorship was pretty remote. But then I got to meet Erin in person at the Women in Aviation Conference in Reno this year and a fast friendship was formed along with concrete plans for my appearance at the museum. 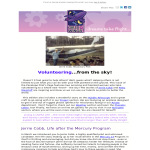 I’ll admit, I did spend the first morning in Oregon learning about the many programs the museum had to offer and meeting the wonderful staff of the education department headed by Matt Van Dixon. The afternoon I spent attending an IMAX presentation of the Hubble telescope (coincidentally, the recent issue of Penelope’s Page features Hubble). Now I’m more of an aviation person than a space person, but this 3D documentary on a Space Shuttle trip to repair Hubble might have just tapped a previously unknown interest (too late, of course, since the Space Shuttle program is being discontinued). 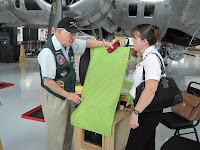 I also took time to visit all of the numerous aircraft in the two huge buildings of the museum (the IMAX is housed separately, as is the soon to open Waterpark). The docents here were great, offering many hidden gems of information since in many cases they themselves had actually flown the aircraft! For example, I had the chance to talk to Russell Barney, who was a crewmember on the B17 during WWII. The B17, btw, was called the Flying Fortress in recognition of its ability to withstand an incredible amount of damage and still sustain flight. A website with some unbelievable photos.

I also learned that the Ford Tri-Motor used to carry bags in the wings – which is now where most airplanes carry fuel.

The evening was spent preparing documents for the Girl Scouts arriving the next day, including a scavenger hunt featuring references to women within the exhibits, most notably Elinor Smith and Katherine Wright. In addition, the staff had prepared special signs of women in aviation on easels to be placed throughout the museum. The local 99s organization generously donated gift certificates to the gift shop for successful completion of the assignment.

Don't know who Katherine Wright is, or perhaps her importance to the legacy of the family name? Listen to this story to find out more.

Saturday was the actual event, and my tables were parked under the unbelievable Spruce Goose, a multimillion dollar wooden (yes, wooden) cargo plane built by none other than Howard Hughes in order to transport military supplies by air since the shipping lines were fraught with German submarines that sunk any ships trying to resupply troops during WWII. I got a tour of this HUGE airplane from none other than the man himself. p.s. Just between you and me, he said he never flew it after the initial low level (and I do mean low) test flight because it scared him. Apparently the thing creaked and groaned like an old barn. The guy sitting in the tail could see sky through the seams. There were also guys sitting in each wing pointing fire extinguishers at the fuel tanks. Somehow I think I'd have been a bit scared, too.

The museum was still open to the public as well as the Girl Scouts which I loved because when there weren’t girls in green there were people just curious about what I was doing there in my uniform with a table full of charts, cockpit posters and airplane models to teach girls “everything” they needed to know to be a pilot. I even had a 3 year old girl stop by who insisted to her parents she was going to be a pilot. I pointed out things on the VFR sectional and after about three minutes she announced, “Ok, thank you very much,” and walked away. Frankly I’m surprised she lasted that long. Her parents did get her an autographed copy of the Penelope Pilot book to sustain her interest.

Well, it was a completely exhausting day all around, and we called it a night pretty early. The next day we had plans to meet up with Kam, the 2009 Girls With Wings Scholarship Winner and her two daughters, India and Hero. We met initially at the Saturday Market (Even though it was Sunday) in downtown Portland, had lunch, and then ventured to Multnoma Falls about ½ hr outside of the city. The path up to the top of the falls was steep and rugged, but 8 year old India tackled it like a champ (I was just as impressed with Kam, who climbed with 4 year old Hero on her back).

But, as all good things must come to an end, it was time for me to return to Texas and resume my flight training. I am newly resolved to attack those books as too soon I have to drive back to Ohio for a resupply as I have another speaking engagement, this time to my sister’s school (she’s a Japanese teacher) in Wisconsin. It will then be time to travel to Minnesota for Aviation Inspiration Day, my joint venture with the Commemorative Air Force – MN Wing to give girls the Girls With Wings presentation followed by museum tours and Young Eagles Flights! Again, provided via sponsorship and donations and the willingness of many volunteers to put together a great event. 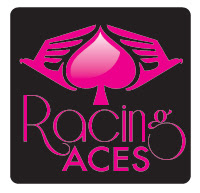 Within a couple of weeks I will be piloting a chase airplane for The Racing Aces for the AirRace Classic and before I know it, Oshkosh will be here again. But, like I said, if this is work, it appears I like working. All of the effort I’ve put into Girls With Wings has taken a lot out of me, not only financially, but in time and effort. But the way I look at it, especially in light of the upcoming Mother’s Day holiday, what I am not spending on my own children is attempting to help so many others make their dreams take flight!

By the way, if you would like to have me speak to your group or do the GWW presentation, please contact me for further details.