Last Saturday, May 28th, was the first ever Aviation Inspiration Day - a joint effort between Girls With Wings, Inc., and the Commemorative Air Force - Minnesota Wing, led by Squadron Commander Col. Amy Lauria. Amy and I had talked at EAA Airventure in Oshkosh about "someday" coordinating an event at the CAF museum and we finally just looked at our respective calendars to chose the day that would work for both of us (which is often the hardest part of getting such things going). That day just happened to be the first day of a long holiday weekend. Would the twin cities of Minneapolis and St. Paul be deserted of residents fleeing for vacation destinations?

It turned out that we shouldn't have worried about the turnout (ok, it was mostly me who was worried). I mean, I had less success than Dave Sniadak of Axiom Marketing who did an outstanding job getting news outlets to promote the event. He found local newstations and papers willing to cover this day-long event for families to explore and enjoy aviation activities. The clincher? We were additionally offering four sessions of the hugely successful Girls With Wings presentation. I myself was able to get a couple of aviation newsletters to carry advance notice of the event but fewer than I might have hoped. After all, the feedback that I had been getting from aviation organizations that try to put on large events for kids is that they get a much larger turnout from the boys. Now here was an event specifically to attract the girls.... Were we tilting at windmills here? 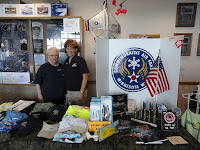 We also offered space to other organizations involved in promoting Science, Technology, Engineering and Mathematics (STEM) opportunities by having tables with their information. We were happy to see the MN Wing of the Civil Air Patrol there promoting their activities as well as the Young Rembrandts offering drawing lessons with an aviation theme to the kids. Where were the other aviation organizations? Where were the schools, the clubs, anyone else interested in getting a larger audience of girls into their group? Here we were, offering an opportunity to reach out to more girls... had they given up? Am I wrong in the mission of my organization? Is there no interest in aviation from girls? Was I going to show up Saturday morning and only see a few stragglers at the airport? 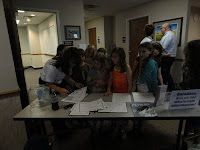 The terminal building at Fleming Field started filling up at 8:30am with eager families wanting to get their girls into the first GWW presentation at 9 am for girls 1st thru 4th grade. Many of the folks had taken us up on the pre-registration option online for the presentation to provide priority seating for the follow-on Young Eagles flights - yes, that's right. The presentation has been awesome on its own, but this time, the girls "graduated" from the session with their Pilot Certificate which they walked over to the EAA Chapter 1229 table to sign up for their free airplane ride. What a great opportunity for the girls to put into practice what they'd learned. Said one of the YE pilots, "it was the first time that I saw the majority of the girls not there just because they were dragged along with a brother. They were all eager and clamoring for their chance at the controls. It was great to see such self-confidence in the girls." We had two sessions each  for 1 - 4 grades and for 5 - 8 grades and with the walk-ins, we far exceeded our expectations for attendance. 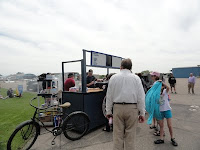 The weather was definitely conducive to flying, the first warm sunny day the area had seen for a while. Well, at least til about 2pm when the skies darkened and the torrential downpour began.  In fact it was so nice we had a tough time deciding whether to drag folks back inside for our speaker series. After all, we had hamburgers and hotdogs, chips and drinks provided courtesy of Wipaire, Inc., a manufacturer of airplane floats, and people were strolling around looking at the different aircraft on display. We even had the Lifelink III helicopter! I spent the time getting feedback from the parents. Most were surprised, based on the size of the crowd, that this was our first such event. Other parents told me that they were thrilled at the educational nature of the event, because it incorporated STEM - Science, Technology, Engineering and Math, in such a fun way. But people did want to sit and listen to the different speakers: me and Amy from CAF-MN; Melissa, an Air Force mechanic, Carrie, an Air Traffic Controller, and Lydia, a CAP officer. 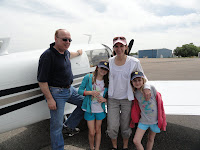 There was a lot going on for all of the families - yes, people brought their boys too, though the GWW presentation was the only thing just for girls. The boys, too, got rides on the vintage fire truck, WWII vehicles and the aircraft and took part in all of the other activities. In fact, I am so glad we'd built in time to have rest breaks - breaks between the sessions, breaks for the YE pilots, etc., there were so many people there that our few volunteers, to include Amy's husband, Jim, Don, a cadet from the CAF, Linda, who ran the CAF PX, Kjersti, a local 99, and the many CAP members (Oh, and the cooks, too!). We also dragged my brother out, and of course my dad is always on board with helping out. At a post-event dinner, the principal players all decided: 1. We definitely had over 250 attendees. 2. We are definitely going to it again next year. And believe it or not, on the same weekend. Mostly because in Minnesota there's no telling what the weather will be like; probably the last weekend in May likely will be the first one without some chance of snow and frost. But we don't want to wait until too late, because of the end of the school year and less of a chance of making folks aware of the next Aviation Inspiration day.

[BTW, I had a heck of a time getting the word out to the schools. Liability issues, I think, but if any of you have resources in these schools, we'll need you for next year!] 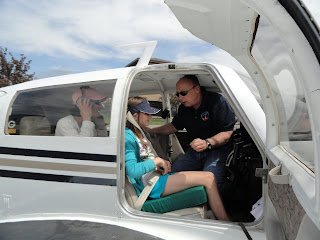 All in all, I would definitely check the "success" box for the first Aviation Inspiration Day and we are looking forward to doing another Aviation Inspiration Day at Fleming Field next year. I am also interested in doing more of these events at other locations so ...... If you are a highly motivated individual (like Amy Lauria) with access to a list of contacts within your area, well connected to a local airport, with a nice terminal or other available building, perhaps a museum and facilities on the field that can give tours, and enthusiastic organizations that would like to participate, please contact me. We can talk dates and about sponsorship, promotion, budgeting, etc., so that these events can keep getting bigger and better. And maybe, as I have said from the beginning, put Girls With Wings out of business .... when people wonder why there would have ever been a need to have an organization to encourage more girls to have an interest in aviation.