Today I fed a camel a bottle 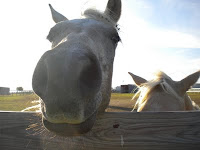 Pinch me. Ouch. Okay, okay. I know this isn’t my life that I’m living right now, just someone who is sharing hers with me. For me it is so far removed from my normal existence it is kind of like a dream.

At the end of March I made what I considered my “last ditch” effort at getting my CFI rating. I know, I know, I’ve been working on this for months --- Remember, back in late 2009, early 2010, I had aspirations of having my CFI, CFII, MEI, and heck, even my helicopter instructor ratings by now? Ha. Life, unfortunately, kept getting in the way. So did weather. 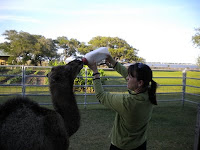 As did reality. I will blog shortly with that whole story, but I wanted to update you with what’s going on right now. Only because I can more put it into context now that I’ve had a year’s experience with General Aviation (GA). Or, at least, six months. This next month is going to be an immersion effort. So now that I’m on my very last LAST ditch effort, I hope to share with you a bit more about it now that I’m gaining familiarity with GA. I got to see a whole ‘nother side to GA today. Seriously. A week ago today I was recovering from my long drive back from Florida, where I attended Sun n Fun. A day later I got a phone call from Dianna Stanger, a Girls With Wings role model featured in this month’s newsletter.

A lot of the bios I get for the website are for women I’ve never met, including Dianna. She wrote a great bio (you should read it!), but we’ve only communicated via email and a few phone calls as she has promoted GWW at her events introducing people in the community (especially kids) to aviation. Recently she introduced 98 girls and women to flying in her Eurocopter EC120 and won the “Most Dedicated Female Pilot in the World” title in the 2011 Women Of Aviation Worldwide Week.

BTW I’m meeting her friend Jasmine tomorrow. She invited volunteers of local non-profit organizations to come to the airport for a flight. She won the “Most Creative Aviation Advocate” title from WOAW. We’re going to work on getting sponsors for the Racing Aces, the AirRace Classic team Dianna has formed to help raise money for Girls With Wings.

Back to the phone call. Dianna asked me if I was able to complete my CFI, as I had sworn to do before I left Alabama and Florida to come back to Cleveland. No, I hadn’t, and looking at Cleveland's 10 day weather forecast for practicing what I had learned in Jasper, AL, did not look encouraging. Rain, more rain, and for a change of pace, thunderstorms. So, she made me an offer I couldn’t refuse.

“Come down here (to Port Lavaca, TX) and I give you a place to stay. You can fly my airplanes, teach at my flight school (with that brand new Advanced Ground Instructor certificate in my pocket) and get that CFI knocked out.” I was literally speechless.

I called my friend Sara in Alabama, who had been teaching me at her flight school and who I had expected to go back to. She said, “Do it, girl! You know the maneuvers (she and her husband Glen taught me well); all you need to do is get out there and practice them! And the best way to learn that CFI stuff is to teach it! What a great opportunity!” Sara talks in exclamation points, especially about aviation.

All I needed to do, in a few days time, was to prepare myself to leave town for a month. Not easy when you’ve just been gone for more than two weeks, and have a small business to run. Besides rescheduling pretty much the whole month of April (and some of May), I had a day long Girl Scout/NASA event to attend. And a car to unpack and repack. And two cats who I will miss terribly needed a home. But I made it happen. Two loooong driving days later… 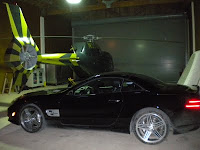 I show up at the Wolf Point Ranch. I had received instructions on how to enter the ranch and park in their garage, but it still came as a surprise when I pulled up to a hangar and pulled in behind a sweet Benz, which was parked behind said Eurocopter mentioned above. Any doubts I might have had about this being a “real deal” quickly evaporated. My place to stay is an apartment in the hangar with a full gym next door (I’ve been needing an excuse to get back into shape).

This morning I met Dianna and her husband Al for a walk. For the record, their two Giant Schnauzers make horrible guard dogs. We strolled past their newest camel (they have three), the rabbit cages and the Watusi Cattle, sheep and horses. Lots and lots of horses. This is an amazing place to stroll around in the early morning hours.

The walk was nice, but it was even better when Dianna told me to meet her in an hour on the helicopter pad. She ran her errands today. In. Her. Helicopter. Being a helicopter pilot myself, I was amazed at how fast the before start checklist was on this thing. The blades were turning within a couple of minutes. The interior hardly resembled the Huey I was used to. Heck, Dianna was wearing white shorts and sandals so I had a feeling this was not going to be reliving my Viet-Nam-era-aircraft-flying, army-green-nomex-flight-suit-wearing experience. It was a beautiful day for flying.

First we flew to the airport, KPVK. She had ordered wheel pants for the Husky she’s flying in the AirRace Classic which we were picking up to fly over to her mechanic. But first I met the crowd, including Eric, my new flight instructor. I also got a peek at her WACO and her Premier. Yes, hers. And a really sweet Airstream Camper that she had customized for her when she did her horse shows (well, I'm into camping, too, you know!). At this point, I don’t care who you are. You can play it as cool as you want but you, even you, would be green with envy at this point.

We got back in the helicopter and flew across to the mechanic’s place. He’s got a 2600 foot grass strip where he hosts fly-ins every summer and restores Stearmans (I have a not so secret goal of getting rides in ALL of these other aircraft before I leave). Here I saw Dianna’s Husky with its amazing panel. I've seen jets without all of these toys. And this is a taildragger! Fellow racers: you should be nervous. Dianna aims to win. I’ve only just met her and she seems the determined kind.

Then we flew on over for lunch. Embarrassed, I told Dianna that I hadn’t brought my wallet for us to eat out, but she said if we ate at the Shellfish that would be ok. As we approached the restaurant, she said “our” restaurant. Yup. Our. We landed right outside the parking lot, and again, I don’t care who you are. You get out of a HELICOPTER and walk toward a restaurant with a crowd on the deck watching your arrival and not strut your stuff. Go ahead, just try. As one of the observers remarked, “THAT’S the way to make an entrance.”

And we flew back to the ranch. I was SO impressed with that helicopter. And Dianna’s flying skills. [She flies that helicopter with a comfort level similar to that which most folks drive cars.] And especially her generosity. Part of my deal with her is that I’ll be flying discovery flights for her – which I am so excited about. This is my chance to totally immerse myself in General Aviation. It’s sometimes hard for folks to understand that I have gone from the military to the airlines with so little exposure to flight schools, and flying for fun, flying different aircraft and introducing people to aviation – by flying them – that I expect this to be an amazing month. And challenging. I’ve still got a lot to learn. And a checkride to take!