The next day I went out to practice my Chandelles and Lazy 8s myself. These two maneuvers are at the commercial pilot (as opposed to the private pilot) level. I found some great resources on the AOPA website:
Chandelles In 60 Minutes: An Easy Way To Learn.

The Chandelle article starts out:


First understand that any complex maneuver must be broken down into simpler elements. Do each part in sequence, and then combine the parts into the whole. Step one: Have your student fly a 360-degree turn with a very shallow bank. Start with 10 degrees. Vary altitude around the turn very slightly, always returning to level. Vary the bank slightly, say increasing by 10 degrees, then decreasing by 10 degrees. The purpose of this exercise is to tune up bank and altitude control. You will be surprised by how much improvement you will witness in the way your student flies straight and level and performs turns. Coordination improves sharply. Don't knock it; try it.

The Lazy Eight one (In Five Easy Steps) is very similar.

These articles were very very helpful, though I got close to the full Chandelle maneuver, I didn’t get quite there (just above stall speed). However, as the article states, my flying skills got much MUCH better. Why are these maneuvers so tricky? Well, depends on how you’re taught. The first instructor I had trying to teach me to become a CFI had a preflight briefing that went pretty much like this: “Ready to go fly?” I’m a pretty visual person and in my informal poll find that a lot of other people feel they are too. I like to have an idea of what I’m going to do before I am up in the air trying to simultaneously keep the greasy side down while trying to figure out how to fly a maneuver. Especially when you're just starting out.

In fact, the day this instructor and I went out to do slow flight and stalls with me sitting in the right seat for the first time I almost cried I was SO frustrated. Yes, I’d been sitting in the right seat in the jet, but to be in a single engine airplane doing unfamiliar maneuvers, and then, oh, yeah, there are no gauges on my side so I also had to look left which delayed my scan... Arggh. I swore right then that was going to be the last time I flew with that guy. I had had an amazing revelation of how easily it would be to convince a student never to return to any kind of flying lesson again, he or she thinking they were incapable of learning to fly.

Later in my training I even thought I had this maneuver “down” when I knew to look out the right window, spot a visual reference, honk back on the yoke while banking, climb and somehow end up with that visual reference out of the left window. Yet I still didn’t really know what I was doing and the how’s of the maneuver don’t stick with you without the why’s. You can read about something in a book but your mind won’t develop the correct picture without some kind of reference. For example, instructors often have airplane models so they can give students a “big picture” view of what the airplane is doing while still in the classroom. Here’s a video of what a chandelle looks like from the outside.


CFI Note: The Aviation Instructor’s Handbook calls this the Cognitive Stage. The student carries out memorized steps , unaware of progress, fixating on one aspect of performance. The best way to prepare the student to perform a task is to provide a clear, step by step example….

Luckily, my flight instructors at Shoreline Aviation in Alabama were all about explaining things on the ground in a systematic way BEFORE we ever got into the airplane. For every maneuver there was 1. Safety: usually Clearing turns; picking an altitude/place/heading; mixture rich and gas on both. 2. Configuration: Airspeed and Flap position. 3. Execution: Bank, pitch, etc. 4. Recovery: Change pitch, bank, and/or add power (and right rudder!), rollout on heading, altitude, etc. If you can run through those steps in your mind, or even better, out loud (Sara, the instructor, calls this “singing.”).

Like I said, it also helps to know the why, and I was originally told that the chandelle was an escape maneuver in a dog fight. The idea is to reverse direction and gain altitude over someone chasing you in the shortest time and area. Later people have said it’s a good maneuver to know if you plan to fly into canyons. Many a reckless pilot has found himself face to face with a canyon wall and been unable to turn and climb out in time, with unfortunate consequences. Plus, it’s just a great coordination exercise. 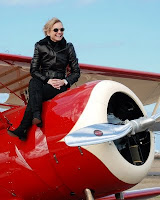 I actually got to practice the Chandelles again the next day, except with a passenger. The background: on Saturday we had planned an “air to air” photography shoot. Actually, we’re trying to get a video of Dianna, the owner of the Calhoun Air Center, in her Waco for her upcoming article in Airplanista. Jasmine and I had received a Contour GPS camera to record her exploits in the AirRace Classic (go Racing Aces!) and so we mounted this camera to the dash of the 172 directed out to the front of the airplane. We also had a Hero Cam – often mounted on the helmet of crazy all terrain bike riders, mounted on the inside of the front windscreen to film Jasmine and I. Since neither of us had worked with cameras like this, we needed the test flight to see what would actually show up on film, uh, card.

This was so great in so many ways. Yes, we figured out the cameras, but since we recorded the whole thing, I actually watch my first “flight lesson.” I talked Jasmine – not a pilot – through most everything we were doing in the traffic patterns, answering her questions, too. But we also went out to go fly and get some footage from altitude. So I gave her the controls, and talked her through basic flying skills. I hadn’t planned on doing this, so I was a bit disorganized, but she did amazingly well. We worked on some turns, and I tried to show her the piece of pizza – the angle between the dash and the horizon. Bigger piece, larger bank. Then we did some climbs and descents. She only screamed, and only slightly, a few times because of the bumps. She also completely did not understand what the wind was doing to her, so every time we got bounced around she thought she had done something wrong. A very important lesson in talking about these things before you ever get up in the air with a student: the effects of the wind.

I also noticed, watching the video after wards that I use a lot of confusing terms (the Contour Camera records audio too). I spoke about changing power settings about five different ways. Sometimes I said “level out” meaning stop turning, sometimes I said it when I meant stop climbing. Jasmine also appreciated watching the video, because her relationship to the horizon was so much more obvious. At one point I had gone from 30' of bank, to 20, to 10, and she really got it back on the ground (again, because she wasn't trying so hard to keep the greasy side down at the same time).

When Jasmine had had enough flying, she read those instructions in the articles on the maneuvers to me, and was quick to point out my altitude fluctuations. I was quicker to point out it was obviously due to thermals. ;-)