Can you hear me? 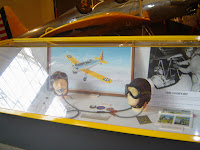 This is another picture that I took in the San Diego Air and Space Museum. It is a picture of a Gosport Tube. As you can see the tube goes from the mouth of the instructor to the ears of the student in the old days of open cockpits (and before avionics with mikes and headsets).

I had trouble finding information on the web about it, other than the Wikipedia definition of a speaking tube: "A speaking tube or voicepipe is a device based around two cones connected by an air pipe through which speech can be transmitted over an extended distance. While its most common use was in intra-ship communications, the principle was also used in fine homes and offices of the 19th century, as well as fine automobiles, military aircraft, and even locomotives. For most purposes, the device was outmoded by the telephone and its widespread adoption. This device was also known as a "megaphone", but that use has since become superseded."

Interestingly enough, you still see this tube in use today (or at least recently enough): "...on certain playground equipment, which employ tubing connecting soundhorns or other speaking boxes to allow voices to travel to separate points, for the amusement of the children. [1] A similar device, often used by children at play, is the tin can telephone, which consists of two tin cans open at one end connected by string tied into the closed end of each can. When the cans are pulled apart so that the string is held tight, even a softly spoken voice can be heard clearly over a considerable distance."

I did find a few sites that referred to it's use, like this memoir on http://www.gulfcoastwing.org/basehap.htm, a website is dedicated to the men and women of the Gulf Coast Wing and the Tora! Tora! Tora! group who volunteer their hard work and sacrifice to keep the Confederate Air Force aircraft flying.

One incident I remember in particular. Once, before I soloed, he had me practicing landings at an auxiliary gravel field. On one trial, proceeding downwind the wind-sock changed so I would not be able to make a touch and go as we usually did. He told me over the gosport tube to go ahead and land anyway and we would have to taxi back for the other take off and landing. This field did not have runways. Explanation: The gosport tube was a funnel hooked to a tube in the front cockpit where he sat, then back to the cadet's helmet ear pads in the rear cockpit. The instructor used this method to communicate with the cadet (mostly cuss him out), but the cadet had no way of answering back. After we rolled to a stop, I began a taxi back downwind to the take off point. He said, "I got it" and raised the tail and began taxiing faster. From time to time, he turned around to tell me what I had done wrong. As we were passing a shack, whoops, here came another Stearman right in front of us. No way we could miss. We crawled right up his tail with our prop making red and white confetti out of his rudder; flipped over inverted on top of the other airplane with the leading edge of our wing cutting a big crease about 6" behind that other cadet's head.

I guess we were both 'kinda in shock, but with gas leaking all around, I had the presence of mind that I didn't need to hang around there upside down anymore. I cut the switches and, not thinking, I pulled my safety belt latch and promptly fell out on my head. I felt sorry for my instructor. That really hit him hard since he had years of flying experience, and that was the first time he had ever dinged an airplane. They took us to the hospital for a checkup, but we both checked out fine and were flying the next day.