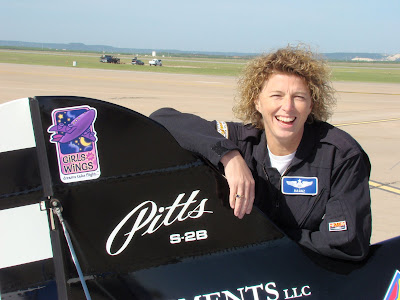 Girl With Wings Jill Long features the GWW logo on her Pitts airplane.

A Lieutenant Colonel in the U.S. Air Force, Jill “Raggz” Long has been flying since she was 16. Her dream of flight can be traced to an airshow she attended at the age of six, where after seeing the performers, she proudly declared, “That’s going to be me!”

The only woman to be selected to cross-train into the A-10 “Warthog” or “Tank Killer” after six years in the KC-135 Stratotanker, she has accumulated over 3000 military flight hours and 50 combat missions in the Global War on Terrorism. Born in Michigan and raised in Oregon, Jill lives with husband, Chuck, in Wichita Falls, TX, and is stationed at Sheppard AFB as the 80th Flying Training Wing Director of Staff and a T6 Texan II instructor/evaluator pilot charged with training future combat pilots at Euro-NATO Joint Jet Pilot Training (ENJJPT), as well as pursuing her personal dream of flight by performing in airshows in her Pitts S2B “The Ragged Edge,” inspiring millions each year, and encouraging young and old alike to follow their dreams!

Jill avidly shares her experiences as a military combat fighter pilot, instructor/evaluator pilot and airshow performer. Equipped with Finance, Business Administration & Marketing Bachelor’s degrees, and a Master’s in Management, she is living proof that no matter what path a person takes… with vision, passion and commitment they can SOAR! She and her husband Chuck partnered their airshow business with inspirational/educational programs including US Space and Rocket Center’s Space Camp and Aviation Challenge, and the Experimental Aircraft Association’s Women Soar and Young Eagles. Jill was the recent winner of the Air Education and Training Command’s 2008 Science, Technology, Engineering and Math Role Model Award.

She often states, "You don’t have to be the smartest person, or the most talented… you just have to believe in yourself, and you’ll find the strength to follow your dreams. Programs such as EAA’s and US Space and Rocket Center’s help young women and men find that strength and develop key lessons for life! We need to emphasize avenues that reach out to and encourage people to aim for the stars and follow their own dreams."